Required to scrub the exhaust of Bruce Mansfield’s three coal-fired supercritical boilers, plant staff built in 1998 five forced-oxidation gypsum (FOG) columns to turn the output of the scrubbers into commercial-grade gypsum for a drywall factory next door. "We use a lime slurry to convert the sulfites and sulfates," Mezan explained. "The slurry goes into a thickener and settles out. Then we pump the solids into the FOG plant, where the environment is hot, turbulent, and corrosive."

Measuring the slurry level in the five FOG columns (Figure 1) had been rendered impossible by the extreme environment. "The readings we need don’t have to be very precise—between 6 inches and 1 foot," said Mezan. "Manual monitoring was out of the question due to the steam and roiling material inside the columns." 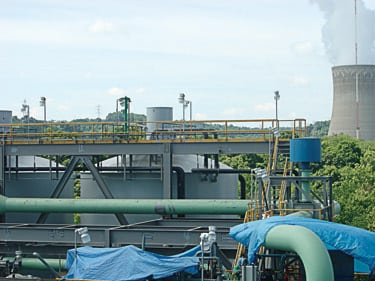 1. Slurry up. FirstEnergy Corp.’s Bruce Mansfield plant uses forced-oxidation columns to convert the calcium-sulfite waste of its SO2 scrubbers into gypsum, the essential ingredient of wallboard. Courtesy: SOR Inc.

FirstEnergy had attempted automated level measurement a few years earlier by installing stainless steel units using radar frequencies. "The highly corrosive slurry simply ate them up within a year," Mezan recalled. "When we pulled them out, they looked like Swiss Cheese. We knew we needed a level measurement system that could handle a very tough environment." Mezan then heard about echOsonix sonic/ultrasonic level sensors from SOR Inc. (Lenexa, Kan.).

Mike Minteer of Advance Instruments Inc. in Canonsburg, Pa., suggested replacing the radar units with echOsonix units. By now, Mezan was skeptical that anything would perform in the extreme conditions, but he took Minteer’s word that the SOR units, which are made of polypropylene and are Teflon-faced, could withstand the rigors of the harsh environment (Figure 2). 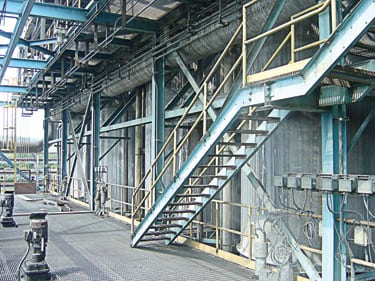 Minteer and SOR Business Manager Kamal Khan arrived in Shippingport in June 2005 to install a single 10-kHz unit. Before the day was out, FirstEnergy had purchased four additional units for the remaining oxidation columns plus two more for the plant’s lime powder silos.

Khan recalled a big surprise he got during installation of the units: "We discovered that the tops of the columns had been extended 10 feet by a fiberglass tube containing a baffle structure resembling an egg crate," he said. "As a result, any level sensor would be challenged not only by dense steam and condensate but also by the constant turbulence the baffles create. Guaranteeing accurate readings both below and above the baffles could have been problematic. However, the high-power, low-frequency, and adaptive-gain features of the echOsonix units enabled us to quickly dial in the proper settings."

After six months on the job, the echOsonix units were still producing accurate readings. Mezan is delighted: "We’re currently in process of doubling the number of oxidation columns we use. We plan to install echOsonix transmitters in the five new ones as well."

There are three echOsonix models whose operating frequencies range from 5 kHz to 30 kHz. All use sound waves to penetrate fluids such as steam and foam, which block higher frequencies. This is the same principle that makes foghorns effective. To ensure that echoes bouncing off the surface of targets are strong enough to be detected by a sensor element coated with condensate or deposits, the pulse sent out by the echOsonix’s transmitter section can be made as loud as a heavy-metal concert: 138 dB.

As mentioned, echOsonix units have an adaptive-gain feature. When process conditions weaken return signals, the gain of the receiver section is automatically increased until signals can be read reliably. Once conditions return to normal, the sensitivity is automatically reset to its previous level to avoid reading false echoes. Finally, the low-frequency feature of the echOsonix units enables them to be placed as much as 260 feet above the echo-producing surface.

—Contributed by Russ Carlson, level products manager for SOR Inc. He can be reached at rcarlson@sorinc.com.

Much money is wasted by failing to account for the substantial impact of internal pressure and flue/duct plate stiffener geometry on the design and installation of insulation and lagging.

In fact, the size, shape, and arrangement of stiffeners (Figure 3) are the first things to consider when designing insulation and lagging for a new boiler or selective catalytic or noncatalytic reduction (SCR or SNCR) system. Stiffener sizes have changed over the years. Because stiffeners of the past were designed for a much lower water gauge pressure, they were small enough to allow insulation to be placed between them without having to be cut to fit. Today’s stiffeners are much larger and much farther apart for two reasons: higher internal pressures and the failure of design calculations to account for the insulation thickness required by the application. 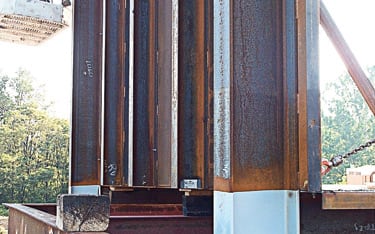 Over time, boilers and air-pollution control systems and their flues and ducts have actually become harder to insulate and lag effectively. There are several reasons for that. One is the length of today’s typical stiffener (greater than 7 inches). Another is that modern equipment tends to run hotter. When consistently exposed to temperatures above 400F, the binder within mineral wool-type insulation becomes prone to burnout. Maintaining the integrity of the insulation in the face of equipment vibration requires supporting it at both the bottom and top. A third factor is business-related. It has become standard practice among original equipment manufacturers of boilers and SCR and SNCR systems to subcontract the job of insulating and lagging their gear to the lowest bidder. The cheaper the system, the shorter its life expectancy.

In addition to the duct pressure and temperatures that the insulation/lagging system is designed for, the arrangement of stiffeners depends on flue and duct design as well as stiffener sizing and spacing. Designing the flue or duct arrangement or the casing for an SCR or SNCR box is no easy task. The three key factors that affect insulation and lagging design are space constraints, gas temperature, and internal pressure. In the author’s opinion, internal pressure is the most important but the least understood.

Stiffeners are essentially sized for a particular span, pressure, and temperature. However, expected stresses and deflection may impose their own limits. As a result, it is best to wait until the flue or duct system has been laid out before structurally designing the individual components of its insulation/lagging system (including stiffeners) to withstand the following forces: