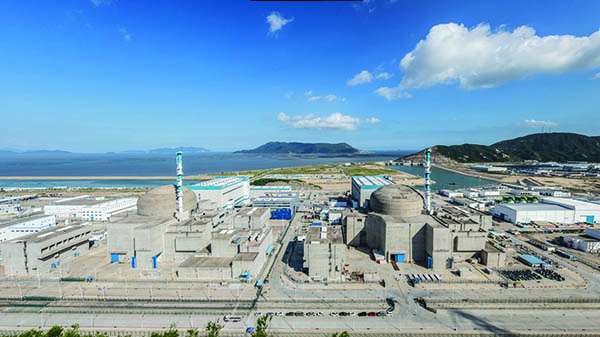 Unit 1 at the Taishan Nuclear Power Plant in China is the site of a milestone for nuclear technology. It also illustrates cooperation between France and China, using the lessons learned from earlier projects and providing a roadmap for future reactor construction.

The nuclear power industry is a global enterprise. Construction of a nuclear plant today requires cooperation from a number of companies involved in reactor technology, along with a range of contractors experienced in nuclear plant design.

Government support is crucial, not only from lawmakers and regulators where the plant is sited, but also from those in countries from which nuclear technology may be imported. National and international atomic energy agencies also are involved. 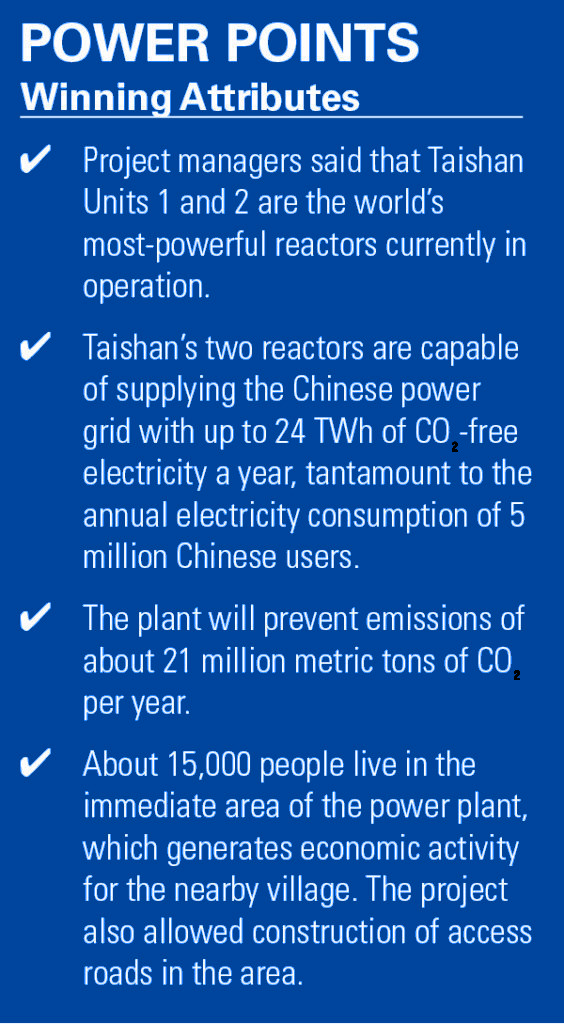 The planning behind the Taishan Nuclear Power Plant in Taishan, Guangdong province, in China was no different. Support from many groups was required to move the project from its early stage—excavation work for the plant began in 2008—to commercial operation, which occurred when the 1,750-MW capacity Unit 1 came online a decade later, in December 2018.

Bringing the plant online was a milestone for nuclear technology. Taishan Unit 1 is the world’s first operational EPR, or Evolutionary Power Reactor, to enter service. The EPR is a third-generation pressurized water reactor design, a technology initially developed by France-based Électricité de France (EDF) and its Framatome subsidiary. (Germany-based Siemens was also part of the original design group for the EPR before ending its nuclear operations.)

Bringing Taishan online (Figure 1) was a triumph for EDF and Framatome, as well as China General Nuclear Power Group (CGN). The Taishan project is led by Taishan Nuclear Power Joint Venture Co. (TNPJVC), a joint venture founded by CGN (51% ownership stake), EDF (30%), and Chinese utility Guangdong Energy Group (19%), also known as Yuedian. Earlier EPR units, at projects at Olkiluoto in Finland and Flamanville in France, have yet to come online, as construction of those nuclear plants has repeatedly been delayed. EDF recently said the first of two EPRs at its Hinkley Point C project in the UK could be completed in 2025.

How did Taishan reach the finish line first? The project principals told POWER they want to “stress the fact that the Taishan EPR is a Franco-Chinese project. Both the strength of the Chinese industry and the knowledge of the EPR technology of French nuclear leaders EDF and Framatome allowed the Taishan project to go faster, according to the highest standards of safety and quality.”

The project managers in China told POWER: “It is a real advantage to start after one or two projects,” noting that “Taishan benefited from the experience of all EPR sites around the world. Many good practices were identified in Flamanville 3, and Taishan benefited from this feedback. It has become a real win-win partnership. EDF with its Framatome subsidiary brought EPR technology [reactor design and all studies] as well as Flamanville 3 feedback, a key factor in Taishan’s success.”

China has at least 48 operating nuclear reactors, according to the International Atomic Energy Agency’s (IAEA’s) Power Reactor Information System. Another nine reactors are under construction, according to IAEA. Those 48 operating today include not only Taishan 1 but also the 1,750-MW Taishan Unit 2, which entered commercial operation in September.

The Taishan timeline for both units reads like this:

Chinese officials have said the Taishan plant is the largest energy project on which France and China have collaborated. EDF and CGN have worked together for more than 35 years, beginning with the construction of China’s first commercial nuclear power plant at Daya Bay on the shore of the South China Sea. EDF noted that it became the first foreign investor in Chinese nuclear power projects through its participation in the Taishan EPR project. The company also is working with China to develop that country’s renewable energy and energy services.

Officials who worked on the Taishan project told POWER that the current nuclear power “situation in China is comparable to what was experienced in France during the 1980s with the construction of the French nuclear fleet. It is true that for the past 30 years, the Chinese nuclear industry has not stopped building reactors.”

Project managers told POWER that “200 EDF engineers were dedicated to the Taishan project to provide their expertise in areas such as safety, civil engineering, mechanics, and testing. EDF played a key technical role at key milestones such as overall testing and hot testing. EDF has trained the plant operators and will continue to support them.”

Companies involved in supplying equipment to Taishan Unit 1 include Framatome, which manufactured the steam generators and pressurizer in France, and China’s Dongfang Electric Corp. (DEC), which manufactured the Arabelle turbine in the engine room. That turbine was designed and licensed by General Electric. Other equipment suppliers for Unit 1 include Mitsubishi (reactor vessel); SKODA, a Czech company (core internals); and France’s Jeumont Electric, which along with DEC provided primary pumps.

The project principals told POWER that “more than 15,000 workers were mobilized during the busiest periods of the construction phase” at Taishan, and said “nearly 800 people will be required to operate both reactors.” They noted that “The period between fuel loading and commercial commissioning has been reduced by three months [five months for Unit 2 compared to eight months for Unit 1]. Hot testing (before the commissioning phase) lasted 46 days for Unit 2 instead of 150 days for Unit 1. We can explain this difference because the tests of the Unit 1 were a ‘first-of-a-kind.’”

Officials said Taishan and Hinkley Point C (HPC) feature the same reactor technology, based on the EPR model at Flamanville 3. “However, some arrangements have to be made to take into account the local context, regulations, and topology,” they told POWER. “For example, the choice of a thermal power of each reactor slightly higher than that of Flamanville 3 (4,590 MWth at Taishan versus 4,300 MWth at Flamanville) to take into account the decrease in efficiency due to a warmer cooling water.”

Zheng Dongshan, CEO of CGN UK, said when Taishan Unit 1 began commercial operation: “Safe and efficient connection of the new Taishan 1 reactor to the grid is a major step forward in China, but is also important for the UK, where the same EPR technology will be used at Hinkley Point C and Sizewell C. The fact that an EPR power station has been linked to the electricity network for the first time reinforces our strong confidence in this reactor technology and in the HPC project as a whole.”

CGN officials told POWER in late September: “The performance of Taishan 1 gives us satisfaction and is in conformity with the objectives. In particular, Taishan 1 did not experience any automatic reactor shutdown during the first eight months of operation.”

Bernard Fontana, CEO of Framatome, noted the importance of the project for his company when Unit 1 came online in December 2018. “As designer of the EPR, Framatome—now part of the EDF group—is delighted to witness the commercial start-up of the Taishan 1 project, a milestone that rewards the teams’ sustained efforts over recent years.” He Yu, chairman of CGN, said at the time: “Taishan 1’s entry into operation marks the accomplishment of the task set by the Chinese and French heads of state. As the world’s first EPR project, Taishan offers valuable lessons and solutions for the construction of similar reactors worldwide.” ■