No one in this industry underestimates the difficulty of transforming an unwieldy and distinctly nonuniform substance like coal into a fuel whose physical and chemical characteristics are consistent enough to supply a workhorse power plant boiler. Designers of fuel-handling and pulverizer systems have wrestled with this problem since the first traveling-grate furnace was invented. The more predictable a fuel is, the easier it is for engineers to tune a boiler burning it for maximum performance and minimum emissions.

From the grizzly to the burner tip, the pulverizer plays an essential role in maximizing the consistency of fuel delivered to the steam generator. Most existing pulverizers—both the vertical-shaft and ball-mill types—come with a static classifier. Its blades reject coarse particles to produce a stream of coal particles that are mostly about 0.0029 inches (74 microns) across.

Obviously, not all of the particles leaving the pulverizer are that size. The fineness of coal is measured using a U.S. standard sieve with a sleeve opening of 0.0030 inches. Particles smaller than 74 microns will pass through a 200-mesh screen, and those larger will not. Passing coal through several screens in series yields a profile of the particle size distribution (PSD) of a pulverizer/classifier. The industry standard for PSD has been 70% passing through a 200-mesh sieve. Other common U.S. standard sieves are 325 and 50 mesh, which stop particles larger than 0.0017 inches (45 microns) and 0.0117 inches (300 microns), respectively.

Coarse particles of coal don’t burn as quickly, easily, or cleanly as finer particles. Because they take longer to burn, coarse coal particles raise a boiler’s average NOx emissions. They also foster agglomeration and deposition of slag, making boilers and heat-recovery boilers more vulnerable to fouling. Coarse coal can even poison the catalyst of a selective catalytic reduction (SCR) system. If enough coarse coal passes through a boiler without being burned completely, its flyash may have too much unburned carbon (UBC) for commercial use.

Upgrading a pulverizer’s classifier from static to dynamic can improve two key pulverizer performance measures: its throughput and its coal fineness. As their name implies, dynamic classifiers (see box) use static as well as rotating vanes to sort coal particles more precisely by size. Retrofitting a pulverizer in this way:

What is a dynamic classifier?

A classifier separates coarse from fine coal by allowing the fine coal to pass and rejecting the coarse particles for regrinding. A dynamic classifier has an inner rotating cage and outer stationary vanes. Acting in concert, they provide what is called centrifugal or impinging classification.

In many cases, replacing a pulverizer’s static classifier with a dynamic classifier improves the unit’s grinding performance, reducing the level of unburned carbon in the coal in the process.

The following summaries of dynamic classifier retrofit projects (classified by application) further illustrate the benefits of this technology.

A Loesche LSKS dynamic classifier (Figure 1) was retrofitted to each of four Babcock ‘ Wilcox (B’W) Model 10E10 ring and ball pulverizers at E.ON’s Ratcliffe-on-Soar Power Station in the UK. Ratcliffe has four 500-MW natural-circulation, single-furnace, dry-bottom B’W boilers. Each pulverizer has two coal outlet pipes, which then split into three smaller pipes that each feeds a B’W Mark 3 low-NOx burner (LNB). Each boiler’s 48 burners are arranged as four rows of 12.

1. Top of the heap. An LSKS dynamic classifier like this one was installed atop an existing Babcock ‘ Wilcox ball mill at E.ON’s Ratcliffe-on-Soar Power Station in the UK. Source: Loesche Energy Systems

E.ON installed the dynamic classifiers as part of its plan to comply with the new European Large Combustion Plant Directive, which calls for reductions in emissions of NOx, SO2, and particulates by 2008 and beyond. Making the typical 35% reduction in a plant’s NOx levels (to 0.42 lb/mmBtu) that the directive requires would normally necessitate adding an SCR system and/or upgrading to LNBs—at considerable cost.

E.ON, however, chose to reduce the NOx output of the Ratcliffe plant by adding an overfire air (OFA) system and dynamic classifiers. The utility took this approach mainly to ensure an acceptable level of UBC in the plant’s flyash, which is sold as filler to cement makers. But another reason was to reap the classifiers’ biggest benefit: more consistent coal particle sizing.

The first dynamic classifier was installed at Ratcliffe in July 2003, and six more followed in the summer of 2004. All of them had already passed their tests when the overfire air system was installed.

Pre-retrofit data indicated that with static classification, 75% of the pulverizers’ output could pass through a 74-micron screen, and 97.5% of particles through a 300-micron screen (Figure 2). After the dynamic classifier was installed, about the same percentage (78%) passed through the 74-micron screen, but far more (virtually all) particles could pass through the 300-micron mesh. In other words, all coarse (>300 micron) coal particles were removed from the stream of coal fed to the boiler. The slopes of the pre- and post-retrofit lines on the Rosin-Rammler graph are 31.7 degrees and 52.7 degrees, respectively.

2. Finer fuel. This chart compares the fineness of the output of a pulverizer (at 36 tons/hr) before and after the unit was upgraded with a dynamic classifier. Source: Loesche Energy Systems

As dynamic classifiers were added in turn to the other pulverizers at Ratcliffe, it became possible to compare their effect on the individual performance of each of the plant’s four identical 500-MW boilers. All had been upgraded with B’W UK’s LNBs in the mid-1990s. A 62% average reduction in UBC levels at normal excess-air levels (Figure 3) was noted during post-retrofit testing.

The retrofit’s bigger payoff, however, was a 13% average reduction in the plant’s NOx emissions (Figure 4). Testing also produced a plant CO emissions profile (Figure 5) that engineers could correlate with the NOx and UBC profiles to fine-tune operations. For example, knowing that the plant could tolerate a slight increase in CO and UBC levels, the engineers could feel safe lowering the stack O2 level by 1% or more, in order to further reduce NOx emissions.

These results were from tests conducted after adding the dynamic classifiers but before installing the overfire air system. Now that the OFA system is in place, the Ratcliffe plant can meet its 2008 NOx emissions standard using only it and the LNBs. At press time, dynamic classifiers had been retrofitted to three of the plant’s four 500-MW boilers; the fourth is slated to be upgraded later this year.

Other interesting projects in which Loesche LSKS dynamic classifiers replaced static classifiers to improve pulverizer performance include the three that follow.

Loesche dynamic classifiers were first retrofitted to the plant’s EVT Model RP 903 pulverizers on a trial basis. Later, they were added to all pulverizers of the 2,300-MW E.ON plant.

Tilbury Power Station in the UK. In 2006, dynamic classifiers were retrofitted to the five MPS Model 180 pulverizers feeding the 300-MW front-wall-fired Foster Wheeler boiler of this RWE plant. Two similar units are scheduled to be similarly retrofitted this year. Results for the project’s first phase are just in: a 50% reduction in UBC (enabling the unit’s flyash to be sold, rather than landfilled) and a distinct improvement in particle fineness. Now, >99.8% of particles can pass through a 300-micron screen (vs. 99% before), while 85% can pass through a 75-micron screen (vs. 70% before).

Dynamic classifiers can increase the throughput of a pulverizer while maintaining the fineness of its output. Such retrofits make the most sense for units burning Powder River Basin coals, whose lower heat content and higher ash and moisture content require an increase in fuel flow to maintain unit rating. They also are applicable to units that blend high-heating-value and PRB coals to maintain their output. Experience with vertical-shaft pulverizers used in the coal mining industry suggests that replacing a unit’s static classifier with a dynamic classifier would increase its throughput by more than 30% and simultaneously increase coal fineness by 10%.

Dynamic classifiers can increase both fineness and capacity, but to a lesser extent than a system optimized to increase one or the other. Again, experience with vertical-shaft pulverizers at coal mines suggests that capacity increases of 10% to 35% and increases in fineness of 25% to 50% are achievable.

One size doesn’t fit all

A dynamic classifier is retrofitted to a vertical-shaft pulverizer by installing a duplicate upper pulverizer casing that houses the classifier’s fixed and rotating vanes, motor, and drive connections. A typical dynamic classifier assembly has a center coal feed pipe and several coal outlet pipes (Figure 6). The rotor drive is mounted on the side of the casing and driven by a belt. If the coal feed is off-center, the drive can be directly coupled, as was the case at the J.B. Sims Power Plant in Michigan (Figure 7). 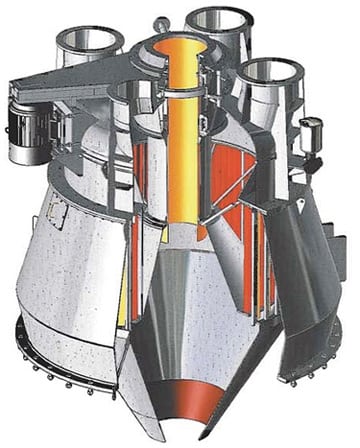 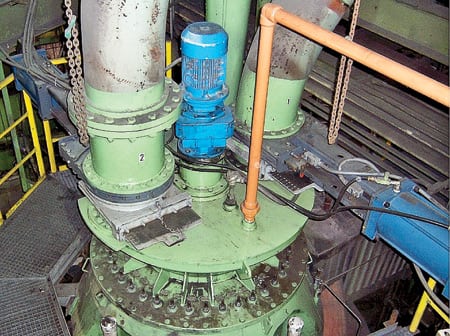 7. Nice installation. At the J.B. Sims Power Plant in Grand Haven, Mich., retrofitting each of three LSKS dynamic classifiers required mounting a direct drive for it in the center of the existing Model EL 56 pulverizer. Courtesy: Loesche Energy Systems

In most cases, dynamic classifiers can be installed as "slide-in" retrofits with little need to move existing equipment. Figure 8 shows another type of dynamic classifier, with one inlet and outlet, favored by the cement industry. 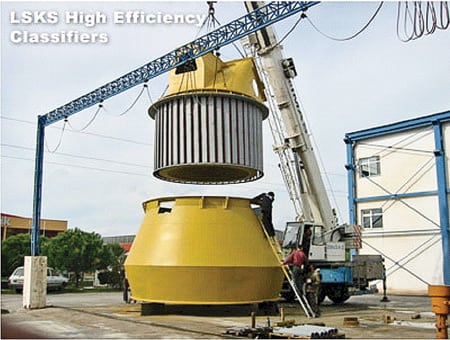 8. Top of the mark. This large LSKS dynamic classifier with one inlet and one outlet is being assembled prior to delivery to a cement plant. Courtesy: Loesche Energy Systems

It should go without saying that gains in fineness, capacity, or both, depend on many factors, such as the type of coal, the brand of existing pulverizers, and the design of the overall fuel-handling system. Likewise, the costs of a retrofit are site- and unit-specific, not so much for "as found" equipment but as a result of fuel system or other unit modifications.

To get you in the ball park, consider the following basic cost analysis recently completed for one of our customers. Only the final results are shown:

For this job, the break-even point for fuel savings alone is estimated at 2.4 years. The break-even on fuel savings plus NOx credits is 1.6 years (which falls to 1.3 years if revenues from sales of flyash with less UBC are factored in).