Bechtel’s long experience with steam generator (SG) replacements prepared it for perhaps its most ambitious project to date. As the prime contractor, Bechtel replaced four SGs and a reactor vessel head in Unit 1 during an outage that lasted just 55 days—eight days less than the previous record for a PWR SG replacement outage alone and 10 days under the original aggressive goal set when the project was awarded to Bechtel in 2004.

Logistical support for nuclear plants is not a U.S.-centric business these days, and the world’s few nuclear-capable manufacturing facilities have plenty of business. Luminant made its purchase of new steam generators in Spain, transported them by barge to Houston, and then delivered them to the plant by a specially equipped train. Train tracks to the plant were upgraded to handle the loads because they had not been used since the plant was built. The new reactor vessel head, also fabricated in Spain, was outfitted with new control rod drives in Pennsylvania, transported by barge to Houston, and then trucked to the site.

Space is always at a premium in the design of a power plant, but it seems lack of maneuvering room for steam generator replacement is something every nuclear plant has in common. Comanche Peak is certainly no exception. Perhaps the biggest challenge facing the project team was the lack of access to the existing steam generators, each of which measured about 70 feet long and 15 feet in diameter and weighed about 400 tons (Figure 1). During original plant construction, the containment structure around the nuclear steam supply system was completed after the steam generators were installed—leaving no panels or hatches that could be used for removing and replacing the steam generators. 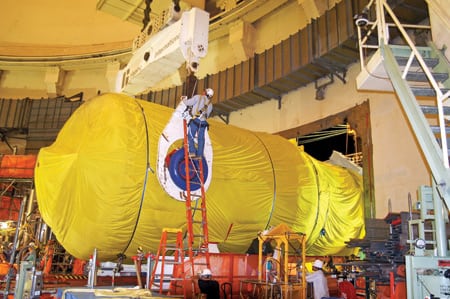 Lack of access meant the first order of business was to locate an appropriate spot for an opening in the containment wall large enough for SG removal and replacement. Given the configuration of the containment vessel, internal crane access, and equipment arrangement, the opening had to be positioned approximately 100 feet straight up the wall and directly above the containment building’s only equipment hatch.

Sharing work space among multiple task crews tends to reduce productivity during an outage, but extensive planning and coordination allowed the crews to open—and subsequently close—the side of the containment structure without hindering the flow of tools and equipment through the equipment hatch.

Hydrodemolition was used to remove the concrete for the containment alternate access, or opening, in the containment building (Figure 2). Hydrodemolition uses a water jet at 20,000 psi flowing at 300 gpm through four 3/8-inch rotating nozzles to surgically slice through the reinforced concrete. The robotically controlled water jet made short work of the concrete demolition. Workers manually marked, cut, and dressed each layer of rebar when exposed by the water jet and then removed 400-pound sections using ropes, pulleys, and muscle. 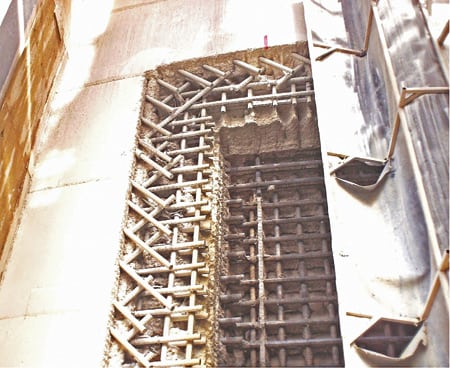 2. Good housekeeping. Exposed reinforcing bars and a clean concrete cut are all that’s left after hydrodemolition of a containment alternate access. Courtesy: Bechtel

Tanker trucks brought in about 1.5 million gallons of water for the 12 diesel-powered 475-hp pumps that fed high-pressure water to the water jet. The wastewater was collected and properly disposed of as specified in the various permits that were required. Luminant properly elected to import the water for the water jet rather than siphon water from Squaw Creek Reservoir, which provides cooling water for the plant. Renovating a nuclear plant is one thing, but messing with the best bass fishing in the area is quite another.

The team’s next challenge was to devise an outside lift system (OLS) to raise the steam generators more than 100 feet into the air— by far the tallest OLS ever used for replacing a nuclear steam generator (Figure 3). Their difficulty was compounded by the presence of safety-related gear located under the OLS. A belt and suspender approach was used that rigidly attached the OLS directly to the containment wall rather than leaving it freestanding. The OLS was then tested with concrete block weights totaling 500 tons—10% above the weight of the largest lift—to ensure that the assembly met code requirements. 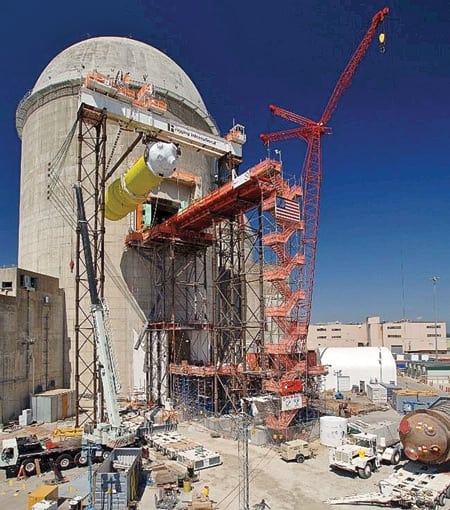 3. Out with the old. An old steam generator exiting the containment building. Courtesy: Bechtel

Six Kevlar slings were used during a SG lift to prevent components from falling in the unlikely event that a tornado might strike at an inopportune time. A strand jack system was also used instead of the traditional chain jack used by Bechtel on all of its previous SG replacement projects. The advantage: The strand jack cut the transport time from the ground to the opening from nearly six hours to under two (Figure 4). 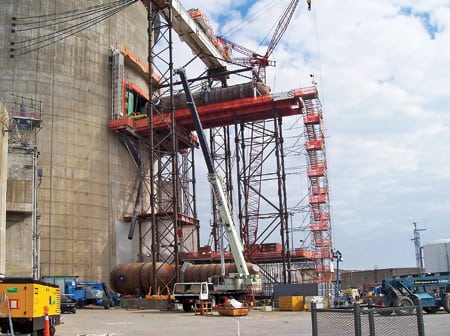 4. And in with the new. A new 400-ton steam generator begins the long trip to its cubicle inside the containment building. Courtesy: Bechtel

The biggest problem encountered during the project occurred on the first day of the outage, February 24, when north-central Texas experienced its worst dust storm in more than 20 years. Sustained winds reaching more than 50 miles per hour darkened the sky, and vapor pouring from the hydrodemolition equipment created a surreal scene. Almost all of the project’s equipment, including cranes and man lifts, had to be secured for the day. The only equipment qualified to operate that first day were the OLS and the hydrodemolition robots.

Staffing with qualified tradesmen and technicians is always a challenge these days. More than 1,300 workers were required to perform the tasks associated with replacing the steam generators and the reactor pressure vessel head. Some 900 craft workers were hired either directly or through specialty subcontractors to complete the work. During a typical nuclear plant outage, subcontractors usually handle cutting, machining, and welding of coolant piping; cutting and welding the liner plate; and insulation work. Approximately one-third of the outage work scope was originally assigned to permanent staff but was later shifted to subcontractors or new hires to the plant staff.

A tight and specialized job market requires creative methods to recruit and retain the number of qualified craftsmen required to complete a plant outage on time. One approach was to allow workers to customize their working hours as long as the 24/7 schedule was fully staffed at all times. A week before the outage started, the project switched to two, 12-hour shifts, giving workers time to acclimate to the rigorous outage schedule and providing an opportunity to sort out other logistical problems that occur during shift change, such as parking and badge checkout. Every worker was given one day off in seven, even though the outage schedule was 24/7.