POWER began its life in October 1882 as a tabloid-size publication originally entitled Steam. About the same time, two young Boston advertising salesmen decided to launch a new magazine about textile mill steam plants, called POWER. They bought Steam prior to publishing POWER’s first issue, so early issues of this magazine carried the flag “POWER, with which is incorporated Steam” (Figure 1).

1. “POWER, with which is incorporated Steam” was first published in November 1884.

The editor’s introduction to the first issue of POWER established the editorial standards we continue to follow today: “It will be aim of the Editors to make this journal an interesting and valuable practical medium of instruction and of exchange of ideas among power users, technically accurate enough to stand the criticism of the expert, and yet so popular in style and matter as to appeal directly to the fifty thousand or more power-using constituents whom it is intended to reach.

“Among the subjects treated will be how to buy, set, fire, and clean boilers; how to select, set up, run, repair, and take care of steam, gas and hot-air engines, and all other motors . . .

“The style at which we aim will be terse and clear; the matter so far as in us lies, fresh and varied. The editorial policy will be one of enterprise, through independence, and straightforwardness.

“Such a paper ‘Power’ is intended to be. It will treat only of producing and carrying power; and will reach, as far as possible, all interested in these subjects. We believe that it will be by far the best medium published, in which to advertise power generators and transmitters.”

The very first feature article reviewed a new steam engine that was prominently displayed on the issue’s cover. The editors described the Ide Engine (Figure 2) as “show[ing] a most careful appreciation, on the part of its builder, of the fact that an engine should deliver power with economical steam expenditure and little wear, and be convenient to erect, adjust, run and repair. The first thing that struck us on examining the plans, was the extensive use of steel and gun metal on working and wearing parts. 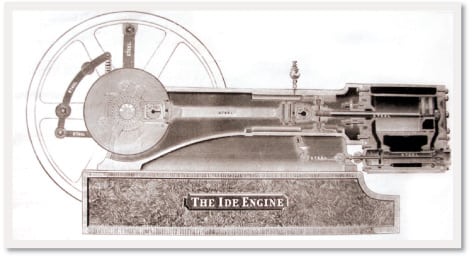 “The lower part of the frame resembles [a] box girder with cross ribs; there is a straight line vertical web . . . and a top piece straight in elevation and curved in plan, suggestive of Corliss. The bed piece has two of its bolt holes directly under the main centre, facilitating erection in level and line.”

The editors were still working out the inevitable kinks in a new publication and in a useful equipment review; the report never stated the horsepower developed, fuel consumption, price, or size of the engine.

Early issues of POWER covered many of the new maritime engines powering the generation of luxury ocean liners that entered service early in the 20th century (Figure 3). A special report this month focused on the power plant of the Cunard Steamship Line Shipping Co.’s RMS Lusitania, which had recently successfully completed her first round trip from the UK to New York City, crossing the Atlantic Ocean in less than six days. The Lusitania, at the time of her launch, was “the most powerfully-engined vessel afloat, having some 70,000 horse-power and a guaranteed speed of 24 1/2 knots in all weathers.

3. The engine room of the RMS Lusitania.

The Lusitania was sunk by the German submarine U-20 on May 7, 1915, off the coast of Ireland as she was completing her 201st transatlantic voyage. The loss of 128 Americans on board precipitated America’s entry into the First World War.

Power facilities that rely on internally generated power often find that running multiple units in load-sharing mode provides the greatest economic benefit when meeting widely varying daily loads. Load sharing today is accomplished with merely a switch setting on the governor for typical engine generators or small steam turbines. That was not the case 75 years ago, when the editors reviewed the latest load-sharing design, which was based on mechanical linkages and camshafts (Figure 4). 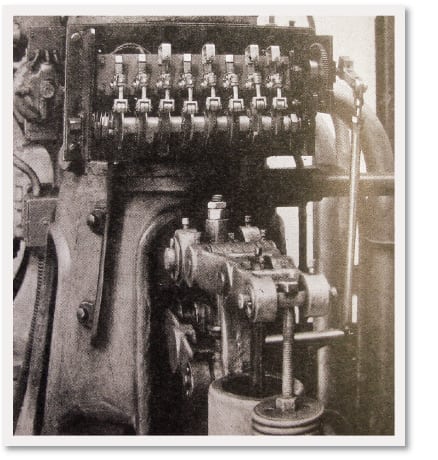 4. Turbine-valve switches actuated by the governor mechanism initiate movement of the selector switch [for parallel operation of two prime movers].

“Program load control has been developed to improve the operating efficiency of groups of turbine generators. . . . The application of automatic frequency or automatic load control in conjunction with program load control allows the use of the entire operating capacity of the station for regulation and maintains the minimum turbine heat consumption for all loads. The valve auxiliary switches (Figure 4) initiate the movement of the selector switch and may therefore be considered as the ‘brains’ of the program control. The switches [are] of such a design as to permit continuous motion without excessive wear and to provide means for close adjustment. A cam-type switch meeting those requirements was designed and installed on a turbine governor. The valve linage causes an angular movement of approximately 40 deg. and gearing at one end of the cam switch multiplies this movement eight times.”

Research on the commercial use of nuclear power was a major U.S. focus in the mid-1950s because nuclear plants promised “power too cheap to meter” and simplicity of operation (Figure 5). The first U.S. commercial nuclear power plant—located in Shippingport, Pennsylvania, and powered by a pressurized water reactor rated at 60 MW—reached full load in December 1957. 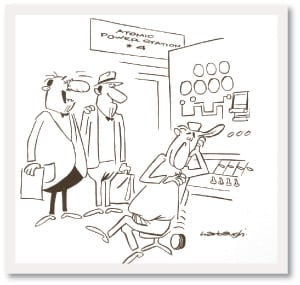 5. “Do you realize how atomic power will simplify things?”

POWER editors noted in “Nuclear Notes” that the “hard lessons of experience show that nuclear power development is tough and costly—more than originally expected. Economic and profitable atomic energy generation seems farther off in the future than first estimated; especially when compared to relatively cheap fossil fuels now available here. England and Europe, squeezed between growing power demands and diminishing fuel reserves, already face rocketing costs of imported fuels. This makes it easier to prove in costly nuclear power. Their needs may help keep our atomic industry going by furnishing a market for equipment while we keep pushing development and research.”