The nuclear industry consistently reduced its plant outage durations over the past decade to the point where a 30-day refueling outage now is considered the norm. Enhanced outage planning skills were put to the test when Omaha Public Power District’s (OPPD) Fort Calhoun Nuclear Generating Plant embarked on perhaps the most complex nuclear renovation project in the history of the industry.

Located on the shore of the Missouri River, about 20 miles north of Omaha, Fort Calhoun has a single generating unit with a capacity of 478 MW. The plant, based on the Combustion Engineering pressurized water reactor (PWR) design, first went on-line on August 9, 1973. The plant’s operating license was recently renewed for another 20 years (through 2033), although OPPD understood that many upgrades would be required to ensure safe functioning of the plant’s systems over the next 25-plus years.

Planning for Fort Calhoun’s 25th refueling outage and replacement project began in the spring of 2006 with schedule reviews conducted with all the contractors and station personnel. Bechtel Power, with more than 30 nuclear renovation projects under its belt, was engaged by OPPD to manage the project, which included more than 5,000 individual scheduled activities. Work was scheduled 24/7, so contingency plans and materials were developed for all major work packages to ensure their success.

Past projects were studied, especially those that had entailed two replacement outages, in an effort to identify the best practices that typically make the second replacement more efficient than the first. Both formal and informal team-building sessions were conducted to fully integrate all the contractors and station personnel. To help unite the various stakeholders into a single, cohesive team, OPPD’s project slogan was “One Team, One Goal.”

The scope of work that was completed reads much like a complete plant equipment list. Inside the containment building the plant’s two steam generators, reactor vessel head, and coolant system pressurizer were replaced. It was the first time all those components were replaced during a single outage. All were manufactured in Japan and sent by barge to the project site (Figure 1). (The main condenser and moisture separators had been replaced during a 2005 outage in preparation for this outage.)

The team also installed upgraded “rapid fueling” features, including a cable bridge, and performed asbestos abatement on the steam generators and pressurizer. Outside the containment building, the plant’s main station transformer and low-pressure turbines were replaced. In addition to routine maintenance activities planned for every outage, one-third of the fuel assemblies in the reactor core were replaced.

One challenge faced by Bechtel was that this containment structure is the only one in the U.S. with post-tensioned tendons arranged in four layers using a helical pattern, with the tendons running in a curved diagonal from top to bottom. To cut the 15-foot-diameter hole in the 4-foot-thick reinforced concrete wall, Bechtel had to remove (and subsequently replace) 68 tendons and detension an additional 40 tendons—much higher numbers than the company had encountered on other post-tensioned containment structures. The crew cut the hole in the shape of a hexagon (Figure 2) to minimize the number of tendons severed. 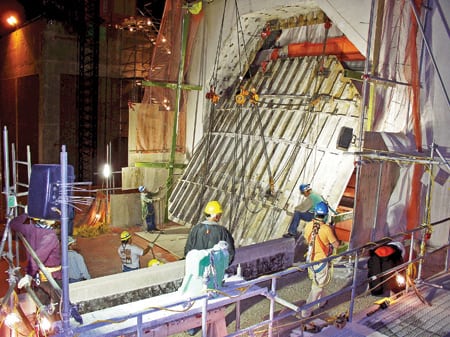 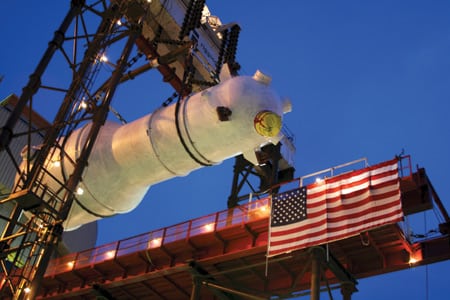 3a. High-wire act. The new steam generator was raised 80 feet into the air, at the rate of 1 inch per minute, before being slid into the containment building. Courtesy: Bechtel Power 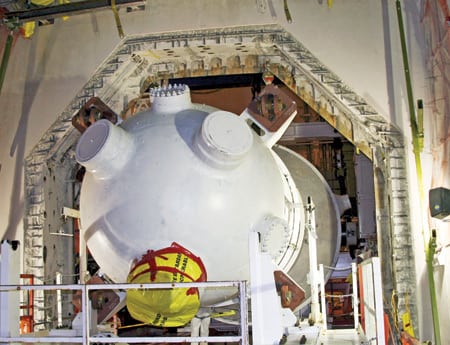 3b. Tight squeeze. The steam generator was winched into the containment building. Courtesy: Bechtel Power 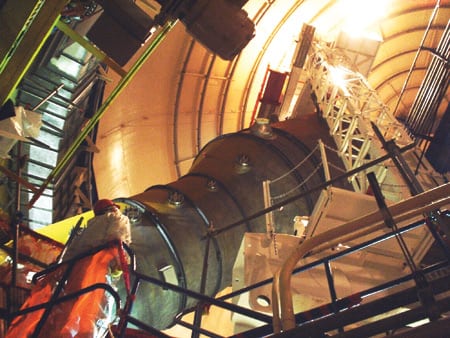 3c. Hold on tight. The new steam generator was then rigged by workers and lowered into place. Courtesy: Bechtel Power

All these circumstances—added to the significant number of pipe welds required to reconnect the systems, post-weld heat treatments, nondestructive examinations, and hundreds of support tasks such as designing scaffolding and temporary systems for power and air—made this outage the most challenging ever undertaken.

The project staffing plan was a key element in the project’s success. More than 650 OPPD employees were supplemented by more than 1,800 contract employees. OPPD staff developed “outage success teams” to handle contractor needs, from obtaining parking permits to issuing badges and safety equipment and completing initial contractor training. In previous outages, running contract employees through the indoctrination program had taken about 50 hours. During this outage it took only 32 hours.

The lessons learned from OPPD’s renovation project have far-reaching consequences for the next generation of nuclear plants. We now know that multiple major pieces of equipment can be placed in the containment structure in very short order and that the work can be controlled to meet a defined schedule and budget—assuming that project managers commit to an equally detailed level of outage planning. The industry would do well to examine Fort Calhoun’s successful outage plan as a potential template for the future, when new construction schedules will need to be significantly shortened if new projects are ever to get off the drawing board.

OPPD’s rigorous planning paid off. In addition to accomplishing the most challenging outage in the industry, the work at Fort Calhoun was done safely with no lost-time accidents and came in some $40 million below the $417 million OPPD had budgeted. The project was completed on December 3, 2006—five days early.