China has put its nuclear power plans on a fast track, kicking off a construction frenzy worth billions of dollars. In the latter months of 2008, the nation inaugurated construction of seven reactors, and in 2009, work will begin on another 10.

In November, work began on a six-reactor nuclear power plant in the eastern coastal province of Fujian. The first two reactors (each 1,080 MW) of the $14.6 billion facility will become operational in 2013 and 2014. In mid-December, the China Guandong Nuclear Power Group started construction on the $10.1 billion Yangjiang nuclear power plant (Figure 3) in Dongping Town, Yangjiang City. The first of six domestically engineered CPR-1000 pressurized water reactors (each 1,080 MW) is expected to come online by 2013, with all units being completed by 2017. 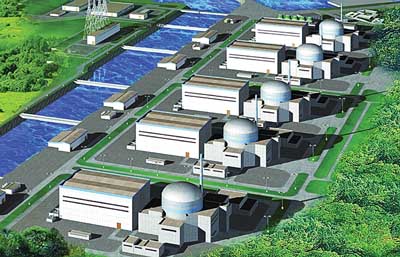 3. Yangjiang nuke. An artist’s rendering of the Yangjiang nuclear power plant currently under construction in Yangjiang City, in southern China’s Guangdong province. The facility will comprise six units, each with a capacity of 1,000 MW. China is looking to build several large nuclear projects in 2009. The country’s target is to increase nuclear capacity from 9 GW to 60 GW by 2020. Courtesy: China Guandong Nuclear Power Group

This year, the nation will start work on four nuclear power stations, in Haiyang, Rongcheng in eastern Shandong province, Sanmen in eastern Zhejiang province, and Yaogu in southern Guangdong province. The Haiyang and Sanmen stations will use Westinghouse’s AP1000 technology. The Yaogu station in Guangdong will use AREVA’s EPR. The Rongcheng station, developed by China Huaneng Group, will use a high-temperature, gas-cooled technology.

According to The China Daily, the nation’s plans are being fueled by a new energy blueprint proposed by the National Development and Reform Commission, which was spurred by rapid growth in demand and consequent power shortages.

The most populated nation in the world is at the same time trying to tackle air pollution problems stemming from its widespread use of fossil fuels — about 80% of its electricity is produced from coal. The new blueprint puts China’s nuclear power capacity target at 60 GW by 2020 — a 50% jump from an earlier goal. That means the nation, whose 11 reactors currently produce a combined 9 GW at capacity (or about 1.3% of the nation’s total power), must add about 44 new reactors by 2020 — or about four reactors every year. And if China sticks to its plans, it could source about 130 GW of nuclear power from about 100 reactors by 2030.

The recent announcements are only the beginning. They are part of China’s 10th economic plan, which calls for 25 new reactors to start operations between 2010 and 2016. Another 18 have been ordained by the more recent 11th economic plan; these should come online between 2014 and 2017.

All new reactors will use third-generation technology, with domestically engineered designs taking priority. Of particular prevalence is the CPR-1000, or "improved Chinese Pressure Water Reactor," a French-derived three-loop unit with 157 fuel assemblies. This technology is even being used in the nation’s first plant expansion, which was announced at the end of 2008. The two CPR-1000 reactors with a total capacity of 2,160 MW officially entered the construction phase at Fangjiashan, near the existing Qinshan power plant in Zhejiang province. These are scheduled to begin operations in 2013 and 2014.

China plans to fuel its expanding nuclear fleet in the short term with domestic supplies, even though its uranium ore has been deemed low-grade and production is inefficient. In the long run — and to otherwise balance shortfalls — the nation will import uranium from Kazakhstan, Russia, Namibia, and Australia.

China has also considered and set up solutions for nuclear waste management: It already has a closed – fuel cycle strategy for spent fuel, and it has built a centralized spent fuel storage facility with a storage capacity of 550 tons that can be doubled. As well as hosting a pilot reprocessing plant using the Purex process, the country has also signed an agreement with AREVA to determine if it is feasible to set up a reprocessing plant for used fuel and a mixed-oxide (MOX) fuel fabrication. This 800 ton/year facility will likely be Gansu province, and it will be operated by AREVA from 2025 onward.