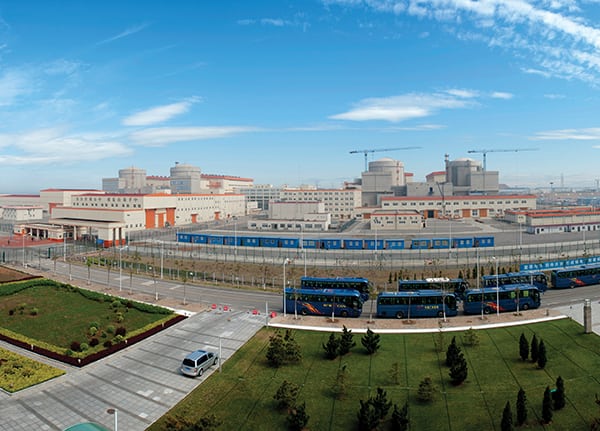 While other countries move to reduce or eliminate nuclear generation, China has been rapidly expanding it. With 27 reactors under construction, its installed nuclear capacity is expected to more than double by 2020. The Hongyanhe facility is one example of nuclear’s growth in China and represents multiple firsts.

China is powering up. The country’s generation capacity grew from 357 GW at the end of 2002 to 1,259 GW by the end of 2013, according to a report by London-based independent energy business consultancy Precergy Ltd. During this timespan, 77 GW of older, less-efficient coal capacity was removed from service—as environmental issues became more of a priority in China’s power-sector policy—making the increase all the more impressive. To get a better feel for what that means, consider this: The country added, on average, more than 1,700 MW of new generation every week for 11 straight years!

While over 63% of Chinese generation capacity is still coal-fired, that percentage is expected to decrease to less than 50% by 2023. Although a significant portion of the new generation that is likely to be added over the next 10 years is forecast to be from renewables (535 GW, according to Precergy’s estimates), heavy government support is driving nuclear and gas-fired capacity additions too.

“The Chinese government has never wavered [in] its firm determination to support nuclear energy development,” said Ma Xingrui, chairman of China’s Atomic Energy Authority, in a statement to the 57th General Conference of the International Atomic Energy Agency (IAEA) during its meeting in Vienna in September 2013.

“China has witnessed the ups and downs in world nuclear power development. However, we have never ceased the efforts in design and construction of nuclear power plants, and thus accumulated rich experience in operating multiple types of nuclear reactors.”

China leads the world in nuclear power plants under construction by a wide margin. According to the IAEA, 27 of the 70 reactors currently being built around the world are going up in China. That is nearly three times the number of reactors that Russia—at number two—is working on, and more than five times the number of reactors under construction in the U.S.

The country has managed to keep costs down, too. While costs of construction for nuclear power are escalating around the world, Precergy claims the Chinese have maintained stable, if not falling, prices as indigenization of Westinghouse AP1000 technology takes root. Several agreements have been signed with other global nuclear equipment providers, which will allow development of Generation III technology domestically, further strengthening China’s manufacturing and design knowledge base.

Several critical nuclear plant components, including reactor pressure vessels, must be manufactured at facilities with ultra-large forging capability. A global problem for the nuclear industry is the shortage of these types of facilities. As a consequence, lead times can be years for some components, and delays can stall projects. Fortunately for the Chinese, two of the four sites in the world capable of ultra-large forging are in China.

When ultimately complete, the facility is slated to have six units. The first four units are part of phase one, all beginning construction during a two-year period, which began Aug. 18, 2007, when work on Unit 1 commenced. Construction on Unit 2 began about seven months later, followed by work on Units 3 and 4 in 2009. Approval of phase two is expected by the end of this year.

The first four units are all of the CPR-1000 design, which is a pressurized water reactor (PWR) with a net electrical capacity of 1,061 MW. The design is based on the French CPY plant, which utilizes three cooling loops. Some sources have speculated that Units 5 and 6 will be of the CAP1400 design, also a PWR but based on the Generation III technology used in the AP1000 design.

Costs for phase one of the Hongyanhe project are expected to be¥50 billion ($8 billion) when complete. Once all four units enter commercial operation, it is anticipated that the facility will generate 30 TWh of electricity annually, roughly 16% of the annual consumption in Liaoning Province.

Most of the plant equipment for Units 1 and 2 (about 75%) was procured locally, much from the China First Heavy Industries Group manufacturing bases in Dalian. Units 3 and 4 will likely obtain 80% of materials from local sources. For example, steam generators were produced by Shanghai Electric Group and the plant’s emergency diesel generators were also domestically manufactured.

One Step at a Time

Dome lifting and placement on the nuclear island is a massive undertaking, which requires heavy cranes to perform. In August 2009, China Nuclear Industry Zhongyuan Construction Co. successfully completed the dome lift on Unit 1 with a radial deviation of only 5 mm and a circumferential error of only 2 mm. The result met all safety and quality assurance requirements, and represented the end of the main civil work on the nuclear island.

Hydrostatic testing of the Unit 1 steam generating system was completed on Aug. 20, 2011. The process required system pressure to be held at 12.85 Mpa (1,864 psia) for 30 minutes. The test was completed five days ahead of schedule and was a major milestone accomplishment.

The last of 157 fuel assemblies was placed in the Unit 1 core on Nov. 26, 2012, under the watchful eye of supervisors from the Northeast Nuclear and Radiation Safety Supervision Station—one of six in China—of the State Environmental Protection Administration, who are responsible for nuclear safety and radiological oversight. Less than two months later, the unit reached its first criticality on Jan. 16, 2013, which marked the start of power operation. (“ Criticality”  denotes that an operating reactor’s neutron population is stable and the fission chain reaction is self-sustaining.)

From there, the next step in the commissioning process was to generate electricity, and that didn’t take long. On Feb. 17, 2013, Unit 1 connected to the grid for the first time. As is the case with most construction projects, some final punch list items required completion, but on June 7, 2013, Hongyanhe Unit 1 began commercial operation.

From the beginning of construction on Aug. 18, 2007, through the milestones of civil works, equipment installation, system commissioning, fuel loading, reactor criticality, turbine run-up, initial synchronization of the generator, and finally, commercial operation, Unit 1 was completed in under six years. Unit 2 followed (Figure 1), beginning commercial operation on May 13, 2014.

The plant also has some other unique features. It was the first nuclear power plant in China to use a desalination system. The system can supply 10,000 tons of freshwater per day (roughly 2.5 million gallons per day) for plant operation and base staff needs. It also has special marine equipment installed to monitor sea conditions and avoid clogging water intakes in ice-prone areas. The system can measure temperature, ice floes, velocity, and other parameters.

The Hongyanhe plant continues to demonstrate excellence in operation. Unit 1 generated 5,857 GWh of electricity in 2013, and operated flawlessly for 287 days with no unplanned shutdowns or safety incidents. On Mar. 20, 2014, the unit was shut down to conduct its initial overhaul (Figure 2). Removal of the spent fuel assemblies was completed in under 11 days—impressive for a first-time evolution. Going forward, the plant expects to operate on an 18-month refueling cycle.

“This year marks the 30th anniversary of China’s membership at IAEA,” said Wang Yiren, vice chairman of the China Atomic Energy Authority at the June 2014 IAEA Board of Governors meeting in Vienna. “The past three decades [have] witnessed China’s nuclear energy endeavor attaining phenomenal achievements thanks to its hard work at home as well as international cooperation.”

A strong example of China’s nuclear achievements, the Hongyanhe Nuclear Power Plant is a worthy POWER Top Plant. (The company declined the opportunity to contribute to this article. Information and images were sourced from publicly available press releases.) ■