St. Johns River Power Park (SJRPP) is a two-boiler, 2 x 660-MW station jointly owned by JEA (formerly Jacksonville Electric Authority) and Florida Power & Light (FPL). JEA is the plant operator. The Foster Wheeler boilers went into commercial operation in 1987 and 1988. Each boiler has seven OEM vertical spindle pulverizers (mills) and 28 OEM low-NOX burners in an opposed, wall-fired configuration. Since 2005, the boilers have typically fired a blend of 70% Colombian coal (or, to a lesser degree, domestic coal) and 30% delayed petroleum coke.

Beginning in the spring of 2002 and concluding in spring 2005, the plant upgraded its combustion equipment to lower NOX, CO, and loss on ignition (LOI). This positioned the plant to meet future compliance with the Clean Air Interstate Rule. The work included advanced low-NOX burners, windbox modifications, an aerodynamic overfire air system, coal pipe orifice valves, and a permanently installed microwave-based coal flow–monitoring system.

With the new equipment, the plant was successful in obtaining the desired emission reductions. An additional benefit was that these reductions allowed the plant to increase petroleum coke consumption from 20% to 30%. However, as fuel prices continued to climb, more emphasis was placed on burning lower-grade fuels. Specifically, one of the plant’s long-term coal contracts was set to expire, and significant fuel savings could be realized if this coal could be replaced with lower-grade coal.

Noting that the OEM mills’ throughput was preventing this option, SJRPP invited Sure Alloy Steel Corp. (SAS) to perform an evaluation of the total fuel system. A comprehensive systemic evaluation was carried out consisting of data review, equipment inspections, and operational observations. In-depth interviews with plant personnel revealed recurring operational and maintenance problems as well as significant historical issues.

From 1997 through 2004, SJRPP’s fuel supply consisted of 80% coal and 20% petroleum coke. The coal was supplied under two separate long-term contracts; the petroleum coke was purchased on the spot market. Due to the fixed price of the contract coal, SJRPP’s aggregate fuel cost remained largely unaffected by rising fuel prices in 2003 and 2004. Only the 20% component representing petroleum coke was affected by market forces.

As the differential price between petroleum coke and coal remained substantial, there was a distinct advantage in burning petroleum coke. Because of the combustion improvements on Units 1 and 2 in 2003 and 2004 respectively, both units began burning 30% petroleum coke in April 2005.

Looking forward from 2004, the first of the two long-term coal contracts was set for a market reopener in December 2005. Because the low heating value of this coal challenged the fuel delivery system, a substantial increase in fuel cost was anticipated beyond 2005. Unfortunately, to avoid or mitigate this expected fuel cost increase would require SJRPP to burn a lower-grade coal than the coal that had previously defined its lower limit of coal quality of 11,800 Btu/lb.

The coal supplier suggested a lower-grade coal averaging 11,300 Btu/lb at a substantial discount. After evaluating the statistical variance in the coal’s heat content, it was determined that a 7% increase in mill coal throughput would be required. Without this increase the substitute coal would not be viable.

The OEM mills are vertical spindle mills with three static rotating grinding rollers and a rotary grinding zone. They were designed to be low-speed, high-volume mills with a design capacity of 103.8 Klb/hr at 70% fineness passing 200 mesh while grinding a 48 HGI (Hardgrove Grindibility Index) coal. However, the mills had never performed at this level, and a base capacity of 89.5 Klb/hr (70% through 200 mesh, 48 HGI) for the mills was established. The base capacity and standard correction curves have historically been used for screening candidate fuels.

The OEM mills had originally been furnished with stationary air ports. To reduce maintenance costs, the stationary air ports were replaced by aftermarket rotating air ports, which resulted in no effect on mill capacity. Classifiers of the OEM mills were designed to be externally adjustable. Unfortunately, since start-up of the unit, the mechanism proved inoperable, and a mill shutdown was required to adjust it.

The OEM discharge rings and classifier reject chutes were original. On the other hand, the grinding ring segments were OEM castings, and the grinding rollers used aftermarket welded overlay material. In addition, the vertical spindle had been modified. Although the aftermarket modifications were successful in reducing maintenance costs, they had no effect on mill capacity. Mill capacity remained the obstacle to burning less-expensive lower-rank fuels.

The problem revealed during the SAS evaluation was restricted capacity due to air port and classifier limitations. The main constraint to reducing fuel costs was mill capacity. Operating above its maximum capacity, the mill differential and motor amps would gradually increase. Likewise, when the feed rate exceeded the mill’s capacity to grind the fuel, the amount of fuel remaining within the mill increased. In addition, the mill table differential pressure fluctuated as the mass of fuel exiting the mill cycled. When this occurred, it often required operators to keep the mill’s feeder and air control in manual mode. 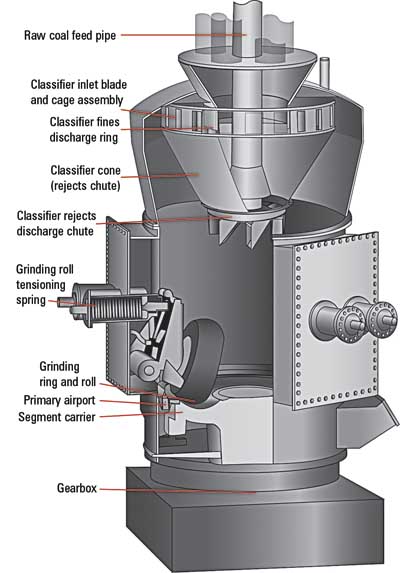 This resulted in reduced fineness, poor flame quality, high carbon monoxide production, high LOI, and unburned carbon in the ash. To rectify the problem required removing the mill from service. The problem was further exacerbated by wet fuel conditions as the elevated primary air temperature would cake or char the contents of the classifier into a solid mass.

In the spring of 2004, SAS built and SJRPP installed a prototypical rotating air port in the 1B mill. This mill was selected as the prototype because it had a history of being the worst of the 14 mills in regard to mill bowl differential pressure and surging. Historically, the 1B mill had the lowest fuel loading and, as a result, it required the remaining mills to make up for its deficiency.

Upon completion of the air port installation, results were immediately observed as the operators increased the participation of the 1B mill. The effectiveness of the new rotating air port to reduce classifier duty through primary classification resulted in additional capacity from the mill. Based on this success, it was determined to prototype an additional mill with all the features SAS had recommended.

The air directional vanes of the rotating air port (Figure 2) face the direction of the grinding table’s rotation at a precise angle. Combined with the throat annulus area, they vector the air port velocity at approximately 10,200 ft/min. The vanes are adjustable to accommodate fuel and/or operating changes. 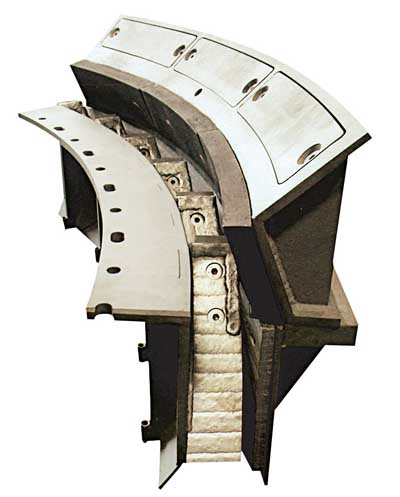 Through the rotation of the air port with the grinding table, the primary air circulates circumferentially and helps to efficiently dry the fuel. The cantilever design of the vanes allows the radial seal to utilize the total air port area. Deflectors, immediately above the vanes, move the coal/air mixture toward the mill’s center. This provides primary classification of the coal and larger particle sizes of coal back onto the grinding segments. The reduction in classifier turndown with this design has contributed to an increase in the mill’s grinding capacity.

A high-spin static classifier blade, cage, and adjustable cycling mechanism (Figure 3) replaced the OEM’s cage assembly. With this design the blades are 180 degrees from the OEM arrangement. In operation they cycle around a pivot point for blade adjustment to the discharge ring tangent. There is a downward deflection in the blade form, and the blades extend downward below the classifier cone top. As a result, it takes advantage of the rotational forces imparted on the dense phase flow within the mill at the primary air porting elevation. 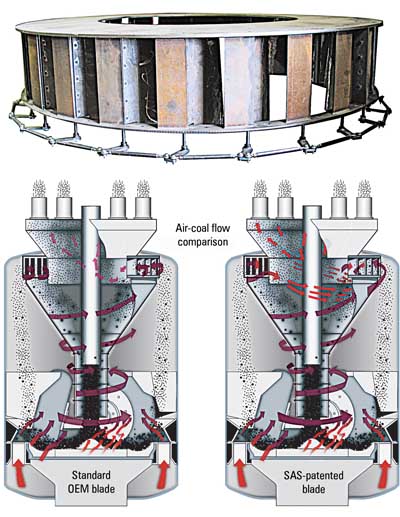 The conical form, depth, and direction of the blade accelerates the circumferential movement of the dense phase flow around the classifier cone, which acts as a cyclone separator. Centrifugal force controls the fineness level, and the blades can be easily rotated from the mill’s exterior.

Utilizing stainless steel gimball bushings, turnbuckles, and pivot arms, the original adjustment mechanism was completely redesigned. However, the original actuation gearbox and connecting arm were reused. This device provides control of the 200 mesh fineness, and through the elimination of restrictions it aids in lowering system resistance. The classifier cone was also replaced. To facilitate any future maintenance requirements, the new classifier cone was constructed in three segments. 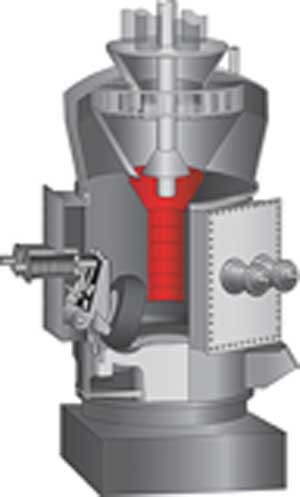 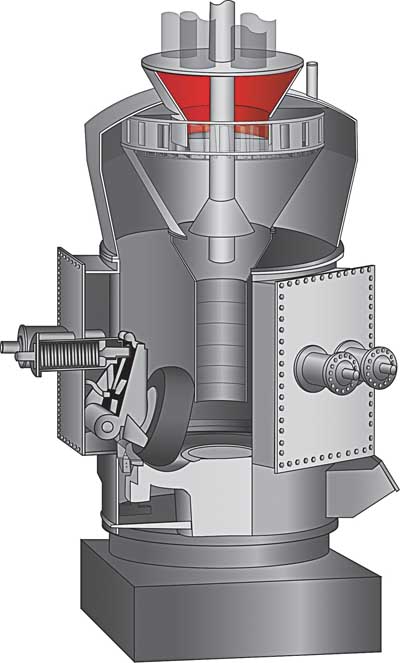 Any oversized coal particles are returned by the classifier back into the grinding zone, approximately 32 inches above the table. By eliminating the discharge doors and returning the fuel directly into the grinding zone, the mill’s differential is reduced, fineness is improved, and plugging or "surging" is eliminated. Additionally, the service life of the classifier components has been extended.

The multi-outlet diffuser (Figure 5) creates a homogenous mixture of fuel and air in the turret section of the mill. As a result, it allows a balanced fuel flow through each of the coal pipes exiting the mill. In addition, stimulation of flow characteristics enhances particle size distribution, dense phase flow mixing, and coal pipe fuel distribution. Fuel distribution is critical to the effective reduction of NO X and LOI.

Due to its grinding surfaces having been restored in August 2004, the 2G mill was selected to receive the complete upgrade. Baseline testing was performed in September 2004. After a brief delay due to the active hurricane season, the upgrade was completed in October 2004 and the mill was retested in November 2004.

For these tests, mill output was slowly raised until its maximum capacity was established. Because of increasing mill bowl differential pressure, additional fuel input beyond this point was not possible, as it prohibited steady state operation. All tests were performed with lower-grade coal.

The baseline testing in September 2004 with restored grinding surfaces, and prior to the upgrade, established the mill’s baseline capacity of 90.2 Klb/hr when corrected to standard fineness of 70% through 200 mesh. These test conditions are presented in Table 1; mill capacity corrected to standard fineness is shown in Figure 6. The results fared favorably with the previously established base capacity of 89.5 Klb/hr that had been the historic basis for fuel procurement. 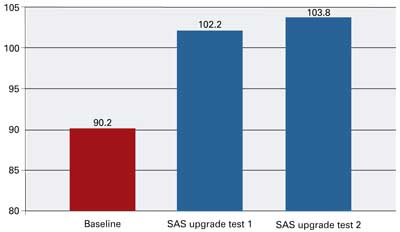 After completing the upgrade in October 2004, the mill was returned to service and retested in November 2004. At the onset of the retesting, it became immediately apparent that the mill’s new capacity exceeded the 100 Klb/hr capacity of the coal feeder. As a result, the feeders were reconfigured and testing resumed.

Because this was the first test performed since the upgrade, the mill’s fineness was unknown. With the classifier in a neutral position, no problems were noted with flame stability, CO, or LOI.

Following the first test, the classifier was adjusted to produce a finer product. Adjustments were made with the mill in service. During these adjustments, the mill motor amps, feeder speed, and differential pressure were monitored to ensure the desired classifier position.

In April 2005, SJRPP placed an order to upgrade the remaining fleet of 13 mills and an aggressive schedule was developed for implementation. As a result, it has allowed SJRPP to negotiate substituting the lower-grade coal for the remaining 2005 contractual quantity of higher-grade coal. Because of this, SJRPP was able to save over $2.5 million for fuel in 2005. In January 2005, SJRPP received its last shipment of the higher-grade 11,800 Btu/lb coal from this supplier.

Pulverizer (mill) capacity at SJRPP has historically limited the fuel supply to coals at or above 11,800 Btu/lb. However, the pending expiration of long-term coal contracts created the potential for substantial fuel cost increases. With its mill upgrades, the plant has increased the mills’ capacity by 14%. Because of this, SJRPP has expanded its coal market, successfully renegotiated one of its two long-term coal supply contracts, and positioned itself more favorably for future fuel procurement.