The way our lungs separate and capture carbon dioxide from blood could be key to isolating emissions of the greenhouse gas in order to store them safely underground.

Carbozyme, a New Jersey – based company, is developing a synthetic version of the blood enzyme carbonic anhydrase, which constantly converts and reconverts CO2 as part of the respiration process. The company says that if it is successful, the enzyme could capture CO2 from coal burners using one-third less energy than other methods.

In our bodies, carbonic anhydrase essentially works by converting CO2 pumped by cells into the blood into bicarbonate to make it easier to transport it to the lungs. Then, in the lungs, the same enzyme converts the bicarbonate back into carbon dioxide to be exhaled.

According to Carbozyme, carbonic anhydrase works very efficiently, capturing about two pounds of carbon dioxide per day. By mimicking the way it works in lab tests of a system that consists of millions of microscale, porous tubes coated with the synthetic version of the enzyme (Figure 6), researchers at the company say they have demonstrated how to capture and separate CO2 from a wide variety of gas emissions. 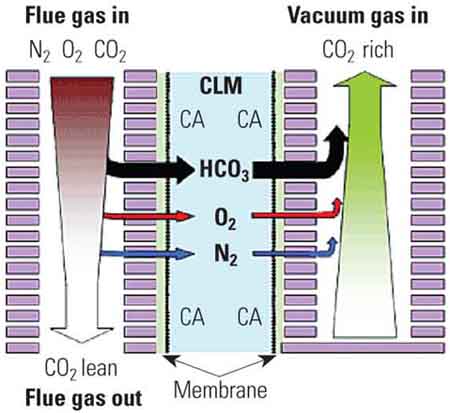 6.     Coursing through the veins. New Jersey–based company Carbozyme is developing a novel biomimetic technology that uses a synthetic version of the blood enzyme carbonic anhydrase to separate and capture carbon dioxide from combustion flue gases. Like carbonic anhydrase’s role in our bodies, the technology separates CO2 from a mixed gas stream as a bicarbonate, whose reaction is catalyzed by the enzyme. The process uses a microfluidic design that features a layer of carbonic anhydrase in a thin liquid film that is contained between two polymer membranes. Courtesy: Carbozyme

The project has received much attention, particularly from the federal government. Carbozyme has to date signed a $4.8 million cooperative agreement with the Energy Department to further develop and scale up the process for capture of CO2 from power plant flue gas. This year, meanwhile, the company will run a pilot project to test the technology on coal burners at the University of North Dakota. If all goes well, Carbozyme could eventually license the technology for use in fossil-fueled plants.