Carbon capture and sequestration (CCS) has thus far been an issue mainly for coal plants as they struggle with the means of complying with impending U.S. Environmental Protection Agency (EPA) carbon pollution regulations. In fact, the EPA suggests that nearly all recently built combined cycle plants would meet the new standard without further emission controls.

Few people, however, expect that to be the case forever, given the EPA’s long practice of lowering emissions limits over time. That means CCS may one day become necessary for gas-fired plants.

Two companies in the gas power business aren’t waiting for the go-ahead from the EPA.

Seattle-based Summit Power Group, which owns 12 simple and combined cycle plants as well as a portfolio of wind and solar generation assets, is teaming up with global technology company The Linde Group to develop commercial-scale natural gas–fired power plants that will be able to capture up to 90% of the CO 2 that would otherwise have been emitted.

“In the U.S. and abroad, the electric power sector is making a ‘dash for gas,’” said Donald Paul Hodel, Summit’s chairman emeritus and former U.S. secretary of energy. “Technology is ready to capture the CO2 that gas-fired power plants produce.”

Both companies are already active in developing power projects with CCS.

Summit is currently developing two major coal gasification projects that will employ CCS. The Texas Clean Energy Project (TCEP), currently under development near Odessa, Texas, will be an integrated gasification combined cycle facility that will supply CO2 for enhanced oil recovery (EOR) as well as urea for the fertilizer market (Figure 1). Summit is partnering with Siemens and Selas Fluid Processing Corp., a Linde Group subsidiary. The 400-MW project, which was selected by the Department of Energy (DOE) in 2009 for a $350 million cost-sharing award, is still completing financing. 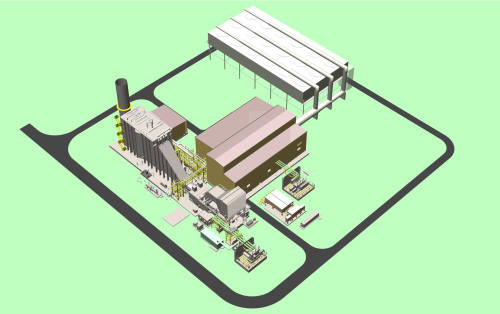 Summit’s other CCS initiative, the Captain Clean Energy Project in the United Kingdom, is in the early planning stages. The facility has been shortlisted for the UK Government’s £1 billion CCS Commercialisation Programme, and the project consortium—Summit, the UK National Grid, and UK oil and gas company Petrofac—is in negotiations with the Department of Energy and Climate Change before a final decision is made in 2013.

Linde is a major worldwide supplier of industrial, process and specialty gases, and gas processing, and has been involved in CCS technology development for a number of years. In 2011, it was awarded a $15 million grant by the DOE for the advancement of CCS technologies. A pilot CCS plant to be built in Wilsonville, Ala., is targeted to be operational by early 2014. The facility will test new CO2 scrubbing solutions to reduce the energy consumption and costs of advanced CCS systems for coal-fired plants. The Wilsonville facility is intended to build on Linde’s experience with a comparable project in Niederaussem, Germany.

Based on their previous cooperation (Linde is the long-term operations and maintenance provider to TCEP), the two companies are now expanding their focus to natural gas–based CO2 capture. The project likely got a boost on March 15, when the Obama administration released its “Blueprint for a Clean and Secure Energy Future,” which included a $25 million prize for the first combined cycle plant to successfully integrate CCS.

“Merely increasing reliance on natural gas is not a sufficient carbon-reduction strategy,” said Dr. Aldo Belloni, a member of Linde’s Executive Board. “It is still necessary, valuable, and eminently feasible to capture and geologically sequester the carbon dioxide that natural gas–fired plants would otherwise emit, just as it is with coal-based plants.”

The initiative envisions a combined cycle plant design with carbon capture producing approximately 250 MW and capturing up to 750,000 tons of CO 2 annually. While power generation for utility use is part of the plan, Summit and Linde are also eyeing the market for CO2 in determining locations for the plant, specifically EOR.

EOR takes advantage of crude oil’s miscibility with CO2, especially deep underground, where CO2 is in a supercritical phase. This reduces the oil’s density, viscosity, and surface tension, allowing more oil to flow out of the well. CO2 that comes to the surface with the produced oil is re-compressed and re-injected, ultimately remaining trapped underground. The DOE estimates project that as much as 240 billion barrels of oil could be produced with next-generation EOR techniques in the U.S., assuming sufficient CO2 is available.

In many U.S. oilfields, the volume of CO2 that would be produced by the Summit-Linde plants could be used to produce an additional 1.5 million to 2.5 million barrels of oil per year. The hopes are that revenue earned from the productive use of captured CO2 will reduce and possibly eliminate the environmental cost premium that CCS imposes.

Summit and Linde have identified several suitable U.S. locations where the electricity could be sold to utilities and large consumers, and suitable geological sequestration sites are available for the injection of CO2 underground.

“Competitively priced electric power is, in the end, a necessity,” said Hodel. “But so is clean and environmentally acceptable electric power. Working with Linde, we believe we can and will be able to achieve both, not just from coal gasification projects but also from gas-fired power plants.”

The companies plan to announce their first project later this year.