CPS Energy (CPS), a wholly owned subsidiary of the City of San Antonio, is the second-largest municipally owned power generator in the U.S. (5,816 MW). Deely 2 is a 440-MW unit burning Powder River Basin coal and was commissioned in 1978. CPS’s commitment to a clean community led to the decision in 2007 to install selective catalytic reduction (SCR) systems on one of three coal-fired units in the CPS fleet. This was the first SCR project for CPS.

As a municipal utility, CPS has procurement practices that focus on fairness and transparency. Bidding was open to all qualified suppliers, and bid evaluation criteria were established before the evaluation. This process has been very successful in preventing inequality and dishonesty, but it is somewhat cumbersome. As a result, CPS gravitates toward minimizing the number of procurement packages, which usually means turnkey (engineering, procurement, construction, or EPC) contracting. CPS also recognizes that this approach means that concept, scope, and quality must all be clearly defined in the specification to avoid expensive change orders. With the contracting approach defined, the project team began planning the project, including writing the project specification.

Planning of the SCR project began with the selection of which of the three units would be upgraded. Sargent & Lundy (S&L) performed a brief study of the advantages and disadvantages of installing SCR on each unit. Deely 2 was selected for three reasons:

It Seems a Shame to Demolish That Steel

The original Deely 2 electrostatic precipitator (ESP) had been recently replaced by a fabric filter baghouse, located adjacent to the old ESP area. The ESP and its support structure were slated for demolition. It was assumed that a new, more robust structure would be built to support the concentrated load of the SCR reactor on the site of the lightweight existing ESP structure. However, S&L had two concerns about this assumption:

CPS asked S&L to do a brief evaluation to determine if it was possible to reuse the existing ESP support steel for the SCR project. Some preliminary concept development revealed that it might be possible, assuming three structural changes were made:

CPS reduced the scope of the demolition. The ESP was removed, but most of the support structure was retained. A sketch of the re-use concept, along with a description of the concept, was included in the EPC specification. The bidders were encouraged to consider using it in their designs (Figure 1). 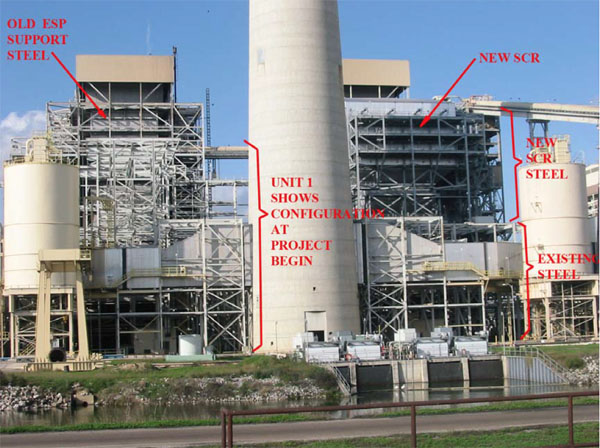 1.     Unit 1 (left) represents how both units appeared at the start of the project. Unit 2 (right) shows the trimming of the ESP steel and the SCR located on top at the conclusion of the project. For the SCR project, the steel used to support the old ESP was demolished down to the level of the bottom of the SCR. New steel, configured to the shape of the SCR, was installed on top of the existing steel structure. Courtesy: Sargent & Lundy LLC/CPS Energy

The SCR reactor receives flue gas directly from the boiler’s economizer outlet and returns it to the inlet of the regenerative air heater. This ductwork is approximately 115 feet above the ground. To minimize the length of expensive ductwork, the SCR reactor is typically supported very high. At Deely 2, the area was surrounded by the recently installed ductwork to and from the new baghouse. The main coal conveyor gallery, rising to the top of the boiler room, also shrouds the area. Cranes were required to lift steel and components over the existing equipment during construction, requiring reaches of 150 feet to 200 feet.

CPS asked S&L to develop means to erect the SCR reactor within the constraints of existing equipment. S&L is a proponent of today’s “big piece” erection concept, as ground assembly is much safer and more economical than assembly more than 100 feet above the ground. However, this area presented challenges to lifting big pieces. The EPC scope included duct sections that might weigh over 35 tons apiece and a diverter damper that weighs 100 tons fully assembled. S&L compared approaches using a large crane versus those using a hoist and rail system. CPS Energy had recently experienced toppling of a crane onto the operating control room, so there was concern about lifting heavy objects over the conveyors serving two units.

There were also concerns about space for contractors. Four major projects—Spruce 2 new construction, Spruce 1 flue gas desulfurization (FGD) upgrade, Deely 1 and 2 FGD retrofit, as well as the Deely 2 SCR retrofit—with significant probability of schedule overlap would be competing for the same space for craft parking, material laydown, and on-site fabrication/assembly. It was assumed that the Spruce 2 project would continue to occupy all the parking/laydown/assembly space it was already using. CPS asked S&L to perform a constructability and laydown study for the other three projects, using only the remaining space on site.

CPS and S&L identified and defined all the available areas on site. Each was documented with a panoramic photograph and a map location. S&L evaluated the space needs for each project, such as traffic patterns and restrictions for each area, start and completion dates, number of craft workers for each project, size of material laydown area, field fabrication and assembly work area required, and the movement of assemblies for installation. A plan was finalized that would accommodate the space needs of all the projects according to their schedules.

CPS gained confidence in the viability of the SCR project from this study. The study was included in the SCR EPC specification, to provide the bidders with guidance on laydown and fabrication planning, as well as lifting approaches. The study allowed the EPC bidders to further refine their EPC proposals.

At the time the Deely 2 SCR project was being developed, CPS Energy’s new 750-MW Spruce Unit 2 was under construction on the adjacent site. The Spruce project team decided to use a 19.5% solution of aqueous ammonia, to avoid public evacuation planning. They also had selected a location for the ammonia unloading and storage facility that was remote from Spruce 2, and downwind of the powerhouse. CPS desired to use the same unloading facility for Deely 2 and to locate the Deely storage tank adjacent to the Spruce tanks. To simplify the system, CPS provided information for the tank, foundation, and unloading piping in the EPC specification for bidder reference.

If the ammonia tank location was remote from Spruce 2, it was very remote from Deely 2. The run for the piping, power cables, and control signals was 3,800 feet long. The run included areas where there were no structures, conveyor spans, and substantial building steel. Where there was a choice of underground or overhead, there were conflicting criteria: Above ground is cheaper and easier for routing the electrical, but buried is safer for ammonia piping, especially where the piping passes near offices. S&L developed a conceptual layout for the entire run for the specification, showing how the piping and cable should be handled for each segment.

Does the Bidder Have a Plan?

The Deely 2 SCR specification was issued for bids in early 2009 and proposals were received in May 2009. The EPC specification defined a well-developed project, and the proposals reflected mature project plans, which included:

As expected, bidders’ responses varied. Of the three finalists, only one adopted the structural steel re-use plan, and that proposal had a substantially lower price than the others. It also had a lower construction risk by avoiding demolition and construction around the cooling water system. With respect to the lifting plan, all the bidders preferred a large crane to the hoist and rails concept. This led to some serious discussions about planning of the large lifts to ensure safety of the crew and security against interruption of the generating units.

The Proof Is in the Pudding

The payoff of the pre-project planning was that the work did go according to plan. The successful EPC contractor was CDPP, a joint venture of Kiewit Power Engineers and Teton Industrial Construction (now part of PCL). CDPP encountered typical surprises, such as the need for more reinforcement of the existing steel than they had planned, as well as a slower-than-expected process for removal of (slightly lead-bearing) paint from the existing steel. In spite of these challenges, the work remained very close to the plan, with few and minor scope changes. Also, CDPP was running substantially ahead of schedule when the unexpected happened, so they never fell behind schedule. It helped that no foundations were needed. Conversely, the plate fabricator was able to shop assemble and deliver complete 12-ft x 52-ft duct segments, saving time and money.

The tie-in outage is a milestone event that was a concern from the beginning. The economizer-to-air heater duct had to be removed and the inlet tie-in and the outlet tie-in had to be installed. And the long duct segments had to be installed in a specific sequence outward from the core. The tie-in would involve very delicate work with very large, heavy pieces. However, CDPP prepared a good lift plan that was practiced with the steelworkers before the actual event. When the time came for the tie-ins, the tie-ins went according to plan. The outage work and tie-ins were completed on schedule.