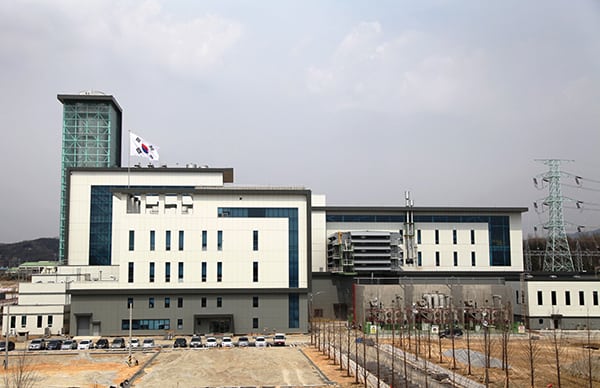 For a country focused on wooing big businesses, constructing large industrial complexes, and building new administration offices, having a reliable electricity supply is vital. But with few natural resources, flexible and efficient generation is imperative.

The plant was constructed in record time—only 24 months—through the teamwork of KOSPO, Siemens AG, and GS Engineering and Construction Corp. (GS E&C). Previous projects of this kind had taken between 30 and 40 months to complete, but improved planning and timing of critical component deliveries made schedule compression possible.

Although South Korea has experienced very rapid economic growth and is currently the eighth-largest trading nation in the world, the country’s natural resources are very limited. Incredibly, 96% of its energy comes from imports, a large portion of which is in the form of oil, coal, and liquefied natural gas (LNG).

South Korea is a member of the Organisation for Economic Cooperation and Development (OECD)—a 34-member group of countries dedicated to global development that includes many of the world’s most advanced countries as well as emerging countries like Mexico, Chile, and Turkey. While the average OECD country has seen electricity generation remain flat over the past five years, South Korea’s electric generation has grown 24%. Its ongoing need for energy is unquestionable.

Like many countries in Asia, South Korea’s energy mix relies heavily on coal, which accounts for about 45% of its electricity generation. However, the country is not blind to the environmental implications of expanding coal usage, and it has indicated that technologies such as integrated gasification combined cycle with carbon capture and storage are a priority. Of course, the added expense of utilizing new technologies reduces coal’s cost benefit when compared to other alternatives.

Nuclear power accounts for a large portion of electricity generation in South Korea too—nearly 30% of the supply—but its future is in question as a result of the Fukushima disaster in Japan, which has people fearing a similar type of accident in South Korea.

The government has ambitious targets for renewable energy, aiming for 12% of all consumption from renewables by 2027. However, with economic growth projected to be the highest of all the OECD nations, South Korea will likely need to expand its LNG usage to meet the growing electricity demand.

Adding to the Mix

The Andong CCPP is located in the city of the same name in the province of Gyeongsangbuk-do. The location is in the midland of South Korea, which presented some unique challenges during construction. The area does not have an industrial zone and therefore was lacking in a skilled labor workforce. Many foreigners may not realize it, but the average winter temperatures in the region are below freezing. During the winter of 2012—while the plant was completing civil and architectural work—temperatures were exceptionally cold, with typical lows of –10C to –15C (14F to 5F). Inland transportation of heavy equipment created logistical issues, and material shipments to the site were also challenging. Navigating these hurdles makes the construction record all the more impressive.

Like many other countries, South Korea has the usual summer and winter peak demand seasons due to hot and cold weather patterns. One of KOSPO’s main considerations when selecting a supplier for the turnkey project was operational flexibility. The plant itself is designed for 250 starts per year with a startup time of only 30 minutes to reach full load. But just as flexibility was important, so was efficiency.

While low natural gas prices have been driving expanded usage in countries like the U.S. and Canada, the price is considerably higher for importers due to the cost of liquefaction, transport, and regasification. South Korea is the world’s second-largest LNG-importing nation behind Japan, so efficient use of the fuel is a top priority to keep the overall cost of electricity down. The fact that the plant has an efficiency of more than 60% is a significant benefit for the Andong CCPP (Table 1).

“We place special emphasis on maximized efficiency, operational flexibility, and environmental friendliness. For that reason we opted for a solution provided by Siemens, which features cutting-edge power plant technology. The plant’s quality and the fast project execution once again proved that Siemens is a very experienced and reliable partner for us,” stated Lee Sang Ho.

The Korea Gas Corp. (KOGAS) handles the importation of LNG for South Korea. It has been getting about 80% of its LNG from the Middle East and Southeast Asia, but that is likely to change soon, in part to ensure energy security, as well as for competitive pricing reasons.

KOGAS is working together with Shell, Mitsubishi Corp., and PetroChina Co. to design, build, and operate the proposed LNG Canada project, planned near Kitimat, British Columbia. KOGAS also has a contract with Cheniere Energy’s Sabine Pass LNG terminal, located along the Sabine Pass River between Texas and Louisiana, to purchase 3.5 million metric tons of LNG annually.

The LNG is shipped to three major terminals along the south and west coasts of South Korea. A main ring pipeline has been installed around the circumference of the country through which the gas can be piped to all of its users. A new terminal is also being constructed on the east coast to contribute a more reliable supply all around South Korea.

The Andong CCPP is designed as a single-shaft power plant. As the consortium leader, with its partner GS E&C, Siemens was not only responsible for erection of the plant, but also supplied the major components, including an SGT6-8000H gas turbine (Figure 1), an SST6-5000 steam turbine, an SGen6-2000H generator, and a Benson heat-recovery steam generator. The SPPA-T3000 instrumentation and control system and other auxiliary systems were also part of the package. In addition, Siemens signed a 10-year maintenance contract for the main components.

“The trustful relationship developed with KOSPO and our partner GS E&C made it possible to execute this power plant in record time to support the high power demand in the Andong area. The project execution also was a benchmark in terms of health and safety, and zero harm in Korea,” said Lothar Balling, executive vice president and head of global project management in the Siemens Energy Power Generation division.

Siemens has three additional CCPPs with H-class gas turbines under construction in South Korea with a total capacity of 2,500 MW, which are scheduled to commence operation over the course of 2014 and 2015. An enhanced sealing system, which minimizes cooling air losses, and an advanced compressor design and coating, contribute favorably to the plants’ efficiency.

“We have already proven that our H-class power plants are very flexible in operation,” said Balling. “This type of plant can be brought up to full load in only 30 minutes, with efficiency levels of over 60% net after six to eight hours’ shutdown—and this with a starting and operational reliability of over 98%.”

With the Andong CCPP as a flagship for its fleet, KOSPO is well on its way to reaching Sang Ho’s ambitious goal of becoming a leading power company on the global stage. ■