Finnish company Wärtsilä has long been a leader in the marine and distributed energy market, supplying combustion engine–based plants for low baseload, peaking, and industrial use. With its new Flexicycle solution, and its latest 18-cylinder 50SG gas-fired engine, however, Wärtsilä has set its sights on the intermediate to baseload market.

Combustion engines have traditionally been favored for decentralized power generation because of their flexibility, ease of use, and low cost. They are especially well suited for situations of rapidly changing demand, as they can be started up and shut down in minutes. They are also useful in areas where total demand is lower but reliability and low maintenance are important, as is the case in many areas of the developing world.

In the past, combustion engine–based generation has not been considered optimal for larger plants that need to operate at high capacity factors, mostly due to the greater efficiencies that a combined cycle gas turbine plant can achieve at full load. However, improvements in engine efficiency and the changing roles of gas turbine–based plants have started to shift this perception. In roles where a plant needs to be able to start, stop, and ramp up and down frequently, a combined cycle combustion engine plant can be more efficient and carry lower operating costs.

Wärtsilä’s newest engine, the 18-cylinder 50SG (Figure 1), aims to be competitive in this sort of intermediate to baseload market. Like previous, smaller models, the 50SG is a four-stroke Otto process spark-ignited gas engine that runs on the lean-burn principle (running with a lean mixture reduces combustion temperature and thus NOx emissions). In this arrangement, gas is mixed with air prior to reaching the inlet valves. During the intake phase, gas is also fed into a small ignition prechamber, where the mixture is rich compared to the gas in the cylinder. At the end of the compression phase, the gas/air mixture in the prechamber is ignited by a spark plug, and the burning gas emerging from prechamber ignites the gas/air mixture in the cylinder. 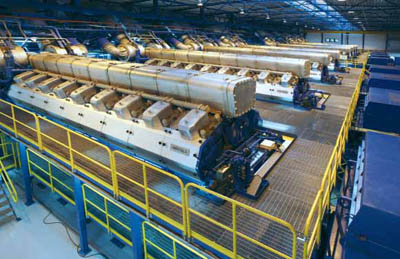 But the 50SG, an evolution of Wärtsilä’s dual-fuel 18-cylinder 50DF engine, is substantially larger than its earlier purely gas-fired brethren. With a 500 mm cylinder bore and a 580 mm piston stroke, a power output of 18.8 MW at 50 Hz and 19.2 MW at 60 Hz, and a better than 48% efficiency, the 50SG is the largest, most powerful, and most efficient gas-fired engine on the market.

The first group of 50SG engines was delivered to the Odas Elektrik Uretim power plant in Urfa, Turkey, as part of an extension to the existing power plant in the fall of 2011. Another Turkish project at Samsun on the Black Sea Coast will receive the engines in 2012.

The 50SG is also at the heart of Wärtsilä’s new Flexicycle plant solution (Figure 2), which arranges the engine in combined cycle with heat recovery steam generators (HRSG) and steam turbines to increase output and efficiency even further. According to Wärtsilä, the Flexicycle solution combines the advantages of a flexible simple cycle plant with the efficiency of a combined cycle plant. In combined cycle, the 50SG can achieve better than 50% efficiency. The dual-fuel 18-cylinder 50DF can also be used in a Flexicycle plant where gas infrastructure is incomplete or unreliable. The 50DF can be run on various qualities of fuel oil and biofuels as well as gas, and can switch fuels on the fly. 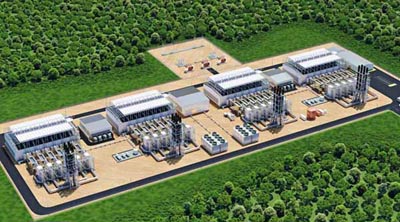 2. Wärtsilä’s Flexicycle plant solution, based on the 18-cylinder 50SG engine, can deliver outputs of up to 500 MW. Courtesy: Wärtsilä

Flexicycle plants can be optimized for different capacities, from 100 MW up to 500 MW, depending on the number of engines in the plant. Each engine is equipped with its own HRSG, all of which feed a common steam turbine with a condenser and can switch between simple cycle and combined cycle mode as needed. Plant cooling is typically arranged so that the engines are cooled with closed-loop radiators, and the steam cycle with cooling towers.

One advantage over a gas turbine–based plant is that the output can be adjusted simply by changing the number of engines in operation, allowing a Flexicycle plant to maintain peak efficiency regardless of total output. In simple cycle, the plant can be brought from cold start to full power in as little as 10 minutes, with combined cycle operation needing 60 minutes to reach full efficiency. The design is modular and scalable, so that generation capacity can be increased simply by adding another bank of engines.