There’s an old, cynical saying along the lines of “Any time you see a roomful of senators agree on something, keep one hand on your wallet.”

Last month, when the Senate Energy and Natural Resources Committee held a hearing on the prospect of liquefied natural gas (LNG) exports, observers were treated to the rare sight (for these times, at least) of an array of Republicans and Democrats largely in agreement on a key issue for the nation. While it remains to be seen if the “sweet spot” for LNG exports will be set by the market or regulation (we at GAS POWER are on record as favoring the former), the group was enthusiastically unanimous in endorsing a growing role for natural gas in the nation’s energy mix.

Meanwhile, in his State of the Union address that night, President Obama followed up similar rhetoric from last year with more cheerleading on natural gas—and to the consternation of some, not a word about coal or nuclear.

U.S. natural gas production is remaining stubbornly high, and the Energy Information Administration (EIA) is projecting flat to modest growth over the next two years. This, despite a better than 40% drop in the gas rig count over the past 12 months.

Major utilities like MidAmerican and Duke Energy are replacing old, inefficient coal plants with new combined cycle gas turbines plants even faster than they expected to. Coal is mired in the doldrums of regulatory uncertainty, while the poster children for nuclear this past month were the crippled Crystal River plant, which Duke formally gave up trying to fix on Feb. 5, and seemly cursed San Onofre, which got more bad news from the Nuclear Regulatory Commission in the form of an apparent thumbs-down on Southern California Edison’s plan to conduct a limited-power restart test this year.

The cause of the enthusiasm can be seen in Figure 1, which charts EIA data for gross production and the average price of gas for electric power since 2008. If you’ve paid the least bit of attention to the gas business over the past few years, nothing here is new: Rising production, falling prices. 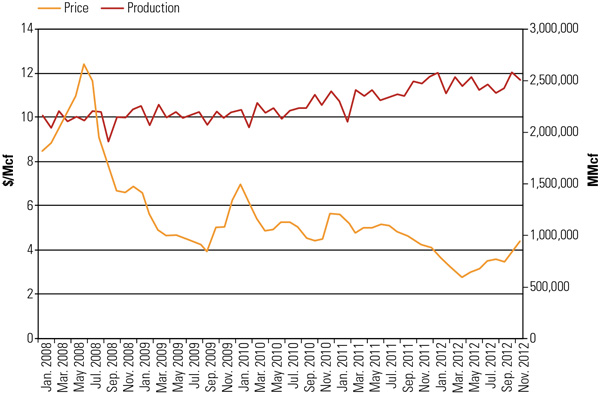 1. Surging supplies have lowered gas prices for electric generators over the past few years. Source: EIA

But a considerably different picture is painted by Figure 2, which extends the data back to 2002. Here, the steady increase in production is still apparent, but the price, not to put too fine a point on it, is all over the map. 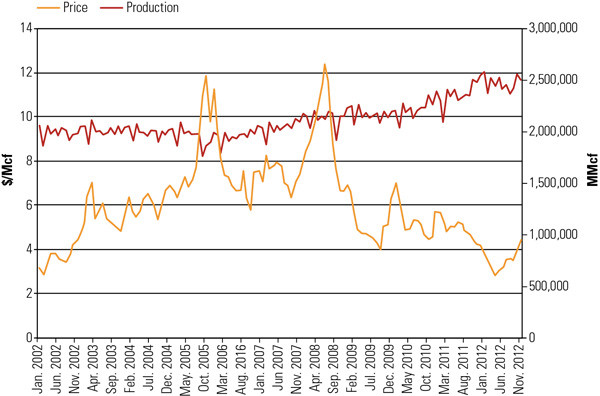 We’ve been here before, of course. As contributor Steve Slocomb explains this month, a similar glut of cheap gas in the late 1990s led to a similar gas power building boom, producing a fleet of plants that went largely unused after the price of gas jumped up in the 2000s. It’s taken a decade, and more moderate prices, to get those plants a meaningful role in the generation mix.

The difference in 2003, when gas prices began spiking upward, was plenty of excess coal and nuclear capacity that could fill the gap those gas plants were intended to occupy.  In 2013, we may be facing a different situation.

Between 2003 and 2011 (the last year for which the EIA has complete data), total net generation increased about 217 GWh. Over that time, the U.S. added 74 GW of net gas capacity but a mere 9 GW of coal and only 2 GW of nuclear (all uprates). Total net generation for coal fell 240 GWh, while gas increased 363 GWh and nuclear was up 9 GWh. (Other resources—mainly wind and hydro—make up the differences here.)

Clearly, gas has taken a big chunk of the generation pie from coal. But much of that coal capacity is not just idled—it’s bowing out of the mix. Since the end of 2011, at least 10 GW has been retired, and depending on whom you listen to, anywhere from 50 GW to 75 GW more is due to retire by 2016. Very little new capacity is expected to replace it—virtually all of the capacity growth through 2035 is expected to be in gas and renewables. So, roughly speaking, we could be looking as little as 275 GW of coal capacity by the end of 2016.

The nation’s nuclear fleet is already running at better than 90% average capacity, and the room for additional uprates is about gone. And the same economic pressures are hitting nuclear as well. In addition to the 860-MW Crystal River plant, Dominion opted to retire the 556-MW Kewaunee plant in Wisconsin later this year. A number of other older plants, such as Entergy’s Vermont Yankee and Exelon’s Clinton plant are also considered ripe for retirement. And this assumes troubled plants like San Onofre and Fort Calhoun in Nebraska—the latter shut down since early 2011—are able to eventually return to service. New plants under construction at Vogtle in Georgia and Summer in South Carolina would replace this lost capacity—but only just.

All of that’s going to tilt the playing field even more heavily toward gas. The EIA projects modest but continued growth in electricity demand in the near future—a bit less than 1% per year—reaching 4.716 TWh in 2035.

So here’s the question few people seem to be asking: What happens if there is another spike in gas prices such as we saw several times in the 2000s? Because despite recent moderate prices and limited fluctuation, the history of gas is one of volatility. And we aren’t leaving ourselves a lot of margin for error.

And even supply shocks are not out of the question. There are experts out there who consider shale gas to be one big Ponzi scheme that is doomed to collapse in a few years as rapid decline rates for shale gas wells start to catch up with production. Most petroleum geologists think they’re wrong, but if they aren’t, the shock to the market could be enormous.

None of these scenarios is necessarily likely, and their possible effects are certainly open to debate. Perhaps we’ll avoid any dangerous gas price spikes—but the direction we’re headed is sure to exacerbate the effect of any price fluctuations we do get. And all of this is, of course, without getting into the array of complex regulatory and  infrastructure challenges standing in the way of greater reliance on gas for power generation.

There’s certainly a lot to be optimistic about in the shift toward gas-fired power. But there are also more than a few land mines in the road on the way there.

At the very least, we can do our best to avoid laying any more of them.