In the late 1990s, a large number of gas turbine combined cycle (GTCC) plants were proposed throughout the country and in New England. About 12 GW of total capacity was built in the ISO-New England service area, which roughly broke down to 2.6 GW in Connecticut, 4.9 GW in Massachusetts, 2.5 GW in Maine, 1.3 GW in New Hampshire, and 900 MW in Rhode Island. Most of these plants were built due to the then-advantageous economics of natural gas and the efficiency of the combined cycle turbines. It was anticipated that gas turbine combined cycle plants would be able to produce power at around $0.021/kWh, compared to about $0.03/kWh for coal. With the low cost of natural gas and much more efficient generation, GTCCs were projected to produce power much more cheaply than the older, inefficient units.

Of course, things did not turn out that way. Spikes in the price of gas during the 2000s rendered most of these plants uneconomic, and the increased natural gas costs eliminated any advantage over conventional facilities. The peak generation costs increased from $0.02/kWh to more than $0.10/kWh. Prices peaked in the fall/winter of 2005–06 and the summer of 2008, normally two peak periods for demand.

As a result, these GTCC plants subsequently operated much less often than anticipated, generally becoming the marginal generation assets (the last plants turned on in the queue). Some GTCCs could not even afford to operate to perform their annual stack tests. Annual average utilizations were in the range of 30% to 50%, when they were anticipated to be in the range of 90%. Worse, capacity factors were in the range of 26% to 37%, so even when they were operating, they weren’t operating at full load. Many of these plants changed hands several times, as the economics did not allow them to be profitable.

But in the past few years, things have changed again. In the mid-2000s, when these plants were having the most economic difficulty, shale gas production began to take off. Production grew from under 1 Tcf in 2005 to about 10 Tcf in 2011. Increased gas supplies have reduced fuel costs for GTCCs and increased their operations. Meanwhile, natural gas prices have also become decoupled from oil: Though historically, natural gas has nearly always trended above oil, since in mid-2009, oil has become much more expensive than gas.

Environmental Protection Agency operational records have been reviewed since 2007 for several gas-, oil-, and coal-fired plants in New England to evaluate the effect of the shale gas boom on operations, efficiency, and emissions. The average utilization and capacity factors for the newest GTCCs rose from a low of 34% and 26%, respectively, in 2001, to 60% and 44% in 2012. The annual NOx emissions increased from around 150 tons in 2001 to more than 500 tons in 2012, a small fraction of what would have been emitted from the same amount of oil- and coal-fired generation. In contrast, the oil- and coal-fired plants saw their operations plummet. As a share of the total generation by kWh for fossil  fuel–fired facilities, these plants went from generating 46% of the region’s electricity to only 12%.

Conventional plants faced challenges beyond cheap gas, however. Among these were an array of new emissions regulations, both state and federal. In addition, beginning in 2008, the Regional Greenhouse Gas Initiative (RGGI) required these plants to purchase allowances—and being dirtier and less efficient than GTCC plants, they were at a competitive disadvantage. The gas advantage becomes even more striking with the recently planned reductions to the available allowances in the RGGI cap from 165 million tons to 91 million tons—a reduction of 45%.

The result was substantial new capital and operating expenses for many existing conventional plants. For example, the Brayton Point Power Station in Somerset, Mass., one of the largest fossil plants in the region, had to invest $530 million in air pollution controls and $570 million in new cooling towers.

The changes in the region’s generation mix can be seen in Figure 1. Overall, the total reductions in New England from 2008 to 2012 were substantial: 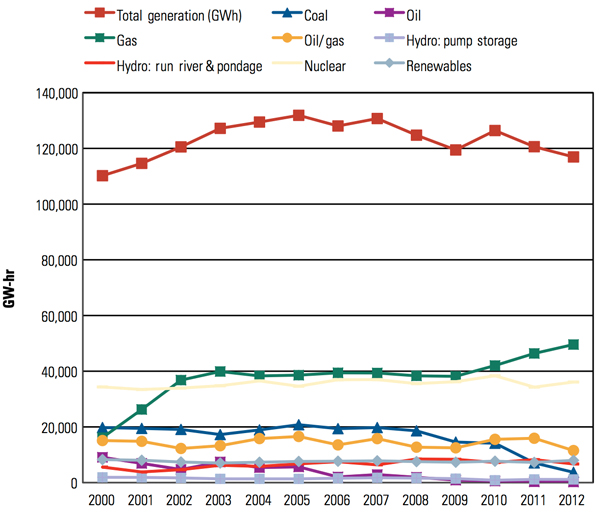 1. The generation mix in the ISO-New England region shows a large growth in gas-fired power from 2000 to 2012, with commensurate drops in coal and fuel oil. Courtesy: ISO-NE

The changes in the natural gas market have generated substantial investments. Many new GTCCs were licensed and constructed and sold repeatedly over the past 10 years. Large investments have been made in pollution control technology for conventional units. Despite these investments, these same conventional units are beginning to be retired because they have been displaced as coal and oil have become more expensive than gas. The same price volatility that handicapped gas-fired power generation in the early 2000s is now making these older plants unprofitable. It remains to be seen if future fuel price fluctuations will change the generation mix, but for now, the region is projecting to continue using cheap gas. Furthermore, the RGGI allowance reductions announced on Feb. 7 lock in the effect of this conversion from coal and oil to natural gas.