The California Energy Commission (CEC) held a workshop on Mar. 7 entitled Costs of Non-Renewable and Fossil Fueled Generation in California. Perhaps a better title—based on the presentation material, anyway—would have been the coming extinction of fossil fuel–fired power stations in the state.

The essence of the story can be told pictorially. Figure 1 projects costs for greenhouse gas (GHG) allowances. Keep in mind California has legislated a statewide GHG cap-and-trade program, with an initial auction held last year. Not to be ignored are the emissions allowances required for other priority pollutants such as NOx and PM10, but they are less significant for gas-fired plants. 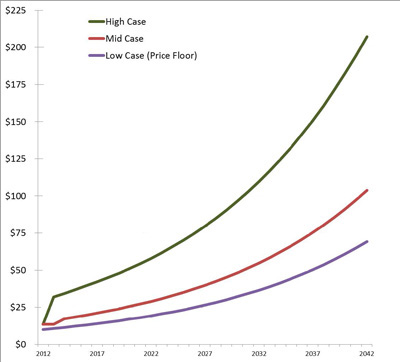 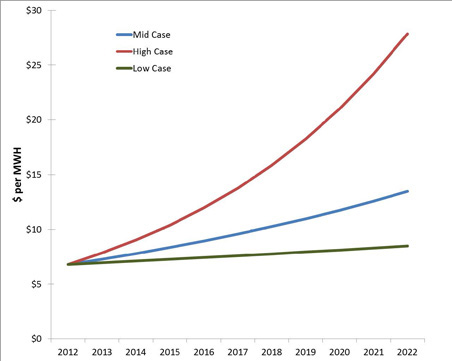 Figure 3 compares cost estimates for a range of electricity generating options, the data on the right being an attempt to narrow the uncertainty bands around the costs. 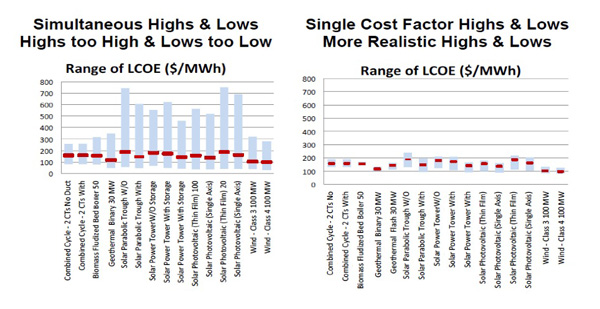 3. Uncertainty bands around forecasted levelized cost of electricity are significant in the graph, left, but are smoothed in the graph, right. In both cases, gas-fired combined cycles are very competitive. Source: California Energy Commission

Gas-fired combined cycle (CC) plants appear reasonably competitive against all the other options. Of note also is that they have smallest uncertainty bands, or the highest predictability—an important attribute for electricity infrastructure economics. Figure 4 shows the average costs and plant performance factors for gas-fired plants in California, based on surveys submitted by 47 simple and combined cycle (non-cogeneration) plants in the state.

Now impose the GHG and wheeling charges onto plant costs, and the CC advantage quickly diminishes. For example, assume a GHG cost of $50/ton, a mid-point of the projections in Figure 1. If you apply the CO2 emissions rate from Figure 4, gas-fired CCs would be saddled with an additional cost of $45 million annually. Correspondingly, if you assume a $10/MWh wheeling charge, tack on another $20 million. Both calculations assume the average capacity factor (CF) shown of 57%. All of the solar and wind options, of course, don’t have GHG charges.

Extrapolating the cost data from Figure 4, an average CC in California spends around $16 million annually in fixed and variable operation and maintenance costs, mostly for fuel, and is paying off a capital investment of over $600 million. How much that costs per year depends on the financing. On the revenue side, at a nominal electricity price of $50/MWh, a 500-MW plant operating at 57% CF outputs around 2.2 million MWh, so it nominally earns around $100 million annually.

These figures are only gross estimates, but the point is that the added costs for GHG and wheeling can quickly overwhelm the plant’s balance sheet. 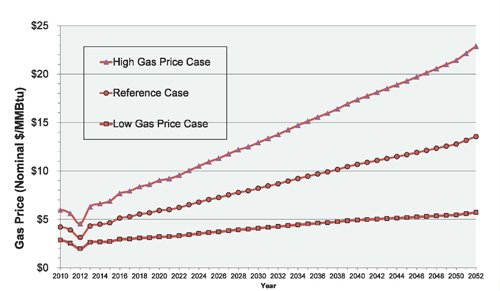 The scenario one has to consider from the CEC workshop data is that, combining even a low to modest increase in natural gas prices, projected GHG costs, and transmission wheeling charges, the days of gas-fired power in the state may be numbered. Large solar and wind facilities presumably would also be subject to wheeling charges. But there is a renewable portfolio standard operating in the state, not a fossil fuel portfolio standard, so renewable energy gets top billing in the queue.

New coal facilities have already been shut out of the state. Imported coal capacity from neighboring states is being replaced with local gas and renewable capacity. The older fuel oil/gas-fired thermal plants are being shuttered because of thermal discharge and other state-driven environmental restrictions. From this workshop material, it appears simple and combined cycle facilities are next, effectively rendering fossil-fueled capacity extinct in the state, or at least relegating it to filling in around intermittent renewable energy and peaking operating hours. Even if gas prices remain low and California sources are developed, the additional cost baggage is considerable.