The Environmental Protection Agency’s (EPA’s) Affordable Clean Energy (ACE) rule is proposed to replace the 2015 Clean Power Plan—which the Supreme Court stayed in February 2016 and never went into effect. According to the EPA, the replacement is necessary because the Obama-era Clean Power Plan “exceeded the EPA’s authority.”

However, like the Clean Power Plan, the ACE Rule proposes to regulate greenhouse gas (GHG) emissions from power plants, and it is founded firmly on the agency’s 2009 Endangerment Finding, in which the EPA determined GHGs endanger public health and welfare. The EPA suggests that if states fully implement the ACE Rule by 2025, U.S. power sector carbon dioxide emissions could be around 34% below 2005 levels. That compares to a 28% decrease compared to 2005 levels recorded at the end of 2017 by the Energy Information Administration (Figure 1). The Clean Power Plan targeted a 32% decrease compared to 2005 levels by 2030. 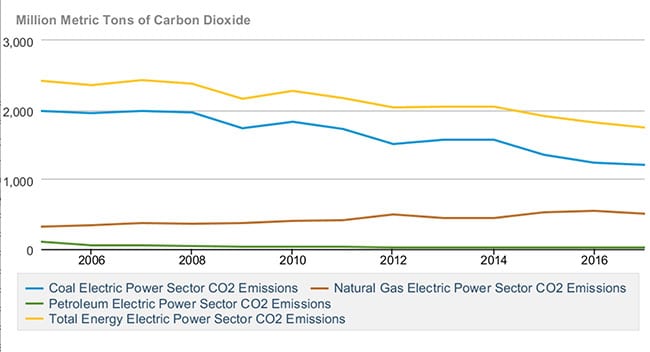 1. Carbon dioxide emissions from energy consumption: electric power sector. Coal-fired generation capacity fell dramatically from 310 GW in 2011 to 260 GW at the end of 2017, according to the Energy Information Administration (EIA). The EIA anticipates another 25 GW to retire by 2020, and a total 65 GW to retire through 2030. Source: EIA

Like the Clean Power Plan, the ACE rule could have several important implications for power generators—specifically at 600 coal-fired units at about 300 facilities. It diverges largely from the 2015 Clean Power Plan in these key aspects:

Emissions guidelines for states. The proposed rule sets “emission guidelines”—formerly known as “standards of performance”—for states to help them develop state implementation plans (SIPs) and submit them to the EPA. The SIPs must establish standards of performance for existing plants. The EPA gives states three years to develop SIPs. The agency would then have 12 months to act on a submitted SIP. If a state fails to submit or complete a plan, or the EPA disapproves a SIP, the EPA would have two years to issue a federal implementation plan.

Heat-rate efficiency improvements are central to the rule. The rule defines the “best system of emission reduction” (BSER) for GHG emissions from existing power plants as on-site, heat-rate efficiency improvements. Comparatively, in the Clean Power Plan, the EPA determined that BSER should be comprised of three building blocks: increasing operational efficiency of coal plants; shifting power generation from coal to natural gas; and increasing power generation from renewables.

The ACE Rule also provides states with “candidate technologies” that could be used to establish standards of performance (see a detailed list below). States will determine which of these technologies are appropriate for each plant and establish a standard of performance that reflects the degree of emission reduction from their application, it noted.

A new preliminary applicability test for NSR. In the ACE Rule, the EPA proposed revisions to the New Source Review (NSR)—a dedicated preconstruction permitting program that requires air pollution permits for “major modifications” at plants—to give states the option to adopt an hourly emissions increase test for projects that could improve plant efficiency. The revisions would mean that only projects that increase a plant’s hourly rate of pollutant emissions would need to undergo a full NSR analysis. The changes are designed to encourage carbon-emitting sources to implement heat-rate improvements without the prospect of triggering major NSR permitting and a protracted permitting process.

As EPA Assistant Administrator for the Office of Air and Radiation Bill Wehrum explained to reporters in a call on August 21: “Right now, to determine whether you trigger the need for an NSR permit, you have to estimate whether there an emissions increase associated with the project. And if there is an emissions increase, then you have [to] prepare that to establish thresholds to decide whether you trigger. So, for instance, if you’re an existing facility in an attainment area, you would have to predict an increase of NOx of greater than 40 tons to trigger the need for a permit for NOx.”  That assessment is currently conducted on an annual basis, Wehrum noted.

“What we propose is to add an additional emissions test that would be used in conjunction with the annual emissions test that would require also an increase in short-term emissions—hourly emissions,” he said. That test is similar to one applied under the agency’s New Source Performance Standard (NSPS) program under Section 111 of the Clean Air Act, the authority under which the ACE Rule would be implemented if finalized. “We believe that proposing the short-term rate-based test aligns the NSR program with the NSPS program, providing a level of consistency that we haven’t had in these programs before,” he said.

The EPA’s proposed “candidate technologies” for BSER solely target heat-rate efficiency improvements, though the agency noted the technologies “may not be available or appropriate for all types” of GHG-emitting sources. The list includes:

Neural networks. A neural network ties into the plant’s distributed control system for data input (process monitoring) and process control. The EPA suggested that the predictive control could be “particularly effective” at improving plant performance and minimizing emissions during periods of rapid load changes.

Boiler feed pumps. These devices are used to pump feedwater into a boiler, but they consume a large amount of auxiliary power used in a plant—of up to 10 MW on a 500-MW plant. Maintenance of these pumps “should be rigorous to ensure both reliability and high-efficiency operation,” and the EPA suggests that the “most pragmatic remedy is to rebuild a boiler feed pump in an overhaul or upgrade.”

Air heater and duct leakage control. An air pre-heater is a device that recovers heat from flue gas to pre-heat incoming combustion air. They must be properly operated, but their performance is often hampered by air leakage from the combustion-air side to the flue-gas side. The EPA calls for “improvements to seals on regenerative air pre-heaters.”

Variable frequency drives (VFDs). Older power plants are designed and built with centrifugal fans, but the EPA says VFDs are the “most precise and energy-efficient method” of flue-gas flow control. VFDs, sometimes known as variable-speed drives on fans, control fan speed electrically by using a thyristor to control frequency and voltage. This is helpful especially to units which, under market conditions, may no longer operate at baseload capacity. “Because plants today usually use either new booster [induced draft (ID)] fans or new ID fans, the option of investing in VFDs generally appeals to plant operators since they are incurring long outages to install the either new or additional air emission controls equipment.” VFDs could also be used on boiler feed pumps, which is “becoming more common in the industry for larger units.” With advancements in low-pressure steam turbines, a motor-driven feed pump can improve the thermal performance of a system up to the 600-MW range, compared to performance with use of turbine-driven pumps. Smaller and older units may not upgrade to a VFD boiler feed pump drive due to high capital costs, the EPA noted.

Redesigning or replacing economizers. Economizers are heat exchange devices used to capture waste heat from boiler flue gas. The waste heat is then used to heat boiler feedwater, improving the overall efficiency or heat rate of a unit. But while the performance of economizers degrades with time and use, power generators have generally delayed or avoided economizer replacements owing to concerns about triggering NSR requirements, the EPA noted. However, some generators have moved to replace economizers with a retrofit installation of selective catalytic reduction (SCR) systems, it said.

According to the EPA, the net costs of heat-rate improvements associated with reducing carbon emissions “can be relatively low depending upon each [generating unit’s] individual circumstances.” The EPA reasoned that efficiency improvements will reduce the amount of fuel consumed per unit of electricity output—noting that fuel costs can account for as much as 70% of power production costs.

In the ACE Rule, the agency provides a table (Figure 2), citing a 2009 Sargent and Lundy report, whose cost figures are updated to 2016 dollars.

The EPA noted that its “candidate list” was compiled having considered other opportunities for emissions reductions. Some considerations just didn’t pass muster include:

Improvements at natural gas units. The EPA said it looked at potential reductions at natural gas–fired stationary combustion turbines as part of BSER—at both simple cycle turbines and combined cycle turbines—but concluded “that the available emission reductions would likely be expensive or would likely provide only small overall reductions relative to those that were predicted through application of other systems of emission reduction identified in the [Clean Power Plan] building blocks.”

Carbon capture and storage (CCS). The EPA previously determined that CCS or partial CCS should not be part of BSER for existing coal units because it was “significantly more expensive than alternative options for reducing emissions and may not be a viable option for many individual facilities.” For gas units, CCS is “exorbitantly expensive, has not been adequately demonstrated, and would not be available for a large number of existing sources.” It added, however, that similar technologies—such as use of the novel Allam cycle—are, while seemingly promising, still in the early demonstration phase.

Fuel co-firing. Co-firing of alternative fuels, including biomass or natural gas, in coal-fired boilers could not be part of BSER “due to cost and feasibility considerations,” the EPA said. “Although some fuel co-firing methods are technically feasible for some affected sources, there are factors and considerations that prevent its inclusion as BSER.” In general, fuel use opportunities are dependent upon many regional considerations and characteristics (such asaccess to biomass, or natural gas pipeline infrastructure limitations), that prevent its adoption as BSER on a national level (whereas nearly all sources can or have implemented some form of heat-rate improvement measures), the EPA said. As notably, it said that “co-firing natural gas in coal-fired utility boilers is not the best, most efficient use of natural gas and, as noted above, can lead to inefficient operation of utility boilers.”

Even so, in the ACE Rule, the EPA proposed that co-firing methods be allowed as compliance options that states may consider, and it solicited comment on whether co-firing should be included in the candidate list.