A recent trend in nuclear power plant upgrades has been the replacement of the motor-generator (MG) sets that drive the reactor circulating pumps with variable-frequency drives (VFD). Siemens’ first application of VFDs in this industry began in 2000 with an installation of six VFDs at the Browns Ferry Nuclear Plant. The use of the VFD continues to expand, and upgrades were recently completed at several U.S. plants, including the Hatch Nuclear Plant in Georgia.

MG sets were originally used to drive the reactor circulating pumps (Figure 1). Their purpose was to control reactor reactivity by changing pump speed and therefore the rate of fluid flow through a boiling water reactor. Today, pumps retrofitted with VFDs permit much more precise speed control and have the potential for achieving speeds (and fluid flow) above the speed set by the line frequency of 60 Hz. An added benefit is the combination of an AC induction motor powered by a VFD, which results in a much more efficient combination than an MG set. The VFD can provide very slow acceleration rates when low-power operation is required. Because raising pump speeds raises reactor power, plants are very cautious about speed control. 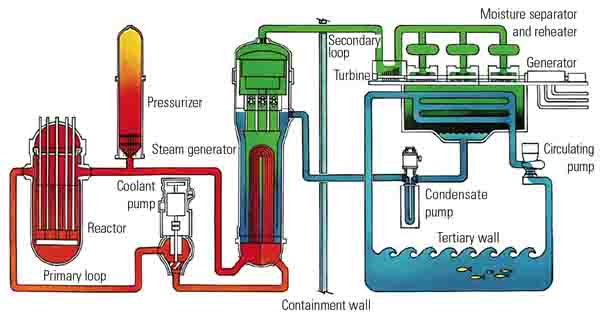 1. Three-ring circus. The tertiary loop of the pressurized water reactor uses a circulating pump to condense the turbine exhaust steam. By using a variable-frequency drive to control the circulating pump, significant reductions in auxiliary power are possible, as well much more precise control of the reactor. Source: Siemens LDA

Replacement of the MG sets addresses the obsolescence and maintenance issues associated with this older technology but also yields several advantages once VFDs are installed and operating.

Typical MG sets are less than 70% efficient compared to the current technology, Siemens’ Perfect Harmony VFDs, which have efficiencies of greater than
95%. In fact, the actual measured efficiencies at full load for eight new VFDs installed in nuclear plants in the U.S. ranged from 95.7% up to 96.6% for various loads and speeds. At full load and full speed (usually 60 Hz), the maximum efficiency of about 96.5% is achieved.

When considering a VFD upgrade, make sure that an integral transformer and input and output filter components are part of the package. Not all suppliers include these components as part of the VFD system; if that is the case, they must be separately added. These components can add anywhere from 0.5% to 1% of additional losses, so a purchaser must also ensure that quoted efficiency includes the losses of all the system components, not just those that are part of the quoted package.

MG sets are usually difficult to control, especially when trying to maintain power production at the maximum allowable level. The Siemens Perfect Harmony VFDs can predictably and accurately control the circulating pump speed to within 1 rpm of the desired speed command. This allows the plant to operate closer to the allowed thermal power limit of the reactor.

Operating closer to the reactor thermal power limit allows the plant to generate additional electricity. The amount of additional energy is plant-dependent but usually results in an extra 1 MW to 4 MW when using VFDs. If a plant can currently operate within 3 MW or 4 MW of the plant’s licensed limit with MG set controls, then typically an extra 1 MW is available when using the Siemens VFD. In some cases, plants can only reliably maintain MG set control within 12 MW to 15 MW of their thermal limit. In those situations, a 4-MW increase can be achieved with the addition of the VFD control. This is a significant cost advantage to a plant, and the return on investment is often as great as the house load reduction from improved VFD efficiencies.

As a safeguard to prevent damage to nuclear fuel and fuel rods, laminar circulating water flow is desired, as well as slow rates of power increase. These rates of increase are diligently enforced by the plant. Achieving these desired slow ramp rates when raising power levels is difficult with MG sets due to their unpredictable control stability. That is, a demand change to an MG set may not result in any speed increase, or the speed increase may be more than what was originally requested. With the precise speed control provided by VFDs, raising power is predicable and power ascension is always within established limits.

The Siemens VFD was specifically designed for high-availability applications that require continued operation in the event of an equipment failure. This particular VFD topology has several layers of redundancy and robustness designed into the system, including N + 2 redundancy for the power converter section, fast cell bypass that will automatically bypass a failed power cell, and redundant control systems that will automatically switch over to a duplicate control system in the event of a primary control system failure. The VFD will continue to run at full power if up to two power modules fail, a primary microprocessor controller fails, or a programmable logic controller controlling the system inputs and outputs fails.

Virtually every major component is redundant, which has given the VFD the ability to operate even after every major system has a component failure. This process (reactor pump) over product (VFD) philosophy improves reliability and leads to fewer power reductions caused by circulation system problems.

Replacing an MG set with a VFD eliminates several other systems in the plant, including the oil used in the mechanical coupling between the motor and generator in the MG set. This results in an environmental improvement, as routine oil disposal is no longer required. In addition, special fire protection systems that are in place to protect against potential oil fires can be eliminated. Additional cost savings associated with eliminating these systems and maintenance processes may be achievable.

Currently, more than 50 individual VFDs are scheduled for incorporation into various nuclear plants, primarily in the U.S., in both boiling water reactors and pressurized water reactors.