Just after midnight on Dec. 22, 2008, a 40-acre pond holding coal combustion waste for a Tennessee Valley Authority (TVA) steam power plant ruptured, sending a wave of wet ash across 300 acres of rural land in Harriman County, Tenn. It was the largest coal slurry spill in U.S. history — more than three times the size of the Martin Country, Ky., sludge spill of 2000, and about eight times that of the 1972 Buffalo Creek flood in West Virginia. Unlike that flood, which killed 125 people and injured scores others, this one, Tennessee authorities reported, resulted in no serious injuries or hospitalizations.

The reservoir was one of three containment areas at the 1,700-MW Kingston Fossil Power Plant, one of several facilities built in 1955 by the largest government-run utility in the nation. On the day of the rupture, the TVA said the pond contained 2.6 million cubic yards of fly ash and bottom ash — amounts well "within guidelines for the area," the TVA said.

Initially, the TVA and the Environmental Protection Agency (EPA) had estimated the spill released 1.7 million cubic yards of coal ash, but in the days ensuing, the official estimate soared to 5.4 million cubic yards — double that said to be contained in the pond (Figure 1). Officials said that heavy rains and freezing temperatures could be to blame for the discrepancy: On that winter night, temperatures for the region had plunged to 14F, and the plant had received an unseasonable total of 6.48 inches that month. 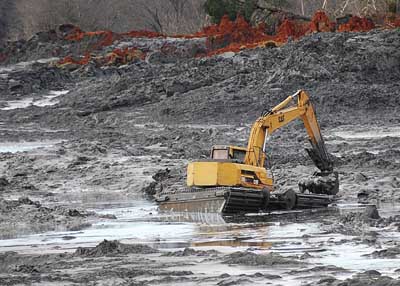 1. Ash Thursday. On Dec. 22, 2008, the earthen retaining wall of an ash pond for the Tennessee Valley Authority’s 1955-built Kingston Fossil Plant failed, spilling 5.4 million cubic yards of fly ash and bottom ash. More than 60 pieces of large equipment, such as the amphibious trackhoe picture here, have been used to remove the ash from roadways and railroad tracks near the Tennessee plant. Source: TVA

Fly ash is the silt-sized residue that is transported from the combustion chamber by exhaust gases and collected by particulate emission control devices before entering the boiler stack; bottom ash is the coarse material taken from the bottom of the boiler furnace in its dry form, or as a slurry. The Kingston plant produces 390,000 dry tons of fly ash and 95,000 tons of bottom ash per year, the TVA said. Both are typically pumped to an ash pond. Once the ash settles in the ash pond, it is pumped to "dredge cells" — engineered and permitted facilities that are surrounded by dikes constructed using compacted ash, and which incorporate engineered drain systems, water runoff controls, and monitoring systems. The water flows into a settling pond.

The authority said it conducted comprehensive inspections of its ash containment areas, including daily visual inspections, quarterly solid waste and dike inspections, and annual detailed inspections of the ash-handling and storage dikes, but no significant problems had suggested that the dikes were unstable and on the brink of failure.

It admitted, however, that leaks were not uncommon findings in the reports. In the preliminary findings of its most recent annual inspection (concluded in October 2008), a "wet spot" was found, indicating a minor leaking issue. And in a prior inspection, which concluded on Dec. 4, 2007, an inspector had recommended that the TVA should "repair any dikes showing signs of erosion on the pond side." More serious breaches had been found in 2003 and 2006. In those years, the TVA reported that the dike at Kingston experienced smaller, localized seepage that released some ash from one of the dredge cells. After each incident, TVA said, it had made changes and repairs to improve the condition of the dike. The utility also noted that these problems were in an area of the dike southwest of the suspected location of the current failure.

In the weeks following, with the toxic nature of fly ash played up, experts were calling the coal ash spill the largest environmental disaster of its kind. The failure to prevent the pond’s rupture also put into question the TVA’s procedures, renewing calls for stricter regulation of ash ponds. There are currently no federal standards governing the disposal of coal combustion waste, how impoundments are designed, or how frequently they should be inspected. Regulation of ash ponds is essentially left to states.

The New York Times suggested that this "lack of uniform regulation" stemmed from the EPA’s "inaction"; that in 2000, it had "backpedaled in the face of an industry campaign that argued that tighter controls would cost $5 billion a year." But, the newspaper warned, an estimated 1,300 similar ash ponds — most with reaches up to 1,500 acres — were scattered around the U.S., and "most of them were unregulated and unmonitored," because of varying state requirements.

The EPA’s management of coal combustion waste is instead focused on recycling fly ash and coal residue — an important aspect, considering that each year, about 43% of fly ash, flue gas desulfurization materials, bottom ash, boiler slag, and other power plant by-products are used beneficially. According to the American Coal Ash Association, of the 70 million tons of fly ash produced each year nationwide, 15 million tons will be used in cement production, for example. Fly ash is also used in geotechnical applications, and it serves as filler in wood and plastic products, paints, and metal castings.