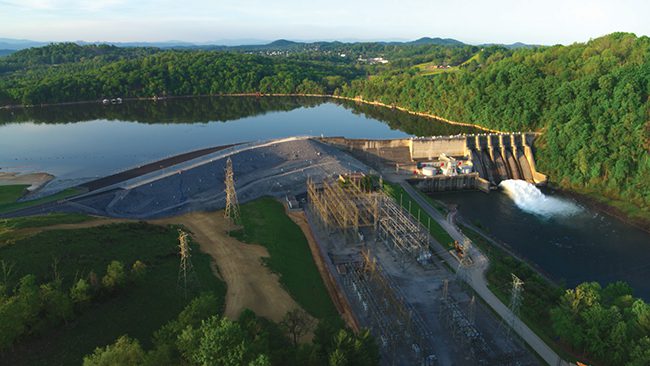 When a sinkhole was discovered near the base of the Boone Dam embankment, the Tennessee Valley Authority’s dam safety engineers went to work determining the best fix. The complexity of the work and quality of the repair make it a worthy POWER Top Plant award winner.

With a name like Tennessee Valley Authority (TVA), most people can easily surmise that the public corporation founded in 1933 serves customers in “The Volunteer State,” but TVA actually has a much broader reach than that. The Tennessee Valley region spans about 80,000 square miles across parts of seven states in the southeastern U.S. Within that region, TVA provides electricity for 153 local power companies serving 10 million people, as well as directly to 57 large industrial customers and federal installations. Beyond that, TVA also provides flood control, navigation and land management for the Tennessee River system, and assists local power companies and regional governments with their economic development efforts. It’s obviously no small mission.

Dams are the tools that TVA uses to manage water and the impact it has across the Tennessee Valley. It operates river dams at 49 sites, 29 of which generate hydropower, and dam safety is a leading priority for the agency. That’s why when a sinkhole was discovered in October 2014 near the base of the Boone Dam embankment, and water and sediment was found seeping from the riverbank below, TVA took the matter very seriously.

A team of TVA dam safety engineers and external experts investigated the source of the observed seepage to determine if dam safety had been compromised. The investigation found that the embankment dam foundation had been impacted by internal erosion, which is when voids develop due to flowing groundwater. Internal erosion is one of the leading causes of dam failures worldwide.

As a result of the finding, a number of interim risk reduction measures were quickly implemented including lowering the pool elevation of the Boone reservoir to between 1,350 ft. and 1,355 ft. (roughly 10 ft. below winter pool levels); assigning onsite inspectors to the dam for continuous surveillance; installing an automated network of sensors to monitor the dam for pressure and temperature changes every 15 minutes and for movement every 30 minutes; exercising an emergency action plan; and constructing a tailrace filter to minimize further deterioration of the dam. Then, TVA’s team of dam engineers and safety experts evaluated methods for repairing the dam.

A thorough decision-making process was employed through which TVA identified a composite seepage barrier as the preferred option to remediate the problem. A composite seepage barrier would create a positive cutoff from the reservoir and could be made from non-erodible material. Therefore, once deployed, the solution would have a very low probability of a seepage connection recurring within the reservoir.

“This project was the single largest dam safety modification project undertaken in the agency’s 89 years of existence, and TVA had never executed a project with similar technical requirements for creating a water barrier through an active dam,” Chris Saucier, TVA’s Project Technical Director, told POWER. “However, TVA has executed sizeable dam safety modification projects in the past decade, and the experiences gained from those projects related to creating highly effective and safe-working teams, which proved invaluable. At the end of the day, the project reinforced my personal belief that our people will always be able to meet the technical needs for a project, and that the greatest challenges are those involving the ways we protect each other and work together to meet the expectations of the citizens TVA serves.”

To plan the job, TVA used other similar projects to develop a benchmark schedule. After the emergency repairs, the first task on the to-do list was an extensive test grouting program. “We began the initial grouting test sections at the toe of the dam in July 2015,” Kevin Holbrook, TVA’s Senior Manager for Construction Projects, told POWER. The BARNARD and Nicholson construction groups were involved in that work. As part of the job, two limited mobility grout (LMG) lines were used for void filling and permeability reductions in soft soil and weathered rock in the epikarst zone.

Meanwhile, several challenges presented themselves on the project, including dealing with the highly weathered rock the dam was originally built on in the 1950s and addressing public concerns over dam safety. Yet, the biggest obstacle revolved around space.

“The most specific challenge related to the completion of the project was around the limited working area of the crest of the dam, which originally consisted of about a 20-foot-wide by 800-foot-long working surface,” said Holbrook. “To overcome this challenge TVA lowered the dam crest by 10 feet, and also constructed upstream and downstream buttresses, which had multiple benefits to the project. One of these being the final constructed work platform that was approximately 120 feet by 800 feet long.”

Holbrook continued: “A great level of project planning and sequencing still had to be orchestrated during construction so that the project could utilize four independent operations that had specific spacing requirements to maintain dam safety at all times. The team utilized production rates from past projects and the test section to develop the detailed sequencing plan that allowed the tight working area to be the most productive while meeting our dam safety and personnel safety requirements.”

A joint venture comprised of Treviicos South Inc. and Nicholson Construction Co. executed the construction of the seepage barrier wall. It included 307 50-foot-diameter secant pile installations from 80 ft. to 180 ft. in depth. “To complete this task, the contractor had to construct onsite infrastructure to include a concrete batch plant, desanding plant, and water treatment plant that supported construction,” explained Holbrook.

During the height of the project (Figure 1), manpower peaked at about 200 workers. This included specialty workers (such as drill rig operators, grout plant operators, and concrete batch plant operators), and local trades and labor. “By utilizing our local building trades through the union, we were able to find qualified workers within the region to support the work,” Holbrook said.

Safety was a top priority for project managers. Holbrook explained that TVA requires all personnel working onsite to complete Occupational Safety and Health Administration (OSHA) “10-hour training,” which gives supervisors and craft personnel a solid safety baseline before starting work. Holbrook also mentioned a long list of additional courses that everyone was required to complete, and even more that were assigned based on job duties.

“TVA and our contractors’ management highly promoted and encouraged safety involvement and awareness, which created much enthusiasm among the craft to participate,” he said. The effort paid off, as the project logged 2,068,530 work hours without a lost time injury.

The COVID-19 pandemic caused some disruption, but the project managed the situation successfully. “TVA’s overriding priority was to ensure the health and safety of everyone supporting the project. Therefore, we took deliberate actions like hosting virtual meetings for workers not directly involved with construction, socially distancing, continuously deep cleaning, and encouraging good hygiene,” Lawanda Hayes, TVA Project Manager, told POWER.

Saucier noted that the project installed more than 300 instruments for monitoring the dam’s safety during construction, and most of the instruments will remain available for future use, providing an ongoing real-time dam health monitoring system. The instruments will supplement TVA’s existing dam safety inspections and monitoring program, which is routinely conducted by a combination of TVA staff from the dam safety, plant power generation, and construction departments. “While TVA’s Dam Safety program is regularly recognized as being among the best in the world, these instruments mark a continuous improvement to our efforts to keep the dams safe for operation,” he said.

The hydrogeneration units at Boone Dam consist of three turbines, which are capable of providing 81 MW of clean energy. Saucier explained that one of the generating units was temporarily shut down during project construction because a temporary dam safety protection feature blocked the discharge tube from that generating unit. When the cutoff wall was finished, the temporary protective measure was cleared from the river channel and the generating unit was restored to operation. While no significant upgrades were made to the unit while it was out of service, the downtime did provide an opportunity to complete regular maintenance activities to ensure safe long-term operation going forward.

The Boone Dam project achieved final completion in May 2022. “In the end, the project did not lose a single production shift due to COVID and was able to finish ahead of the planned schedule,” said Saucier. In fact, the projected finished 17 months earlier than originally expected, and under budget. “TVA went to great lengths negotiating contracts to ensure we were obtaining the best rates and being good stewards of the resources allocated to complete the project,” Hayes said.

In addition to a POWER Top Plant award, the Boone Dam project has won multiple technical awards from international professional societies dedicated to the practice of dam engineering and construction. “Boone Dam is truly a gem, both to us who live in the area and to the world far beyond our borders,” said Saucier.