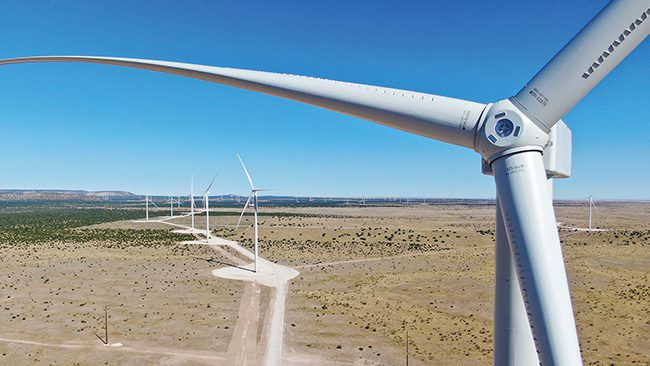 With a capacity of more than 1,050 MW, Western Spirit Wind farm is the largest wind power project ever constructed as a single phase in the Americas. The project, which was completed in roughly a year in spite of the COVID-19 pandemic, is a worthy POWER Top Plant award winner.

The American Clean Power Association, a group that represents wind, solar, transmission, and storage companies and their allied industries, both public and private, reported in its “Clean Power Annual Market Report 2021” that project developers added 35,292 MW of new power capacity to the electric grid in 2021. For the third year in a row, onshore wind led capacity additions, capturing 38% of the market. The 1,051-MW Western Spirit Wind project in New Mexico led the way, having more than twice the capacity of the next-largest project—the 508-MW White Mesa wind farm in Texas. In fact, Pattern Energy, developer and owner of Western Spirit Wind, said the project “represents the most wind power ever constructed as a single phase in the Americas.”

“The Western Spirit Transmission Line literally rewrote the energy landscape in New Mexico—allowing us to build four new utility-scale wind projects in central and eastern New Mexico that make up the largest single-phase wind project in all of North America,” U.S. Sen. Martin Heinrich said at the project’s grand opening in February 2022. “As we build more transformative infrastructure projects like this, New Mexico will grow our ability to export cleanly generated electrons to hungry energy markets in neighboring states, and import thousands of good-paying jobs and billions of dollars of private investment back into our communities.”

The area of New Mexico where Western Spirit Wind is located has one of the strongest wind resources in the U.S. “We’ve been pleased with the wind production at the site. So much so, that we are now looking to build a nearby project, SunZia Wind, that will be three times the size of Western Spirit,” Jeremy Turner, director of New Mexico project development for Pattern told POWER.

Pattern Energy completed financing and started the full construction process of the Western Spirit Transmission Line and Western Spirit Wind project in January 2021. At the height of construction, more than 1,500 people were working on the project (Figure 1). Blattner brought in experienced workers from some of the company’s past projects, and Pattern worked with both Blattner and EC Source to host job fairs in New Mexico. EC Source also worked with the International Brotherhood of Electrical Workers (IBEW) Local 611 in Albuquerque to source electrical workers. Completion of Western Spirit Transmission was announced on Dec. 6, 2021, and completion of Western Spirit Wind was achieved near the end of December 2021.

“We thank our whole team for achieving this amazing accomplishment and completing both projects in one year during a global pandemic. The collaboration of teams of workers around the state shows what can be achieved, building both a 155-mile transmission line and the largest single-phase wind project in U.S. history all in one year,” Turner said.

Western Spirit Wind is projected to provide nearly $3 million per year in new property tax revenues over its first 25 years of operation for the three counties its wind turbines operate in—Guadalupe, Lincoln, and Torrance—and two school districts in the area. Its affiliated transmission line adds approximately $1 million in additional taxes each year on average over 40 years.

“This project is doing it all: creating good-paying jobs, providing clean power to New Mexico and beyond, and cutting emissions from the energy sector,” New Mexico Gov. Michelle Lujan Grisham said at the grand opening.

Tapping some of the best wind in the world, the Western Spirit Wind facility has a powerful generation profile with an evening peak that is a perfect complement to daytime solar, displacing some of the need for ramping fossil fuel–fired generation. “We are proud to have designed this project with input and support from the local communities, environmental organizations, and state government, making this a successful collaborative investment in New Mexico infrastructure,” Turner said.

The project is connected to Pattern’s Operations Control Center in Houston, Texas. This allows remote monitoring and control of the facility, and facilitates coordination with transmission operators and project off-takers.

“This is just the beginning,” Mike Garland, CEO of Pattern Energy, said at the grand opening. “We have committed to $6 billion in upcoming wind energy and related infrastructure projects in New Mexico over the next decade, putting thousands of people to work. Together, we are building a cleaner and more sustainable future.”