Two major U.S. gas power plants will be part of the Department of Energy’s (DOE’s) efforts to develop carbon capture technologies capable of capturing at least 95% of carbon dioxide.

Cane Run 7, which came online in June 2015, was Kentucky’s first natural gas combined cycle (NGCC) generating unit. The facility replaced an iconic coal-fired generating unit built in 1954. The DOE’s funding will furnish a project team led by the Electric Power Research Institute (EPRI) with $5.8 million to complete a FEED study for a project that could retrofit the University of Kentucky’s (UKy’s) solvent-independent low-cost CO2 capture process to the generation unit. “An optimized aqueous amine absorption capture process developed by UKy will be applied to capture approximately 1,700,000 tonnes/year of CO2 at >95% capture rate,” the DOE said.

The FEED study is expected to provide engineering and cost information relevant to retrofitting a carbon capture process on NGCC units. Cane Run 7’s strategic location makes it an ideal representative of power plants in the Midwest and central U.S, “where intermittent renewable power and geographical storage for CO2 is limited,” the DOE said.

TECO’s massive Polk site, meanwhile, “has many features that make it an ideal candidate for applying post-combustion carbon capture, including favorable geology for onsite large-scale CO2 storage,” the DOE said. TECO will lead the project that will receive $5.6 million from the DOE to conduct a FEED study for retrofitting ION Clean Energy Inc.’s post-combustion CO2 capture at the plant.

Since it was established in 2008, Boulder, Colorado-based ION has been developing its third-generation solvent technology ICE-31. It completed a six-month testing campaign of the technology in October 2021 at the National Carbon Capture Center (NCCC) in Wilsonville, Alabama, which was developed in partnership with the DOE’s National Energy Technology Laboratory and Southern Co. The company says it was the first technology developer to test post-combustion CO2 capture from natural gas flue gas at the NCCC’s Pilot Solvent Test Unit (PSTU) using the test facility’s newly configured natural gas-fired infrastructure.

According to the DOE, the Polk FEED study will demonstrate “how a large and critical unit can be equipped with carbon capture and storage to operate within and support a decarbonized electric grid in the future.”

ION, meanwhile, is making headway under another project for a FEED for a carbon capture system that will be retrofitted onto the existing Calpine Delta Energy Center (DEC) in California and capture 95% or more of the CO2 emitted by the plant’s three turbines. The captured CO2 is intended to be stored in the nearby Sacramento Basin.

In tandem, the DOE is supporting a FEED study at the Deer Park Energy Facility, another much-watched Calpine project. Calpine is collaborating with Shell Cansolv on a FEED to integrate a commercial-scale, second-generation carbon capture system at the NGCC co-generation facility in Deer Park, Texas. “This project is set to be one of the world’s largest carbon capture projects and will be designed to capture 95% or more of total CO2 emissions from flue gas generated from all five turbines at Calpine’s Deer Park Energy Center,” Calpine said. “As a combined heat and power generation facility, carbon capture at this facility will enable it to provide low-carbon industrial heat to co-located facilities and low-carbon power to the Texas grid.”

These projects could deliver much-needed technical advancement to the world’s existing and developing gas power projects. As POWER has reported, gas power’s future may be deeply entrenched in its ability to abate its carbon emissions and integrate carbon capture and storage (CCS) or carbon capture, utilization, and storage (CCUS) systems.

POWER’s recent survey of carbon capture projects around the world suggests that more than 30 power generation CCS projects are under construction or in various stages of development. More than a third of these seek to abate emissions from gas generation. (See a larger version of POWER’s August 2022 Big Picture infographic here.) 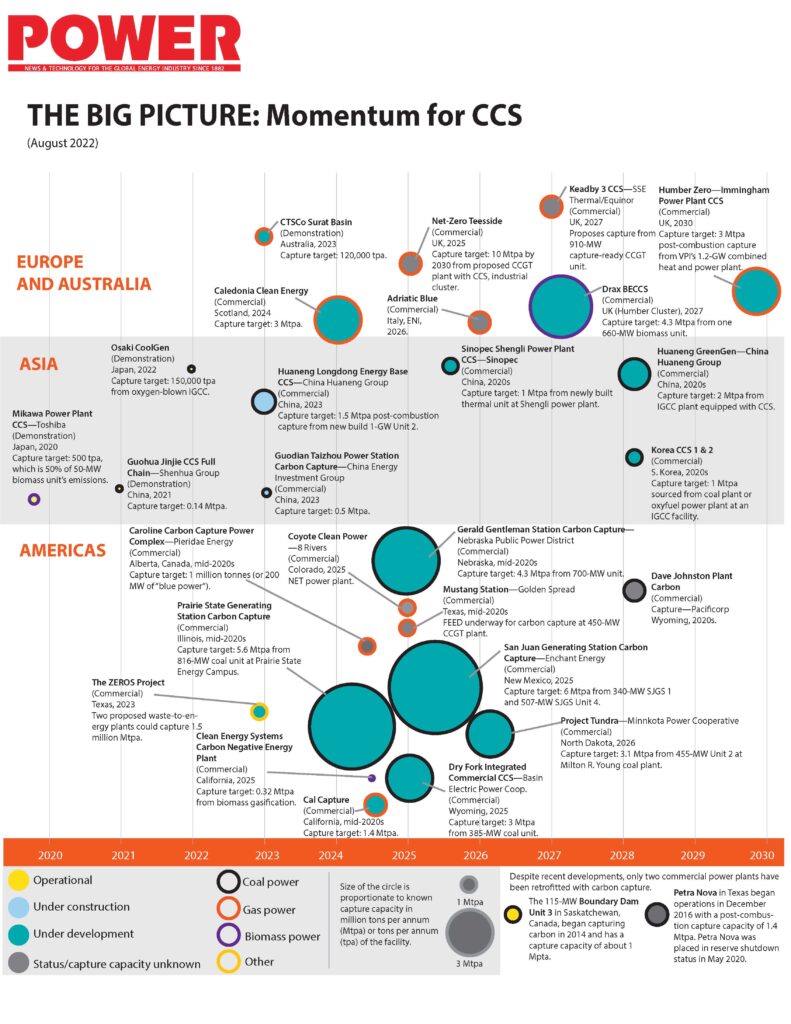 The DOE’s Aug. 26–announced funding will also bolster several technologies that promise advances for NGCC carbon capture. These include the development of a membrane technology capable of capturing ≥97% CO2 from NGCC flue gas by the Gas Technology Institute. “The project will fabricate a nano-confined ionic liquid membrane that demonstrates CO2 permeance as high as 2,400 GPU with a CO2/N2 selectivity of 2,100, which is higher than state-of-the-art membranes in the Robeson plot (concerning materials with high selectivity and low permeability and those with low selectivity high permeability),” the DOE said.

Susteon Inc. will also get $1 million to investigate a CO2 capture solvent specifically designed for capturing >97% of the CO2 from an NGCC power plant’s flue gas. The DOE also separately awarded $1 million to the University of Kentucky to research the chemical mechanisms of post-combustion solvent-based absorption technologies through the design, synthesis, and testing of materials with targeted functionality.