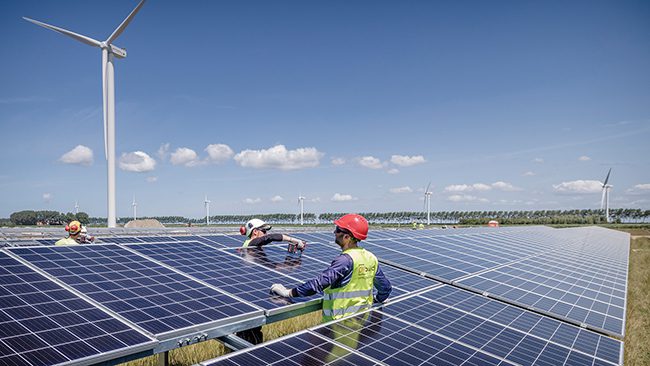 When Swedish company Vattenfall in 2018 set out to combine wind, solar, and battery storage resources at this pioneering energy park in the Netherlands, its foremost focus was to demonstrate a clean energy resource synergy that was economic and reliable. The completed 72-MW project has since become the company’s blueprint for the future.

Goeree-Overflakkee, an island embedded in the Dutch river delta in the southern part of Netherland’s province of Zuid-Holland, has throughout its history grappled with climate stress. Surrounded by various bodies of water—Haringvliet to the north, Volkerak-Randmeer to the east, Grevelingenmeer and Krammer to the south, and the North Sea to the west—the island has over centuries enlarged its land mass through reclamation but struggled to protect it from flooding with dams, dikes, and sluices. Because it is so acutely aware of threats posed by sea rise, Goeree-Overflakkee has aggressively championed climate adaptation in the Netherlands, but it has also led pivotal mitigation efforts in the nation that has long been reliant on fossil fuels for power and heating. More than a decade ago, the region, which is renowned in the Netherlands for its untouched natural landscapes, set out to become a model for sustainability, setting an ambitious target to achieve energy neutrality and self-sufficiency by 2020.

To help the region meet its sustainability goals, Vattenfall in November 2018 announced an investment decision of €26 million for a wind farm north of Goeree-Overflakkee island between Middelharnis and Stad aan ‘t Haringvliet, near Rotterdam. Vattenfall had then notably also recently launched its own sustainability efforts. The company, which is wholly owned by the government of Sweden, was emerging from years of losses associated with rapid changes in European energy markets, and it had recently revised its investment strategy to reflect “a 1.5-degree target” and a “goal of fossil-free living within one generation.”

Vattenfall immediately kicked off the project first by signing contracts with Nordex Group for the supply of six N117 wind turbines with a combined nameplate capacity of 22 MW. It also contracted BAM Infra for the project’s civil works, including to lay cables and pipelines for the wind farm. But in August 2019, it announced another investment of €35 million for an adjoining 38-MW solar photovoltaic (PV) park and a 12-MW large battery installation that would share the same grid connection as the wind turbines.

The decisive effort to develop the Haringvliet Zuid Energy Park as a hybrid project—one of Europe’s largest at the time—was a novelty for Vattenfall, but it was strategic, noted Margit Deimel, Vattenfall director of Sun and Batteries. “Generation, storage and grid connection use the same infrastructure and we can operate more economically thanks to synergy effects,” she said.

Construction at the project initially progressed fluidly, starting first with the installation of the six Nordex wind turbines, which were transported by road at nighttime from Germany. By February 2020, as blades of the first wind turbine were being mounted, the company had begun preparing to install the solar panels. While the wind turbines were ultimately erected within two months, the installation of the project’s 115,000 solar panels across 40 hectares of ground surface (Figure 1) spanned six months.

German solar specialist BELECTRIC, which built and commissioned the solar power system, declared the solar farm complete in April 2021. The firm, which will now provide operation and maintenance of the solar project for two years, noted that the project demanded more vigilance in coordinated planning and construction, as well as for project-specific functionality of its supervisory control and data acquisition (SCADA) system. The team “developed and successfully implemented optimised solutions for monitoring and controlling the solar park, which take into account market price developments, weather forecasts and power grid requirements,” it noted.

Preparations also began in tandem to install the 12-MW energy storage system in 12 sea containers—six containers filled with 288 BMW batteries, and six with auxiliary equipment, such as the inverters and transformers. In addition, the project comprises a battery substation. Dutch grid equipment manufacturer Alfen served as main contractor for the battery system, which was prefabricated and packed in the containers in a factory.

Setbacks: COVID and a Fire

In March 2020, however, the pace of work was abruptly halted as the Dutch government instituted more stringent rules to contain the COVID-19 pandemic. Vattenfall, intent on maintaining safety at the site, cautiously continued building the project with fewer people but longer working shifts.

The project also suffered another key setback in December 2020, when a fire broke out at the wind turbine that was closest to the village of Middelharnis. An investigation later showed that the fire was caused by condensation on the terminals, resulting in flashover. A malfunction in the medium-voltage divider also prevented the error from being corrected quickly enough. Extensive damage required rebuilding the turbine with a new medium-voltage distributor, transformer, converter, nacelle, and mast. However, the blades were reused, Vattenfall said. The repaired turbine was reinstalled in August 2021.

A Blueprint for the Future

Following rigorous checks, the Haringvliet energy park was declared commercially open in March 2022. While the facility is designed to generate 140 GWh of electricity annually, its operation depends on seasonal requirements. “Solar panels produce energy during the day, while wind turbines in our country often produce more at night. Both complement each other during the seasons: wind turbines supply the most electricity in the winter, while solar panels do this in the summer,” Vattenfall said.

“As a result, they can easily use the same grid connection, which means that less power needs to be reserved in the grid and that the connection is used much more often throughout the year,” it added. The battery ensures that the solar and wind net generation remains in balance, the company said. “Depending on the situation, they supply a little extra power to the grid or, on the contrary, they store electricity. A self-developed software system ensures that the various elements work together optimally.”

For Vattenfall, building the hybrid plant has mainly illustrated key efficiency gains related to project development. “The benefits are countless,” it noted. “For example, developing a wind farm can easily take 10 years to prepare. Significant time savings are made by including sun and batteries in the plans from the start. Moreover, building an energy park with the three technologies is cheaper than making three separate projects. After all, they share the same substation, the same cables, maintenance roads, and grid connection, and the ground only has to be opened once.”

But the project’s benefits have extended to consumers, too. “Because the grid connection is used more efficiently, less capacity needs to be reserved on the grid and reinforcement of the grid is limited to one location. An additional advantage is that the scarce technical staff is only deployed once for a grid connection, which means that the energy transition can be accelerated,” the company said.

Another benefit of the hybrid project is that it efficiently makes use of the space. “Such a compact design leaves more space for other functions in the area, such as agriculture and recreation. Moreover, the landscape impact is less,” Vattenfall said.

Vattenfall notably solicited input for the final park design via area workshops with local residents, interest groups, the municipality, province, and the network operator. Haringvliet Zuid Energy Park’s design eventually evolved into a “nature-inclusive” facility. The company said, for example, that it accommodated community requests to allow construction of a bicycle path and a “viewing hill,” and it kept the height of the panels to below 1.5 meters “so that passers-by can see over it.”

Meanwhile, keeping with Goeree-Overflakkee’s scenic and environmentally conscious heritage, the energy park is also designed to accommodate biodiversity and landscape beauty. The edges of the park are sown with reeds and flowery herbs to allow various aquatic animals, reed birds, and insects to thrive there, Vattenfall noted. Open strips within the park are also sown with indigenous herb blends, and Vattenfall has explored allowing local beekeepers to place bee colonies in the energy park. “This would involve organic beekeeping, where the honey is not used for consumption,” it said.

In yet another notable aspect related to the project’s development, Vattenfall banded with other regional wind project developers to establish a “wind fund.” Funded by annual contributions by owners of wind farms built after 2016, the initiative will allow residents and local organizations to use proceeds to support local projects. Vattenfall also confirmed that it pays annual fees to households that are located in the immediate vicinity of the wind farm.

The result has been enthusiastic, Vattenfall says. “Local authorities are very satisfied with the compact design that still yields maximum sustainable energy. The grid operator embraces this project through the efficient use of the joint electricity grid and the smooth integration. Local residents feel involved and are satisfied with the integration into the landscape,” it said. “In short, the advantages of an energy park such as this are so great that in the future, Vattenfall will investigate from the very beginning whether there are opportunities to use multiple technologies side by side. It will be very helpful if local governments also embrace this more in their regional energy strategies.”