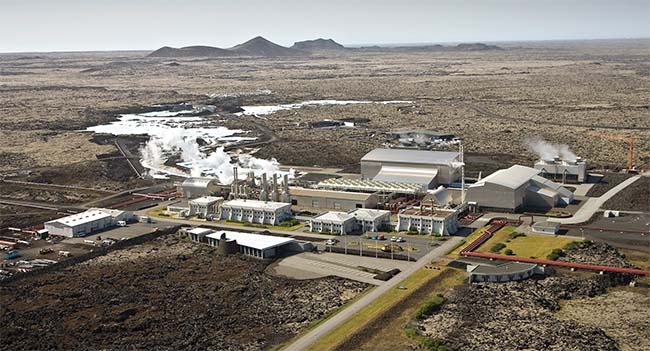 The Svartsengi plant in Iceland has operated for decades, and continues to build its legacy as the facility’s electricity generation and hot water support new businesses and provide a remarkable example of the power of renewable energy.

Power plants are important to local communities, and often serve as the backbone of a regional economy, with homes and businesses relying on the electricity a facility produces.

In Iceland, the country’s geothermal power plants are supporting a national economy, bringing innovation to power production and spawning development of new industries. A prime example is Svartsengi (Figure 1), a geothermal plant that first came online more than 40 years ago and continues to evolve. It provides electricity and hot water, serving as the heating system for the residents of the Reykjanes Peninsula. The Resource Park at Svartsengi includes several companies that use the power station’s resources, including the world-famous Blue Lagoon spa, along with cosmetics manufacturers, biotechnology companies, and aquaculture businesses.

The park also has supported green methanol production, in a process where carbon emissions from the power plant have been captured and turned into green methanol, a low-carbon fuel that can be made from either biomass gasification, or renewable electricity and captured carbon dioxide. Svartsengi’s importance to an entire country, not just its local community, and its status as home to the innovative Resource Park makes the facility a worthy recipient of a POWER Top Plant award for renewable energy.

“Geothermal energy has had a significant impact on Iceland, both economically as well as by contributing to a high quality of life,” said Dagný Jónsdóttir, manager of Resource Park. “During the 20th century, Iceland went from being one of the poorest countries in Europe, dependent on imported coal as an energy source, to now being a country with high living standards and where practically all stationary energy is derived from domestic renewable resources. This reduces the economic exposure to external energy markets.

“For years, Svartsengi has been a model for both other Icelandic geothermal stations as well as being a model for the multi-use of resource streams from the geothermal power generation,” said Jónsdóttir. She told POWER, “Svartsengi’s primary purpose has always been to serve the neighboring communities by supply of critical infrastructure, such as heating, potable water, and stable power supply.”

Jónsdóttir noted that geothermal “is mostly used in space heating and electricity generation, with nine of every 10 households being heated with geothermal energy [the rest is mainly coming from hydropower], It also allows for other amenities such as heated swimming pools all year round and heated sport fields, streets, and parking spaces during the snowy winter. Several industries have also gained a foothold in Iceland because of geothermal energy, for example, some types of land-based fish farming and greenhouses, industries that would not exist here without the geothermal energy source.”

Yngvi Guðmundsson, chief engineer at Svartsengi, said the plant was built in six phases. The first phase, a 50-MW thermal unit, came online in 1977, but has since been decommissioned. Phase II, a 110-MW thermal unit, entered operation in 1980, along with Phase III, which has 6 MW of electricity generation capacity.

“Each phase has had its own purpose and they have mostly been very different,” said Guðmundsson. “The first two phases had the primary purpose of supplying hot water to the neighboring communities, which relied on coal and oil for heating at the time. The third phase was a backpressure steam turbine, which allowed HS Orka [the plant’s operator] to generate power as well. The fourth phase was a result of optimization effort of the resource streams, where less direct steam was required for heating, which in turn could be used in the ORC unit for further electricity generation.

“The fifth phase was a direct expansion of the geothermal reservoir with new wells and a way to meet future demands for hot water as the surrounding communities were growing fast,” said Guðmundsson. “The turbine installed in the fifth phase is a combined heat and power unit, where cooling of the unit serves as pre-heating of water for hot water production. The sixth phase was an optimization stage where the long-term experience gained from utilizing the geothermal resource allowed for further expansion with a new 30-MW unit.”

Guðmundsson told POWER, “HS Orka is currently planning a new rehabilitation and expansion phase, where older units [from Phases III and IV] will be decommissioned, and use of steam and brine further optimized in a new and more efficient turbine.”

Jónsdóttir and Guðmundsson said Svartsengi has been a driver of a strong research and development focus within HS Orka, which has resulted in continuous improvements of the plant and its operations.

“Not only has this resulted in better optimization of the plant but also the creation of the Resource Park, which is an example of the entrepreneurial spirit within HS Orka,” said Jónsdóttir. “Excess resources derive from the power generation and there was demand from companies to utilize these resources, an opportunity to be located next to a power plant and get input in their operations, so our ‘waste’ becomes value for these companies. This is a concept that has been developing for years now and it was a bit ahead of its time, as an example of a circular economy and industrial symbiosis.”

Jónsdóttir said the Svartsengi and Reykjanes geothermal power plants form Iceland’s only Resource Park, but “other companies are also utilizing the resources from their geothermal power plants. ON Power operates a Geothermal Park that utilizes multiple resource streams from Hellisheiði Power Plant, and Landsvirkjun [Iceland’s national power company] is currently utilizing the geothermal resources from their plants in various businesses.”

Resource Park at Svartsengi supports several businesses with its power generation and hot water, including Blue Lagoon, a spa famous in the medical community. The site has offered treatment for psoriasis patients for nearly 30 years, and researchers have confirmed the efficacy of Blue Lagoon’s geothermal seawater for treating the skin disease.

“There’s a lot of interest around what we’re doing from outside Iceland,” said Fannar Jónsson, the quality and environmental manager at Blue Lagoon. “Geothermal energy is much greener, and people are looking at us to help them find solutions for development, for sustainable development. It’s about, ‘How can we utilize this resource as efficiently as possible?’

“It’s great to be part of the Resource Park and to take advantage of the power station for our electricity use and our hot water use,” said Jónsson. “We’re about being carbon neutral when it comes to our operations. We’re able to offset our carbon for flights, for the buses for our employees and guests, we offset [carbon] for our product shipping. Blue Lagoon is a great example of a circular economy.”

Blue Lagoon, in addition to offering its spa treatments, also is known as a wellness company that produces skin care products. “We produce soap, and bath salts, and everything we produce is natural. Our products combine the purity of nature and the powers of science,” said Jónsson, who noted the spa’s products are based on the primary bioactive elements of geothermal seawater—silica, algae, and minerals.

“Svartsengi has been a local leader in implementing the mindset of treating waste as value with its Resource Park,” said Kamma Thordarson, project manager at Green by Iceland, a group supporting Iceland’s renewable energy initiatives. “This is increasingly important as it is necessary to move to a more circular way of using all resources.”

Jónsdóttir, noting Svartsengi’s importance to innovation driving Iceland’s energy sector both now and in the future, told POWER, “Iceland has committed to be carbon neutral no later than 2040 and to be the first nation to be independent from fossil fuels by that time as well.”

Said Thordarson: “Geothermal energy is essential to Iceland’s economy and environmental goals. The mix of geothermal and hydropower in our energy system allows for 100% renewable energy in both house heating and electricity production. As we focus on Iceland’s carbon neutrality by 2040 goal, this energy mix gives us a certain advantage.” An advantage, as Jónsson said, “being studied by the rest of the world.”