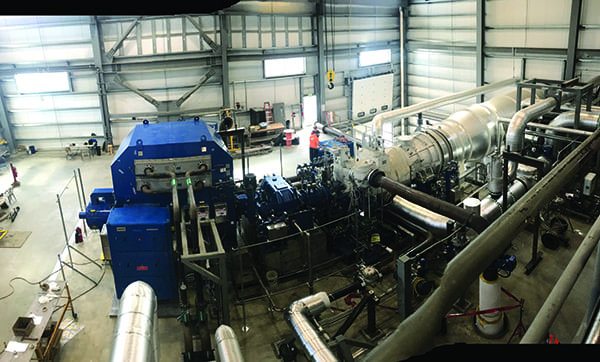 A new coal-fired combined heat and power (CHP) plant at the University of Alaska-Fairbanks, replacing old boilers in place since the 1960s, improves the efficiency of the campus’ heating and cooling system while keeping emissions in check.

Construction of a new coal-fired power plant is a rare occurrence in the U.S. Environmental regulations, which have required installation of expensive emissions control technologies at coal plants that continue to operate, along with economics—driven by an abundant supply of cheaper domestic natural gas and a continuing drop in the cost of renewable power—have meant coal today often takes a back seat to other U.S. generation resources.

But that is not always the case. In Alaska, geography plays a major role in the choice of generation technology. When the University of Alaska-Fairbanks (UAF) began looking at options for replacing two, 50-year-old boilers at the campus, part of the Atkinson Heat and Power Plant that began service in 1964, determining the new source of power was important not only for the campus but also the entire state. 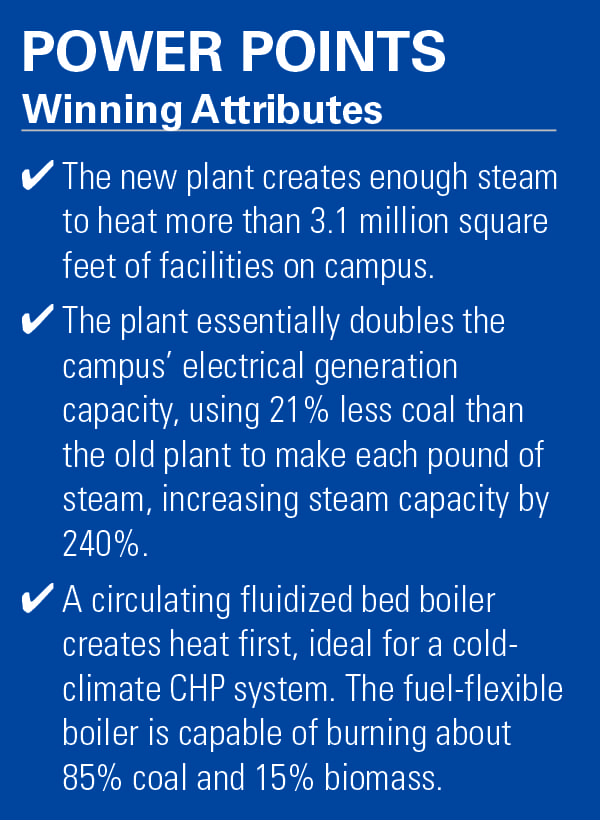 The university has about 10,000 students and receives about $125 million in research funds that support 4,000 jobs. A campus without heat and power, a real possibility as the boilers showed their age, threatened billions of dollars of infrastructure. The campus already had sustained a 12-hour outage due to a boiler failure in 1998.

“We were looking at a situation where we had 50-year-old equipment providing our heat and power for a major institution,” said Mike Ruckhaus, senior project manager for the university, in an interview with POWER. “It was just a huge risk item for our liability, certainly in this climate, if you don’t have reliable heat. The tendency is just to patch it up, but our leadership recognized how important this is and took it on as a mission.”

The result of that mission is a new coal-fired combined heat and power (CHP) plant (Figure 1) with a circulating fluidized bed boiler from Babcock & Wilcox. It’s a $245 million project, built by Anchorage, Alaska-based Haskell Corporation Davis Constructors Joint Venture, that produces 17 MW of electricity, has a total capacity of 240,000 pounds per hour of steam, and includes a steam turbine from Shin Nippon Machinery with controlled extraction ports for providing low-pressure steam to heat the campus. The system also produces chilled water for refrigeration and air conditioning.

“We’re looking at it as a 50-year investment in the university,” Ruckhaus said. “That’s different from most commercial projects. For us, this investment is for a much longer time frame. It’s really the engine for our research and our educational mission.”

“Construction was finished in September 2018,” he said. “This is the largest project done by the University of Alaska,” a statewide system that includes three separately accredited universities on 19 campuses. State government approved the $245 million in funding for the new plant in 2014, a year after failing to support funding for the plant. The project’s principals said the funding approval came just in time, as falling oil prices—Alaska’s economy depends on the oil and gas industry—brought cuts to state budgets, and a delay beyond 2014 would likely have killed the project.

The new CHP plant will retain part of the history of the old plant, as two auxiliary boilers from the old facility—one oil-fired and one compatible with both oil and natural gas—will be kept as backup for the new coal CHP plant.

“A combined heat and power plant is really the most efficient way to deliver total energy to the campus,” Ruckhaus said. “And this campus is a big deal for the community. It’s a gathering place of sorts. For example, in 1967 we had a huge flood in Fairbanks. The campus is on higher ground, and it became a refuge. And we look at it the same way today. If we have a flood, or major earthquake, it becomes more than a university. If the community is having problems, the campus can help.”

The plant sources its coal from the Usibelli Mine, which Ruckhaus said is about 100 miles south of the campus. “We don’t have onsite [coal] storage. We do just-in-time shipments,” he said. “There is storage at the railyard, and we have about 2,000 to 3,000 tons [of coal] in town at any point in time. We pull cars daily up here from the yard.”

A key goal of the CHP project was to ensure that the facility could continue to provide steam and electricity to the campus in the event of a disaster, and buildings and equipment had to be able to functionally withstand seismic events. The soils underneath the facility were porous and sandy, and had to be consolidated down to 50 feet deep before construction began.

Ruckhaus said a natural gas-fueled power plant was considered. But with no available natural gas supply—liquefied natural gas (LNG) is the only gas available in the area, with the nearest natural gas pipeline 400 miles away—buying LNG was estimated to cost at least four times as much as the readily available, locally mined coal. The area’s coal also is low in sulfur and mercury, lessening concerns about emissions.

“That lowest PM2.5 guaranteed for a coal boiler, that’s really a big deal in this community,” Ruckhaus said, referring to the atmospheric particulate matter (PM) that have a diameter of 2.5 micrometers and less, particles so small they can only be detected with an electron microscope. “The pollution here [around Fairbanks] is mostly caused by wood smoke. It’s really good that we’re not contributing to that, and any criticism about this project in that way is really unfounded.”

Fairbanks is a PM2.5 non-attainment area, which means the new plant could not exceed current emissions levels. Under U.S. environmental law, a non-attainment area is an area considered to have air quality worse than the National Ambient Air Quality Standards as defined in the Clean Air Act Amendments of 1970, according to the Environmental Protection Agency. John Solan, senior mechanical engineer with Stanley Consultants in Colorado, which designed the new plant, told POWER the project designers showed that emissions from the new CHP plant would be far lower than those from the old boilers, which helped in the permitting process.

Solan told POWER that the new plant emits just 20% of the nitrogen oxide (NOx) produced by the previous plant. He said plant efficiency is higher, as the boiler takes 21% less coal to make each pound of steam produced. This increase in efficiency, along with the emissions reductions realized through the use of a CFB boiler, allowed the university to increase its steam capacity by 240% while keeping emissions at current levels.

Solan said the plant “has the nation’s lowest PM2.5 emissions guarantee for a coal boiler. It’s the first fluidized bed plant in Alaska.”

“The project was within budget, and we established the budget back in 2012, and we’re still within the budget,” Ruckhaus said. “It’s one of the successes of the project. We used CMGC, the construction management risk contracting method, which promotes collaboration so there are no cost claims on the project.”

The plant is designed to operate in ambient temperatures in a 165-degree range, from –66F to 99F, according to Solan. He said the air-cooled condenser (ACC) controls are designed for sub-arctic conditions, and the system varies air flow over the ACC cells to ensure cells do not stagnate and potentially form ice.

Depending on the time of year, combustion air can be pulled from outside or inside the building. In warm weather, an intake duct takes air from higher in the building, which takes advantage of heat collected in the upper building. It reduces the amount of preheating required before air enters the boiler.

Steam turbines exhaust low-grade heat that normally goes to waste. UAF’s heat recovery system in winter captures exhaust heat from the turbine and transfers it via the chilled water distribution system for preheating the air into the buildings throughout campus. In summer, the surface condenser is removed from service and the chilled water system functions normally.

There were construction challenges. Fairbank’s arctic weather climate complicated scheduling and construction, as steel construction halts when temperatures drop to –15F, and all work halts at temperatures of –30F. To combat the frigid temperatures, the old and new plants were connected via an enclosed pipe bridge that connected critical systems between plants and provided a condition space for personnel to walk through.

“UAF selected Haskell Davis, JV as the CM/GC on the project,” Ruckhaus said. “They were selected early in the project to assist with cost estimating and constructability. The collaboration between UAF, Stanley Consultants, and Haskell Davis JV was key to keeping the project within budget.” ■