Faced with soaring energy prices, researchers and developers worldwide are giving compressed air energy storage (CAES)—a technology almost 50 years old—a dusting, a spit shine, and a new life. In particular, they see it as a critical component for the dispatch of wind and other renewable power.

The technology, which involves storing off-peak-generated energy in the form of compressed air, usually in an underground reservoir, can trace its roots to the early 1960s, when the evaluation of gas turbine technology for power production began. It gained momentum during the next decade because of its promising thermal efficiency and response capabilities for providing load-following and peaking power support.

But since the commissioning of the only two existing CAES plants in the world—the 290-MW Huntorf plant in north Germany in 1978 and the 110-MW Alabama Electric Corp. plant in McIntosh, Ala., in 1991—CAES developments have been rare.

One reason for this is that setting up a CAES facility is pricey and requires finding a geologic formation that can support it. For example, both the German and Alabama plants store compressed air in mined salt caverns

CAES plants work like big batteries. Electric motors drive compressors that compress air (at perhaps 1,100 psi) into an underground geologic formation during off-peak hours. When the electricity is needed most, the precompressed air (essentially replacing the compressor in a traditional combustion turbine) is used in modified combustion turbines to generate electricity (Figure 1). Natural gas or other fossil fuels are still required to run the turbines, but the process is more efficient—using up to 50% less natural gas than standard production, according to Sandia National Laboratories. 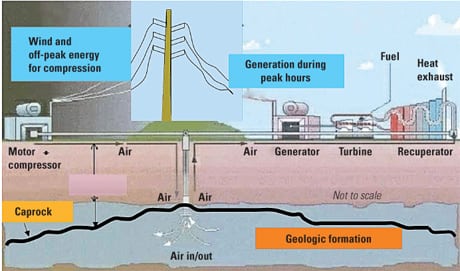 1. CAES in point. An artist’s rendering depicts how energy can be stored during off-peak hours as compressed air in underground geologic formations and be released during peak demand hours. Source: Sandia National Laboratories

Lately, prompted by the staggering growth of wind-powered capacity, CAES is being reviewed for its use as a load management tool as well as its capability to function as a stand-alone intermediate generation source for capturing energy arbitrage, capacity payments, and ancillary services.

In June, Sandia announced that it was developing a stored energy park in an aquifer near Des Moines, Iowa, in collaboration with Public Service Co. of New Mexico (PNM) and more than 100 municipal utilities in Iowa, Minnesota, and the Dakotas. The Iowa Stored Energy Park (ISEP, www.isepa.com) will be a nominal 269-MW CAES plant with about 50 hours’ worth of stored energy. Using Iowa’s abundant wind power, it could account for 20% of the energy used annually at a typical municipal utility and save cities and their utilities as much as $5 million each year in purchased energy, Sandia estimates.

ISEP Project Manager Georgianne Peek said the project, expected to be operational by 2012, was “pretty far along.” By June, ISEP developers were 95% certain that they had the right formation (based on seismic testing at the site), computer modeling, and data from a sister formation. This summer, the team planned to conduct an analysis of the site’s rock mechanics—a study similar to the one they did in 2000 for a 2,700-MW CAES plant proposed by CAES Development Co. for construction in Norton, Ohio. That project is still under development, Sandia said.

Meanwhile, in August, New Jersey’s Public Service Enterprise Group (PSEG) said it had examined CAES for its own use and decided that its potential was great enough to market and develop as a technology that could be embraced by the electricity sector.

The company announced a joint venture between its subsidiary PSEG Global—a sister company of Public Service Electric and Gas—and Dr. Michael Nakhamin, a professional engineer and CAES expert whose credentials include a lead role in the design and technical implementation of the McIntosh, Ala., plant. PSEG will channel $20 million into the joint venture, Energy Storage and Power LLC (ES&P), over three years so ES&P can license an advanced version of CAES technology developed by Nakhamin with lessons learned and operational experience gained from the Alabama plant. ES&P will also optimize the performance of CAES plants and provide technical support throughout the CAES project design, development, and construction process.

According to Nakhamin, when compared to the Alabama plant, this “second-generation” CAES technology has greater scalability and a lower capital cost per megawatt of power storage relative to other power storage technologies. It also has a rapid power response rate, which is critical to enhancing grid stability. Projects could also use more standard components, which would make plants cheaper to build, depending on how much mining is needed to create the underground reservoir.

The time was ripe—technically, environmentally, and economically—for large-scale deployment of the project, said Nakhamin. He added that energy storage was the noticeable missing puzzle piece in plans to set up affordable and reliable electric grids, and his CAES technology had evolved to a point where it could be well-utilized.

“Renewable energy primary harvesting machines would collect the energy in the form of compressed-air, then if the energy available exceeds the demand for electricity at that time, some air is inducted into storage, but the heat is extracted from that and fed into a small fraction of air that is being expanded. This presupposes that your ‘wind farm’ or ‘tidal energy farm’ or ‘wave energy farm’ or integrated mix of all of these is set up to deliver ‘base load’ most of the time,” Garvey told POWER.

At a depth of about 1,970 feet, he calculates that the bags could store some 6,945 MWh of energy for every cubic meter. Garvey’s prototypes are in the process of development and should be ready for testing early next year.

Lately, compressed air has received much attention for its ability to run small engines as well. The Air Car, developed by Luxembourg-based MDI Group founder and former Formula One engineer Guy Nègre, is powered by a compressed air engine (CAE). It uses compressed air to push its pistons when running at speeds under 35 mph. At higher speeds—it can run up to 96 mph—the compressed air is heated by a secondary fuel source (biofuel, gasoline, or diesel) and expands before it enters the engine. The Air Car claims a fuel efficiency of about 100 mpg. The air is compressed using power from a regular electric outlet.

According to MDI Vice President Shiva Vencat, a company licensee, Zero Pollution Motors (http://zeropollutionmotors.us/), is gearing up to launch a six-seater, family version of the compressed air car in the U.S. in 2010 (Figure 2). This car will cost about $18,000. 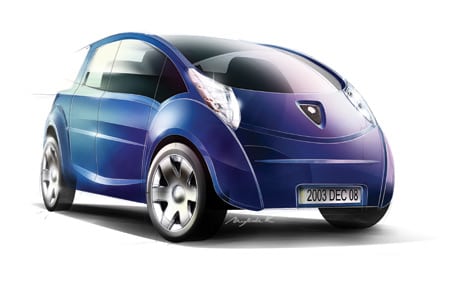 Earlier this year, India’s Tata Motors had claimed it would launch a version of the compressed air car in that country by the year’s end. But in August, Tata told Indian newspapers that the technology of this car is still in nascent stages, and the “launch of cars fitted with such engines…in the near future is ruled out.”