The year 1882 opened on a United States still dependent on the water wheel and steam engine. Power was made where it was used because there was no effective means of transmitting energy past the shortest of distances. But 1882 was to be a year of dramatic changes; the world was just beginning to grasp the implications of a new, incredibly versatile form of energy—electricity.

POWER magazine was launched that year, not too long after introduction of the first practical steam engine by James Watt in England. The steam engine enabled development of industries based on mechanical—rather than human or animal—energy. Soon, just about every manufacturing plant had its own steam-engine power plant. During this paradigm-shifting period, POWER participated in the development of the engines that powered the Industrial Revolution.

From the beginning, POWER had to keep editorial pace with a fast-developing technology and a market strongly influenced by the fantastic economic growth of the post–Civil War period. New products and scientific advances proliferated, and the magazine’s pages reflected the changing world around it. Each issue was packed with drawings and discussions of new inventions and their applications. 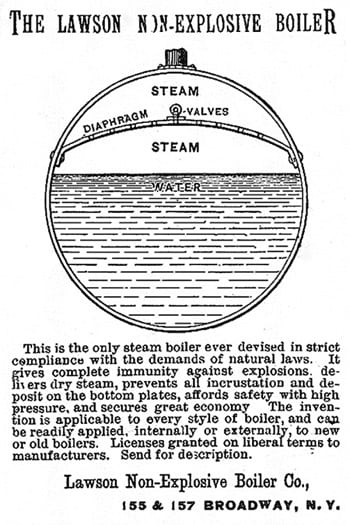 From Pearl Street to Main Street

Thomas Edison pioneered the central station power plant with construction of the Pearl Street Station in lower Manhattan, which supplied its first customers on September 4, 1882. That development foreshadowed the future of the emerging power industry. But before the central station concept’s promise could be fulfilled, many technological barriers had to be overcome.

In addition to these key developments, which might be called the foundations on which today’s electrical systems are built, the past 125 years have seen many other advances. They include the invention and application of new prime movers—first the diesel and then the gas turbine, followed by what is now the ubiquitous combined-cycle plant. Over the decades, POWER covered the addition of each new power-generating source—from water and coal to the atom and, more recently, the wind and sun. While new sources were added, improvements in old ones continued to be made, as with cleaner-burning coal and safer nuclear plants.

As each new advance appeared on the horizon, POWER reported on industry developments, reviewed new equipment offerings, and explained technical details so the business of making power might spread from Pearl Street to Main Street.

In short, POWER and the power industry have been and continue to be inseparable.

One of the major editorial features of the late 1800s was entitled "Boiler Explosions This Month." Without standards and regulations, disasters involving considerable loss of life and property regularly occurred. POWER was a key agent in forming an organization to formulate pressure vessel codes.

As the profession of engineering developed, POWER became more of a practical, problem-solving, plant-operating journal. As the industry became more global, so did the magazine. In this issue, for example, one of our special reports examines Japanese advanced boiling water reactors.

The key themes running throughout the magazine’s history are rapid responsiveness to changes in the market and in reader requirements combined with continuity of editorial and management focus. That vision was first articulated in 1885: "to foster invention, facilitate research, disseminate knowledge, encourage fraternal union, chronicle current progress, as it is affected by the harnessing of nature’s powers to do man’s work; such will be the pleasant mission, the self-imposed and welcome task of our Journal."

We couldn’t have stayed true to that mission without the input from and trust of our readers and advertisers. The accomplishments of POWER in the past 125 years represent the heritage of all power engineers and technology suppliers—a heritage of which we may all be truly proud.

Before it was POWER it was Steam—the publication, that is. Steam’s founder, N. Hawkins, who wrote under the name Theodore Audel, founded the publication in October 1882.

At about the same time, two young advertising salesmen at the Boston Journal of Commerce had an idea for a new magazine. It was to be an offshoot of a column in the Journal that covered the steam plants that were so essential to the area’s textile mills. These two men, Emerson P. Harris and Horace M. Swetland, called their magazine POWER, and in 1883, as they were preparing the first issue, purchased Steam. Early issues of their new publication carried the heading "POWER, with which is incorporated Steam." 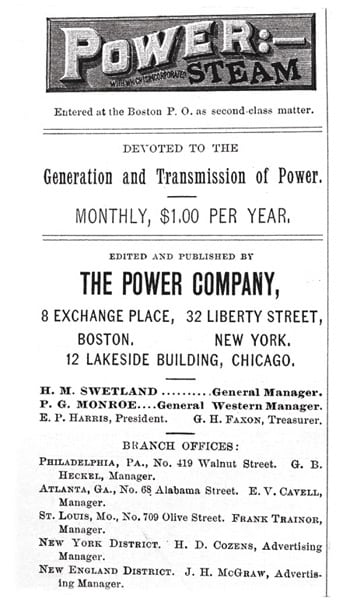 Their company, The American Railway Publishing Co., owned three magazines: POWER, American Journal of Railway Appliances, and Street Railway Journal. An early addition to the staff was James H. McGraw, founder of what would become The McGraw-Hill Companies, who had been a pupil of Swetland’s when he taught school in Panama, New York. McGraw’s name first appeared on the masthead in the September 1885 issue of POWER as "Advertising Manager, New England District."

October 1886 found the young company on Liberty Street in New York City, but debts had piled up until liabilities exceeded assets by a thousand dollars, and the paper supplier was threatening suit. Both partners had used all of the money they could raise. McGraw was sent for in the emergency and was able to borrow a thousand dollars from his old friend James Knapp, a rich farmer from Panama, N.Y., offering no other security than his good name and insurance policy—of which Knapp was made beneficiary. That was McGraw’s first stake in the publishing field.

A series of ownership changes occurred in 1888. By the end of that year, Harris was publishing Street Railway Journal, Swetland led POWER, and McGraw had American Journal of Railway Appliances. In 1889, McGraw laid the foundation for the McGraw Publishing Co. by purchasing Street Railway Journal. For some years, Swetland published POWER as an individual, but in April 1892 he incorporated the Power Publishing Co. and became its president and general manager.

In 1899, McGraw incorporated his publications under The McGraw Publishing Co.; in 1902, John Hill formed The Hill Publishing Co. and purchased POWER. The two men had crossed paths over the years, and their mutual interest in science and technology led to an alliance in 1909. The book departments of the two publishing companies merged to form the McGraw-Hill Book Co. John Hill took the office of president; James McGraw became the company’s vice-president.

The partnership was developing well, but the sudden death of John Hill in 1916 was a blow to the growing company. Business continued despite the loss, with James McGraw taking over as Book Co. president. In 1917 the remaining parts of the companies merged to form the McGraw-Hill Publishing Co., Inc. In 2006, The McGraw-Hill Companies sold POWER and Electrical World magazines to TradeFair Group, where the magazines’ long tradition of in-depth reporting on all aspects of the power industry continues.