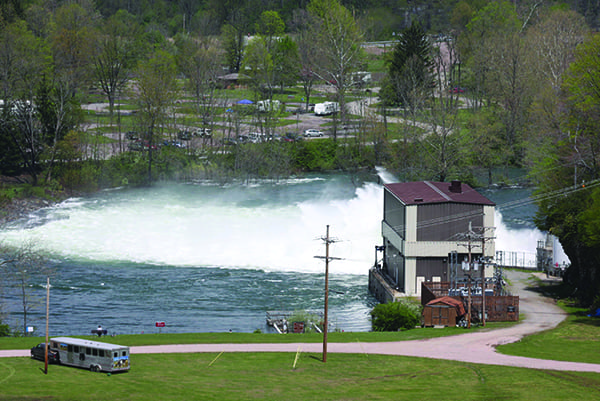 Small hydropower is getting big. Around the world, even as traditional giant projects continue to get built—especially in developing countries—more and more attention is being directed toward the possibilities of smaller systems. The driving forces have been concern about the environmental impacts of huge dams; a shrinking number of suitable sites for major projects, particularly in Europe and North America; and substantial technological advances that have made smaller and smaller sites economic to exploit.

Hydropower in general is experiencing something of a renaissance because of growing demand for renewable energy. The rapid growth of intermittent generation from wind and solar means dispatchable renewable generation from hydro is becoming more valuable. But much of this wind and solar development is taking place in areas—like the central and southwestern U.S. and central Europe—where opportunities for large hydro projects are limited at best. That’s opened up a market opportunity for small systems that can be deployed much more rapidly than larger ones. (For more on the topic, see “Small Hydro, Big Opportunity” in the May 2013 issue, “A New Day for North American Hydropower?” in the October 2014 issue, and “Small Hydropower Advances and Challenges in China” in the January 2015 issue.)

What exactly constitutes “small” hydropower depends on who you ask, but it’s generally considered projects under 30 MW or so. While lots of hydro projects of this size are being built on new sites, not all small hydro plants are new—many are quite old, with some still operating after a century or more. Many of these projects now need substantial upgrades. The good news is that opportunities for improving efficiency and output are large (Figure 1).

According to Voith Hydro’s Jim Glunt, the last decade has seen significant advances in controls, monitoring, and supervisory control and data acquisition technology. Operators are now better able to gather historical and real-time data in order to maximize efficiency or power on demand. Advances in operator control and monitoring have also allowed for more reliable and user-friendly interfaces.

“Typically, a customer who is rebuilding a 50-year-old or older unit can expect around 10% improvement in efficiency. The wear on the rotating components, wicket gate system, and bearing areas can be corrected to add efficiency and reliability,” he said. “Sometimes in dealing with a unit rebuild of this age, there can be misalignment throughout the machine due to the tendency of the power house to move downstream. The slow movement over time is a condition that could cause increased vibration and wear through the years.”

“Generator components can be improved upon in many cases due to newer materials used in the insulating systems. One large reason to improve the generator by rewinding the stator is to eliminate the asbestos that may be present in a unit of such age,” Glunt said. “Given a typical unit of this vintage, customers may want to seriously consider a rewind in order to fend off any potential failure in the winding.”

One benefit to upgrading a small project versus a larger one is that the small size of the equipment means modernized systems can be modular or shop-assembled and delivered to the site in one piece, which substantially reduces construction time and complexity (Figure 2). The newest small hydro technology is also specifically designed to operate at peak efficiency with low heads, which means smaller units can be installed without reducing output or output can be increased without expanding other elements of the plant. Some decades-old small hydro plants have been able to double or triple output (or even more) by upgrading their turbine-generators, gains that are less likely with larger projects. Modern oil-free, permanent magnet turbines are also more environmentally friendly than older technology.

In addition to improvements that are possible from upgrading turbines and generators, one area sometimes overlooked is improvements in controls and automation. Just as operators of fossil plants have begun deploying advanced sensors and data science to improve the operations of their boilers and gas turbines, manufacturers have begun offering similar solutions for their hydro customers. Such systems allow operators to predict possible component failures and determine changes in operations that could extend component life to allow repairs at the most advantageous time. Another factor that advanced data science can help with is predicting output based on changes in local hydrology, an issue of special concern to smaller plants, which are more at the mercy of droughts than large ones (see sidebar).

Such upgrades can reach across the plant. Moving from analog to digital metering and governors and from electro-mechanical to solid-state multifunction protection relays can reap dividends. But an increasing number of small hydro plants are being fully automated.

While this can reduce staffing needs, there are many things that need to be considered from an operations and maintenance standpoint, Bob Baginski of Voith Hydro’s digital solutions team said.

“It’s essential to monitor the mechanical equipment in the plant more closely and have a feedback loop with the remote control systems to detect wrong tendencies early and prevent forced outages. Not only the machines themselves have to be monitored, but also the plant auxiliary systems. For example the status of the dewatering pump and the HVAC system health can be crucial for reliable operation of the whole plant.”

Safety is another issue with full automation, he noted.

“Is it possible to still safely shut down the unit if the main closing device is jammed? What safety devices are in place in case of a cooling water supply pipe rupture? Is automatic closure of valves implemented to prevent the plant from flooding? What is the safe shut down concept in case AC power fails? These things and more have to be taken into consideration.” ■