The City of Lackawanna, located on the shore of Lake Erie just south of Buffalo, New York, was the center of steel production in the region in the early 20th century. Bethlehem Steel’s plant eventually grew to become the fourth-largest plant of its kind in the world. In the second half of the 20th century, the city enjoyed boom years, but they were followed by a slow decline that culminated with the plant closing its doors in the mid-1980s. The remaining “Rust Belt” reminds visitors and residents alike of the environmental costs of steel-making, especially since the area was designated a Superfund site.

A 2002 change in environmental laws gave the city and developers immunity from the costs of remediating the site—costs that had stymied redevelopment of the planned 1,600-acre site for public use under the New York Department of Environmental Conservation Brownfield Cleanup Program. The 30-acre parcel that was selected for a wind project was more steel slag than soil—even though it was on the banks of Lake Erie.

Developing this project on a previously industrial site had two advantages: The old roads could be reused, as could the old power lines to the mill, which are used to push power back into the New York Independent System Operator grid for sale to retail customers.

Construction of Steel Winds began in September 2006, six months after the EPA declared the site clean enough to be removed from its Superfund list. Today, the stark contrast of eight white turbines standing amid the remnants of abandoned factories juxtaposes the area’s past with its hopes for the future (Figure 1). 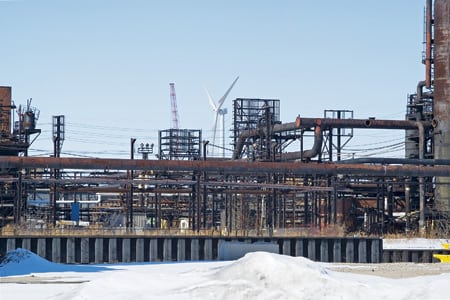 The developer and owner of Steel Winds is the team of UPC Wind (www.upcwind.com) and BQ Energy (www.bqenergy.com). Clipper Windpower (www.clipperwind.com), which manufactured the turbines in Cedar Rapids, Iowa, will continue to provide O&M support for the next five years—a common owner’s requirement with many wind projects.

The $40 million Steel Winds Project was kicked off with a “slag breaking” ceremony in September 2006. The turbines first pushed power to the grid in April of this year; a June 5 commissioning followed.

This project represents the debut commercial application of Clipper’s new 2.5-MW Liberty wind turbines (Figure 2). “We’re delighted to feature some of our first Liberty wind turbines as a part of this milestone wind energy project,” said James G.P. Dehlsen, Clipper’s chairman and CEO at the plant dedication. “Built in America’s heartland, the turbines will be helping to restore beauty and economic development to the local area as they bring new clean, sustainable energy to the people of New York.” 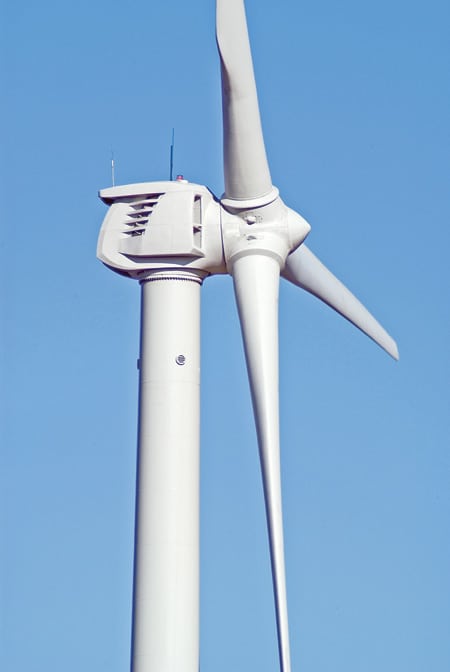 Clipper’s 2.5-MW turbine is now the largest wind turbine built in the U.S. (Figure 3). The Liberty turbines have demonstrated full rated power generation with a wind speed of approximately 25 mph, as designed. This project will sell capacity and renewable energy certificates to Constellation NewEnergy through 2009. 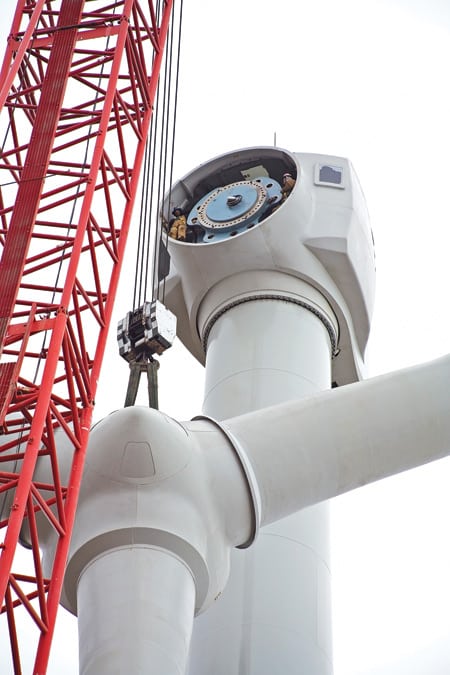 Seldom does a new generation project gain the universal support from the community and city hall that Steel Winds enjoys. From the mayor’s office to local university officials and residents, everyone perceives the project as an environmentally friendly addition to an otherwise unremarkable site. In fact, the city is promoting the area as a tourist destination. “People will come from far and near to look at these, to marvel at them,” Mayor Norman Polanski said.

Locals’ smiles may also be prompted by the additional property tax revenue the city is expecting. The phase one site is configured for a total of 13 turbines, eight of which are now installed and operating. The developers entered into an agreement with the city to pay $100,000 a year for 15 years in lieu of property taxes. However, by state law, renewables projects like Steel Winds are tax exempt unless the municipality has a law that doesn’t allow the tax exemption. The Lackawanna City Council decided such a law was more to their liking and it passed, although not unanimously, in mid-October. This means the last five turbines of phase one and the 13 turbines for a future phase two would be subject to property taxes rather than a negotiated “in lieu of” agreement.

Wind turbine ratings have gone from 700 MW to more than 2 MW over the past decade. As the size of the turbines increases, so do stresses on turbine gearboxes and other driveline components. The applications have a continuously varying load that is difficult to predict, so designs have to be extremely robust to meet developers’ reliability goals. High torque is normally transmitted through a three-stage planetary gearbox in the larger systems. As torque demands have risen, so have the size, and cost, of the ring gears and bearings.

4. Four of a kind. The drive train of the Liberty wind turbine splits the torque among four generators operating in parallel. The turbine can continue to operate with one generator out of service. Courtesy: Clipper Windpower Inc.

The advantages of this arrangement are clear. If one generator goes off-line, the other three continue to operate. In normal wind conditions the drop in output isn’t noticeable; only with high winds will the capacity fall—by 25%. To simplify maintenance, a single 650-kW generator can be removed and lowered to the ground by an onboard crane. Another boon to service: The high-speed gear sets can be replaced without having to remove the gearbox.

The turbine control system incorporates the high-speed microprocessors needed to execute algorithm computations, which are repeated every 50 milliseconds. Unity power factor is maintained down to a low-rated power percentage, reducing the need for volt-ampere-reactive (VAR) correction. Grid integration is achieved through power factor regulation technology with ride-through capability, which exceeds current and planned standards for electric grid operation. The control system can ride through a low-voltage condition for up to 3 seconds. It also reduces loads by anticipating resonant conditions within the drive train structure and generators.

Clipper’s Liberty I prototype began operation at a remote site in Medicine Bow, Wyo., in March 2005 (Figure 5). The site has offered up a wide range of weather conditions, including temperature extremes, high-turbulence wind squalls, lightning, ice, and snow. Together, the elements and limited maintenance infrastructure have both challenged the machine and given the testing team and maintenance crew plenty of lessons to learn, which were used in the design of Steel Winds’ turbines. 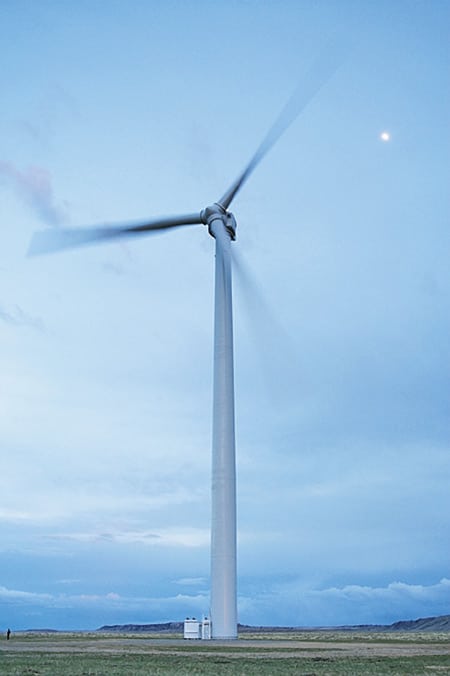 Heading for the big time

Clipper Windpower announced in early October that it has entered the competitive European offshore windpower market and unveiled its plans to develop a 7.5-MW turbine. Such a turbine would surpass Germany’s Enercon 6-MW model, which currently holds the turbine size record. The UK government’s One North East regional development agency is putting up $10 million for the two-year effort, dubbed the “Britannia Project.” The new turbine is described as a scaled-up version of the 2.5-MW Liberty wind turbine, with additional innovations suitable for such a record-size machine.

With approximately 5,500 MW of firm and contingent orders for Clipper’s Liberty 2.5-MW wind turbine through 2011, production is sold out for 2008, and 2009 sales are nearly finalized.