Idaho began tapping its vast geothermal energy supplies as far back as 1892 to supply district heating to its capital city, Boise. A century later Idaho had no operating geothermal plants because readily available inexpensive hydro power resources made new commercial geothermal projects difficult to justify, even if the fuel is essentially free.

U.S. Geothermal Inc. (USG) is close to breaking that long dry spell with commercial operation of the first phase of its new and improved Raft River Geothermal Project. The plant is located in the Raft River region of southern Idaho, approximately 200 miles southeast of Boise (Figure 1). 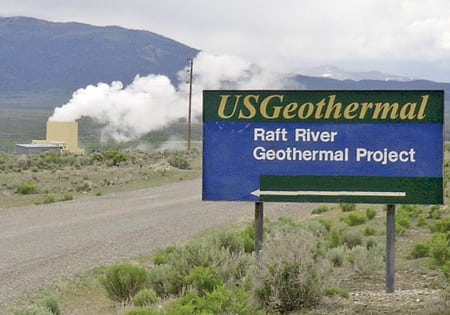 1. Do you know the way? U.S. Geothermal bought the assets of the defunct DOE geothermal demonstration plant in Idaho, renovated the wells, and will have a new 13-MW plant on-line this year. Courtesy: U.S. Geothermal

The Raft River site is located in what is by far the most studied region for geothermal resources in the state. The Idaho National Laboratory began research in 1975 on regional geothermal resources and characterization of the various geothermal fields in the Snake River plain in Cassia County. A 1985 study commissioned by the Bonneville Power Administration confirmed that the Raft River area ranked first in the “Final High Temperature Ranking: Pacific Northwest” for sites in the four-state region. Subsequent studies confirmed the site has a 50% probability of producing 15.6 MW per square mile.

The DOE began construction of the world’s first commercial-scale binary geothermal power plant at the same site in early 1980. That demonstration plant operated from the fall of 1981 until June of 1982 and produced a net output of 4 MW. Five production wells and two reinjection wells were drilled to depths of from 4,500 feet to 6,000 feet. Geothermal fluid temperatures ranged from 275F to 300F (Figure 2).

By mid-1982 the DOE changed its priorities on geothermal research and decided to privatize future geothermal development—government jargon meaning that the commercial price of geothermal power was way too high. So the DOE declared victory at the $40 million Raft River demonstration plant, sold off the pumps and electrical equipment, and packed up and shipped the plant equipment to another geothermal project in Nevada. Only the capped wells and a maintenance building remained when the geothermal garage sale was over and the doors were locked. The site remained untouched for the next 20 years.

USG saw more than abandoned wells and unused equipment foundations at Raft River. It saw opportunity. The experienced USG staff knew that all the geotechnical analyses of the region, including those of geothermal resources, had been thoroughly mapped during the DOE project. They also understood that the days of building more cheap hydroelectric power plants had passed, power prices are rising, and local utilities are now extremely interested in adding more renewable power to their generation resource mix.

The business plan was sound: Build a new and more efficient geothermal plant and “fuel” it by using the existing geothermal wells. The challenges were to secure the original project site and infrastructure, surrounding area leases for geothermal energy to maximize the site’s potential for power generation, and an interconnection agreement for the power generated. Sounds like a reasonably simple plan in concept, but it was much more complicated to execute. Working in USG’s favor were steadily rising electricity costs and advances in the efficiency of the design and modular construction of binary cycles operating with low temperatures on geothermal resources.

This binary-cycle process is used by USG at Raft River—and may be used at most geothermal projects in the future—because reservoir temperatures are relatively low: 300F or less. At Raft River, the OEC receives 3,150,000 lb/hr of geothermal brine at 280F, which enters the shell side of a heat exchanger before being reinjected to replenish the reservoir.

Energy from the geothermal fluid is transferred to isopentane on the tube side of the heat exchanger to power a two-stage steam turbine with a direct-connected generator turning at 1,800 rpm. In other words, it’s a typical Rankine cycle. Isopentane is used because it vaporizes at lower temperatures and higher pressures than water, making it an ideal working fluid for recovering energy from low-temperature geothermal fluids (Figure 3). The vaporous isopentane is condensed and heat is rejected through a conventional four-cell cooling tower. 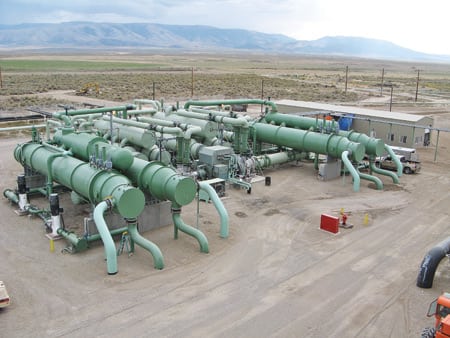 The plant’s net power output (net of power plant internal loads but exclusive of injection pump loads) is 13.7 MW. USG expects the Raft River project to operate with a plant availability of at least 96%.

The site and related assets were acquired in June 2002. Soon thereafter, USG began planning to reactivate the dormant wells, upgrade the facilities, and install a state-of-the-art binary power system.

USG obtained a DOE grant to help offset the costs of well clean-up and a flow test program that began in April 2004. The field tests consisted of production well flow tests on each of the five production wells to determine their power generation capacity and to collect data to be used in the design of the binary power system (Figure 4). 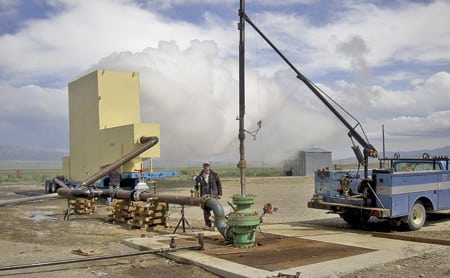 4. Inspect, don’t expect. Flow testing on all five production wells was completed in late 2004. This is well No. 5 under test. Courtesy: U.S. Geothermal

USG also upgraded or lengthened existing wells, and added new wells for a 20-year project design life as part of an overall well-improvement program. In late December last year, the company completed RRG-4, the fourth geothermal resource well for Raft River, when a new directional leg was successfully drilled through several high-permeability fracture zones and subsequent flow tests confirmed the well was producing production quantities of geothermal fluids for the Phase One plant.

RRG-3 was deepened from 5,937 feet to 6,195 feet, and a new second leg on the well was drilled to 5,735 feet. Well testing also confirmed that upgrades were successful when both RRG-3 and -4 flowed at more than 1,000 gpm, thereby demonstrating that each well had successfully connected with the geothermal reservoir and that the flow rate is adequate for the plant’s needs. A new reinjection well was also drilled to serve Phase One and subsequent additions to the plant. “The results of the current drilling program are significant because we have shown that the hot geothermal reservoir extends all the way out to our planned injection well sites,” said Daniel Kunz, president and CEO of U.S. Geothermal Inc.

Today, USG owns or leases the geothermal rights to approximately 10.8 square miles. The final 2.6-square mile parcel was leased from the Bureau of Land Management in June. The company estimates that, subject to successful drilling results, 110 MW of continuous geothermal power resources may now be available. Better yet, the measured well temperatures are between 275F and 300F at depths between 4,500 and 6,000 feet. The fluid is clean and has low salinity, although the dissolved solids content is between 1,200 and 6,800 ppm with low, noncondensable gas content—a perfect “fuel” for the OEC.

Financing a project of this magnitude can be as detailed and time-consuming as designing and constructing the plant. If one part is missing, the plant doesn’t run. Or the bills don’t get paid.

Financing Raft River meant finding a partner that would share USG’s vision for the future of Idaho geothermal energy. USG found that financial partner in an affiliate of the Goldman Sachs Group. Together, they formed Raft River Energy I LLC, which built, owns, and will operate the 13-MW Phase One project. USG contributed $5 million and transferred ownership of the five production and two reinjection wells, as well as other geothermal rights and leases covering 1,800 of the 5,200 acres of rights now held, to Raft River Energy I. Goldman Sachs matched with the $34 million needed to construct Phase One.

The project economics are compelling. Power sales are expected to be around $5 million a year from the 25-year agreement with Idaho Power Co. Then there’s the tax rebate: Idaho refunds 100% of its 6% sales tax on the cost of constructing a renewable energy plant.

Also working in USG’s favor was the Energy Policy Act of 2005, which extended the federal production tax credit (PTC) from wind projects only to include geothermal power plants completed by December 31, 2007, when the PTC was due to expire. The Raft River project was accelerated to meet that PTC deadline (although the PTC was extended for an additional year last December). The PTC, currently $19/MWh, kicks in another $1.7 million annually to push the project’s economics from merely average to exciting.

Additionally, USG has signed a $4.6 million renewable energy credit purchase and sale agreement with Holy Cross Energy of Colorado. That 10-year deal is for 10 of the 13 MW produced by Phase One of the Raft River project and is equivalent to approximately $5.25/MWh.

Construction of Raft River Phase One began in June 2006, and Ormat began construction of the OEC in November 2006 (Figure 5). Commercial operation is expected late this year.

The electrical interconnection was completed without incident. A 3.2-mile 34.5-kV extension was built to connect the geothermal power with the Bonneville Power Administration Bridge Substation, where the voltage is kicked up to 138-kV transmission line voltage. The power is then delivered to Idaho Power Co. at its Minidoka Dam substation, approximately 45 miles away.