Development of solar thermal projects in the U.S. was popular in the late 1980s, when nine plants were installed in California’s Mojave Desert. The familiar family of Solar Electric Generating Station (SEGS) projects has a total capacity of 354 MW; the largest two plants, rated at 80 MW each, entered commercial service in 1990 and 1991, respectively. Even though all the SEGS plants are still operating and producing power for the electrical grid at around 99% availability, loss of tax credits, developer financial problems, and changes in the California energy market ended development of solar thermal plants of this design.

Lately, a confluence of improved technologies, higher energy prices, and state renewable energy mandates has created a much more favorable climate for solar thermal generation. So solar thermal has risen again—this time thanks to Acciona Energy.

Acciona Energy may be unfamiliar to you unless you’re working in the wind or solar energy business. But the company’s credentials are well established, especially outside the U.S. Its portfolio of 4,690 MW installed in 175 wind farms in 10 countries makes Acciona perhaps the largest wind developer in the world. In May, Acciona Windpower entered the competitive U.S. market when it began construction of a wind turbine manufacturing plant in West Branch, Iowa. The company expects to have the capacity to produce 250 1.5-MW turbines by the end of 2008. Wind is only part of Acciona’s renewables business; solar energy plants, both photovoltaic and solar thermal, also play a major role.

Nevada Solar One builds on the experience derived from the SEGS projects and uses much of the same solar collection technology. The project was initially developed by Solargenix Energy in 2003, although it is now jointly owned by Acciona Energia and Solargenix Energy. (Acciona Energia purchased 55% of Solargenix Energy and formed Acciona Solar Power.) The only other utility-scale concentrating solar collector-style plant in the U.S. is the Saguaro Solar Power Plant, owned and operated by Arizona Public Service. That 1-MW project uses organic Rankine cycle technology and occupies a 25-acre site near the company’s existing Saguaro Power Plant, close to Red Rock, Ariz., about 30 miles northwest of Tucson. (The Saguaro Solar Power Plant was a POWER 2006 Top Plant.)

The 64-MW Nevada Solar One, touted as the largest solar thermal plant built in the world in the past 15 years, began commercial operation in June 2007. The $250 million project, located in the Nevada desert just 25 miles southwest of Las Vegas, broke ground on February 11, 2006, and was constructed in just 16 months. Solar One is the largest renewable generating facility in the state of Nevada (Figure 1). In fact, its immense size—350 acres—is, in the words of Green TV Productions’ Shaine Ebrahimi, “mind-blowing.” (You can watch Ebrahimi’s podcast interview with project leaders at www.renewableenergyaccess.com/rea/news/story?id=47845.) 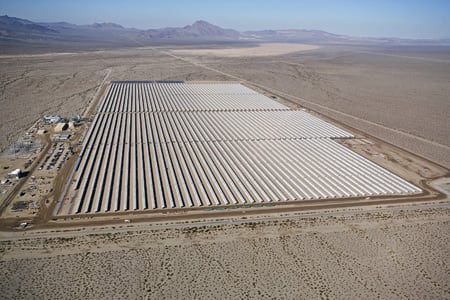 1. Heat in the desert. The 350-acre Solar One project site is located 25 miles southwest of Las Vegas. The project is the first utility-scale concentrating solar system built in the past 15 years. Courtesy: Acciona Solar Power

Power generated from the plant is purchased by Nevada Power Co. and Sierra Pacific Power under a 20-year power purchase agreement. Nevada’s Renewable Portfolio Standard requires utilities to produce 20% of their electrical generation from renewables by 2013 and includes a so-called “solar cut-out” that requires at least one-fourth of that power to come from solar sources. After all, the solar energy that shines on Las Vegas should stay in Las Vegas.

Solargenix has a 40-year lease with Boulder City for Solar One’s site at a cost of $550,000 a year. The company also signed an option to lease another 650 acres in the future. Nevada Power Co. built a new 230-kV substation to interconnect the facility. Abilene, Texas-based Lauren Engineers & Constructors was the engineering procurement/construction contractor.

The solar collection system has more than 19,000 PTR 70 steel and glass, 12-foot-long receiver tubes, provided by Germany’s Shott AG (www.schott.com), located on the focal line of the 219,000 parabolically shaped mirrors (Figure 2). These mirrors focus 30 to 60 times the sun’s energy on the receiver tubes. The collectors, first manufactured for the 1-MW Saguaro plant, are aligned on an east-west axis. Each mirror panel is rotated by 760 individual sun trackers to maximize the energy input to the receiver tubes. The trackers can pick up the sun when it rises just 10 degrees above the horizon in the morning. Flabeg (www.flabeg.com), another German company, provided the mirror panels (Figure 3). 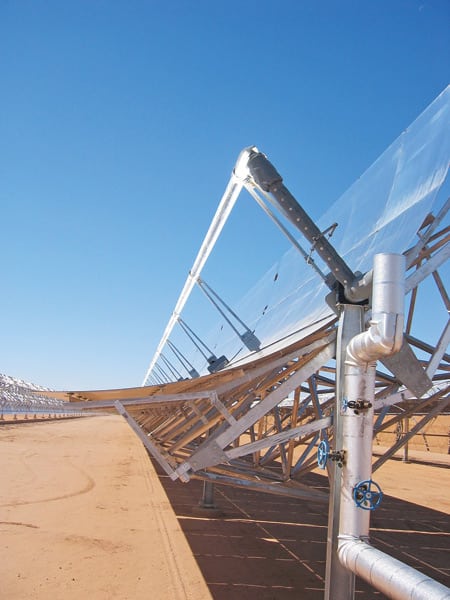 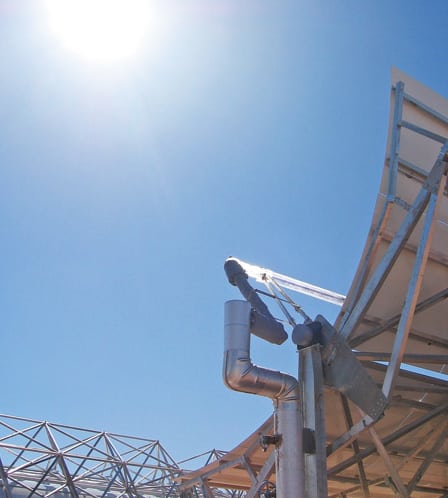 3. Focused energy. Schott AG supplied the 19,300 solar receiver tubes, each over 12 feet long, that capture the focused energy of the sun to heat a heat-transfer fluid that circulates through the receivers. Courtesy: Acciona Solar Power

Special synthetic oil serves as the heat-transfer fluid and circulates in a closed loop through the receiver tubes, which can handle up to 750F (Figure 4). A steam generator produces superheated steam to power a conventional 75-MW SST-700 two-stage industrial steam turbine with reheat (provided by Siemens Power Generation, www.powergeneration.siemens.com), which generates the electrical power. A conventional cooling tower rejects heat from the condenser. The power generation side of the plant would be very familiar to any experienced power plant engineer. It’s how the “fuel” enters and “burns” in the steam generator that makes the plant unique (Figure 5).

4. Follow the sun. The parabolic troughs concentrate the sun’s energy on a receiver tube that is positioned at the focal point of the mirrors. A tracking system synchronizes the position of the mirrors with the sun as it crosses the sky to optimize the energy collected. Source: Acciona Solar Power 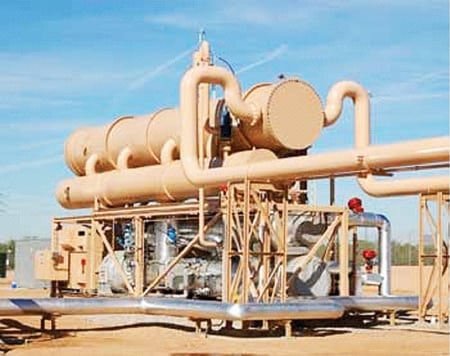 “This is a technology the utilities are comfortable with, it has proven reliability, it lends itself to economies of scale, there clearly is still some room for price reduction, and also it’s a way to get large amounts of renewable energy deployed rapidly,” said Chuck Kutscher, principal engineer and group manager of the Thermal Systems Group at the National Renewable Energy Laboratory. “If we want to get serious about reducing carbon dioxide emissions and lower our use of fossil fuels, this is a way to quickly address that. I’m very optimistic about this technology.”

The project’s green credentials extend to its “green” 10,000-square-foot administration and control building, which uses orientation, insulation, and natural daylight monitors to reduce the need for lighting and air conditioning.

A familiar criticism of wind and solar projects is that they don’t generate power during peak consumption hours. That’s not true with Solar One, where peak generation hours are a close match with its customers’ peak demand patterns. Air conditioning loads dominate in the desert, and those loads are coincident with periods of the highest solar energy production.

The cost of generation from Solar One is estimated to be around $0.15 to $0.17/kWh. With greater efficiencies and economies of scale, costs can be expected to fall in coming years. The DOE/Energy Efficiency and Renewable Energy goal is to reduce the cost for concentrating solar thermal systems to $0.035 to $0.043 per kWh by 2020. A National Energy Technology Laboratory rep says the SEGS projects are producing power in the $0.12 to $0.14/kWh range today.

Solargenix has made significant improvements to support and tracking systems since the last SEGS plant went into service. The support structure for the concentrating solar collector is reminiscent of the Luz design, but Solar One uses aluminum structural components that can be machined to close tolerances and then easily assembled in the field while maintaining those tolerances. This improves the concentrator’s ability to precisely focus on the receiver pipes, even under high wind loads.

Additional research and development work has also reduced the thickness of the mirror and its surface coatings to improve performance. The technology to produce lightweight, composite concentrator modules was not available when the SEGS plants were designed.

The Schott receivers employ a number of other improvements that weren’t available to the early SEGS receivers. Among them are a new antireflective glass coating that resists abrasion while allowing more than 96% of the solar radiation to penetrate the receiver and the use of new absorptive steel coatings that improve radiation absorption rates to 95%.

Solar One can also be differentiated from the SEGS projects by the design use of backup natural gas during periods of low-incident solar energy. SEGS is designed for up to 25% natural gas use, whereas Solar One is allowed to only use 2% natural gas to steady temperature fluctuations in the heat-transfer oil and for freeze protection. Solar One is a solar-only system that uses just 30 minutes’ worth of thermal storage to minimize the effects of transients.

One major technical challenge for Shott was to maintain the seal between the glass tubing that contains the vacuum-packed steel receiver that circulates 750F synthetic oil. Schott responded by developing a special borosilicate glass that actually has the same thermal coefficient as steel. This eliminates any differential movement as well as thermal stress in the system caused by daily swings in desert temperatures, which can dip to freezing at night and then bounce back into the triple digits the following day.

Don’t expect to wait another 15 years for the next concentrating solar facility to be built. Acciona is already hard at work developing two similar 50-MW plants in Spain and is in discussions with many other developers around the world to replicate the design of Nevada Solar One. Expect to see similar systems coming to a desert near you.