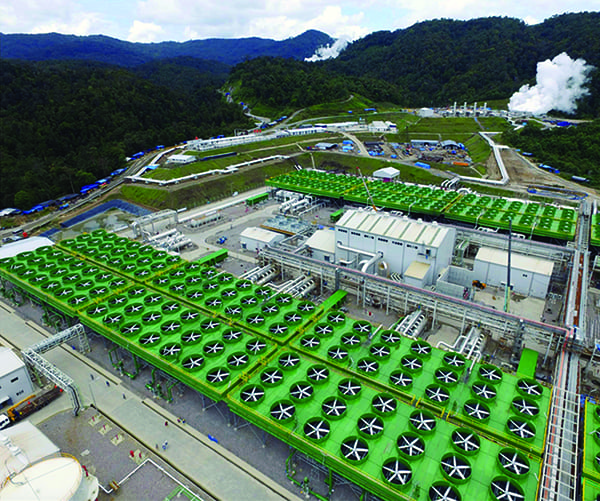 The 330-MW Sarulla Geothermal Power Plant in Indonesia took decades to develop. Backed by a multinational financing effort along with support from the Indonesian government, the $1.6 billion project may be on track to achieve payback within nine years.

Indonesia, the vast Southeast Asian archipelago of more than 17,500 islands that straddle the equator, has become an established and crucial player in the world’s energy markets. Although endowed with some of the world’s largest reserves of fossil fuels, the country with the world’s fourth-largest population direly lacks sufficient power supplies needed to boost a surging economy, a feat that is compounded by its geographic complexity.

While per capita power consumption has risen rapidly in recent years, so has the electrification ratio, boosted by the country’s determination to meet an electrification target of 99.7% by 2025. In late 2014, the government also launched an ambitious target to build 35 GW of new capacity by 2019, but experts contend numerous challenges may prevent the nation from meeting it, the most glaring of which concern management of new-build development, uncertainties related to cost-reflective tariffs, and its already strained existing infrastructure. (For an in-depth look at the country’s challenges, see: “Indonesia: Energy Rich and Electricity Poor” in POWER’s July 2013 issue and online at powermag.com.)

At the same time, an energy security crisis looms in Indonesia’s near future, owing to the ongoing depletion of its abundant reserves of oil, natural gas, and coal. That’s one reason the government has shifted its emphasis to renewables, which could offer twin benefits of low costs and environmental mitigation. The government has called for hydropower, geothermal, biomass, solar, wind, and ocean power to make up 23% of its energy mix by 2025, more than doubling its current share of 10%.

Since 2004, it has worked specifically to boost its geothermal capacity from the current 1.6 GW to 7.2 GW by 2025, allocating trillions of Indonesian rupiahs in subsidies to support risk mitigation for geothermal exploration drilling and building capacity. For the government, the investment in geothermal is sound because the country harbors a geothermal potential of about 27 GW—roughly 40% of the world’s known reserves—and it is one of the best options to provide a baseload response to the fast-growing energy demand. 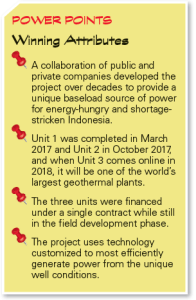 The country’s geothermal power experience got its start in 1983, and capacity has been added via expansions at most of its existing plants, which were built before 2000. Yet in terms of new greenfield developments—which tend to carry greater risks—only the three-unit Sarulla geothermal project has achieved financial closure over the last decade.

But Sarulla’s development hasn’t been easy, and it has taken decades to achieve. Exploration at the Sarulla geothermal field in Tapanuli Utara District, North Sumatra province—a site about 350 kilometers to the south of Medan, the country’s fourth-largest city—began in 1987, spearheaded by Indonesian state-owned oil and gas firm PETRAMINA. The company identified several high-temperature prospects in the greater Sarulla area, within a tectonic graben associated with strands of the Great Sumatra Fault Zone.

Between 1994 and 1998—when the Asian financial crisis stalled development—Unocal (now a Chevron subsidiary) drilled a total of 13 deep exploration wells into three prospects, one at the Silangkitang (SIL) field and two at the Namora-I-Langit (NIL) field. The discovery amounted to about 330 MW. All wells reportedly produced fluids with temperatures of more than 260C and up to 276C.

After long negotiations with the government concerning tariffs, guarantees, and other support, the Sarulla project developers eventually gained rights to use the geothermal field from PETRAMINA in April 2013, and nearly immediately, the group also signed a 30-year power purchase agreement with PLN. Then, in March 2014, project developers concluded financing agreements with a syndicate composed of the Japanese Bank for International Cooperation, Asian Development Bank, and six multinational commercial lenders.

Construction kicked off in earnest in May 2014, and this March, SIL, the first 110-MW unit of the power plant, commenced commercial operation (Figure 1). It is “performing well,” Ormat said. Successful testing was soon completed at the second unit, NIL 1, and the unit began supplying power on October 2, 2017. The third unit, NIL 2, is under construction, and Sarulla expects that the unit will commence operation in 2018.

While each site is characterized by a unique composition of steam, brine, and gases, the units use a combination of Ormat-developed technologies, which were chosen after a comprehensive study that took into consideration the thermodynamic efficiency, the geothermal fluid characteristics, and environmental aspects. The configuration essentially combines single flash and binary organic rankine cycle technologies in a concept known as integrated geothermal combined cycle (IGCC), or what Ormat calls geothermal combined cycle units (GCCU). GCCU “represents an excellent solution for medium to high pressure steam resources,” Ormat said.

Sarulla is Indonesia’s first plant to use IGCC, though the technology is well-established at other high-enthalpy geothermal fields around the world. One notable aspect is that it separates brine, producing more power from the same amount of fluid extracted from the reservoir than conventional flash plants. Each of the Sarulla systems consist of a backpressure steam turbine and bottoming Ormat Energy Convertors (OECs), which are heated by the low-pressure steam exiting the topping steam turbine. The steam exits the steam turbine and enters the OEC vaporizer at just above atmospheric pressure.

“In addition Ormat’s technology allows practically 100% re-injection of the geothermal fluid back into the reservoir, maintaining the sustainability of the geothermal resource thus increasing power and mitigates the negative effect of gases,” Ormat said. It also minimizes leaks of non-condensable gas. “The selected configuration provides the lowest project risks related to brine chemistry and maximizes the life of the reservoir,” it added.

Ormat, which supplied the GCCU conceptual design and OECs, noted the supply contract was the largest single contract it has signed to date. “We manufactured and delivered our equipment ahead of schedule, mainly due to the improvements implemented across our entire value chain and to our professional teams,” said Isaac Angel, Ormat’s CEO. Toshiba supplied the geothermal steam turbines and generators for the flash systems. Hyundai Engineering and Construction served as the project’s engineering, procurement, and construction contractor.

According to the Climate Policy Initiative (CPI), a policy and finance think tank that helps governments, businesses, and financial institutions drive growth while addressing climate risk, the Sarulla geothermal project is the largest single-contract geothermal project in the world. While CPI estimates that the project’s total capital expenditures amount to about $1.6 billion—or about $5 million/MW—with 59% of costs rooted in field development and construction, the project’s cash flow projections (at a capacity factor of 90%) are positive, owing to fair, even if subsidized, tariffs from Indonesia’s government. “The way the actual tariff is structured allows the project to collect revenues at higher tariffs during early years of operation and achieve payback of investment costs within nine years after all units are operational,” CPI said.

Also notable is that significant exploration work was already completed before Sarulla started construction. Sarulla was willing to pay PLN $70 million for the completed exploration because it reduced risk, CPI said, and the project’s success could incentivize the government to take a larger role in geothermal ventures, specifically on the exploration front.

Geothermal development worldwide is typically hampered by high costs, usually requiring at least 70% of expected capacity to be drilled before commercial financing is available, CPI noted. While the involvement of commercial lenders in Sarulla’s field development “may not always be replicable in other projects,” the project’s completion despite a complicated regulatory framework, concerns about electricity tariffs, and complex financing and bankability issues deserves recognition. ■