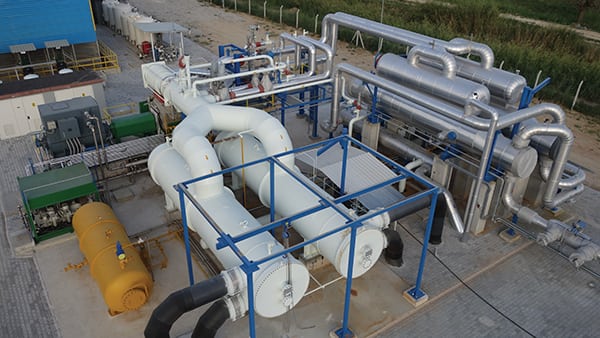 Geothermal energy has long been handicapped by its need for high-temperature resources to generate economic power, but innovations in binary Organic Rankine Cycle systems are making it possible to exploit low-temperature sites. An innovative plant in Turkey using Italian technology has taken things a step further with a unique two-pressure, multistage, single-disk turbine.

One of the oldest yet least-exploited renewable energy resources may be poised for a resurgence.

Human beings have used geothermal hot springs for a variety of low-tech purposes from prehistoric periods forward, but their use in energy production—which began in the early 20th century—has remained limited. Worldwide, according to the International Energy Agency (IEA), cumulative installed capacity is a mere 12 GW, having long since been left in the dust by newer renewable technologies like wind, solar, and bioenergy.

Geothermal’s biggest challenge is that, despite the earth’s enormous amount of thermal energy, little of it is concentrated in recoverable form. High-temperature (>150C) hot springs with sufficient flow to support a power plant are rare and often located in remote, difficult-to-access areas. That’s kept geothermal generation small and decentralized: Most large geothermal “plants” are actually networks of generating facilities spread across a geothermal field. Only a few individual plants exceed 200 MW in capacity. This decentralized approach makes geothermal expensive, especially if extensive drilling is necessary. 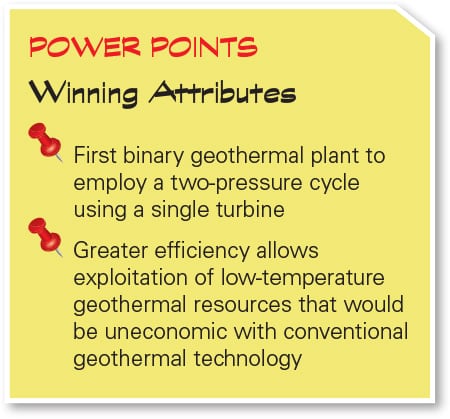 Things have begun to change over the past few decades, however. The development in the 1980s of binary-cycle geothermal plants, which use a working fluid with a low boiling point (such as butane or pentane) in a closed loop to drive a turbine (known as Organic Rankine Cycle, or ORC), has allowed exploitation of lower-temperature geothermal resources, which are far more common than high-temperature locations (see “New Plant Design Options Expand Geothermal Power Operations” in the April 2016 issue, and “Geothermal Energy: Is New Technology Resetting the Agenda?” in the October 2015 issue). Binary plants, according to the IEA, are the fastest-growing sector in geothermal and are likely to drive substantial growth of geothermal generating capacity over the next decade.

But binary systems are more complicated than conventional flash steam and dry steam geothermal plants, which means costs can be higher. Finding ways to simplify binary designs and improve efficiency is key to further development of this sector.

Turkey has extensive geothermal resources that it has exploited for decades, a legacy of its location atop one of the most active fault systems in the world. Geologists have identified more than 200 geothermal fields in the country, and the potential electrical generating capacity has been estimated at more than 4.5 GW. A substantial amount of geothermal energy in Turkey is used for district heating and agricultural purposes.

Turkey’s first utility-scale geothermal plant began operations in 1984. The nation’s total electrical generating capacity from geothermal energy at the end of 2015 was 575 MW across about 20 facilities, ranking it ninth worldwide, just behind Kenya. That total is expected to grow to 1,077 MW by 2020, and the government has set a target for 1,500 MW by 2023.

Geothermal generation in Turkey is eligible for feed-in tariffs available for other renewable resources. In addition, the European Bank for Reconstruction and Development and the Clean Technology Fund launched a $125 million investment program in January 2016 to support development of five new geothermal plants totaling at least 60 MW.

Geothermal energy in Turkey is concentrated in western and southwestern Anatolia. Most of the plants are fairly small, in the tens of megawatts, and rely on high-temperature resources. To further build out the nation’s capacity, exploitation of lower-temperature resources will be necessary. Because of this, newer binary plants are beginning to see development, and one of the newest, Tosunlar 1 in the Denizli-Tosunlar geothermal field, employs a new technology that promises to make low-temperature binary geothermal generation significantly more efficient.

Italian firm Exergy has developed a different approach that it calls the radial outflow turbine. In this approach, the turbine uses a single disk with multiple stages (Figure 1). The high-pressure fluid enters at the center of the disk while the low-pressure fluid enters further out, toward the edge (Figure 2).

The single-disk configuration means substantially fewer components for the turbine system. This lowers overall costs and reduces operational and maintenance demands because of the reduced amount of rotating equipment and associated auxiliaries. In addition, because the radial outflow turbine is much smaller than a conventional two-stage turbine, the plant footprint is smaller, meaning reduced construction costs.

Compared to a single-pressure turbine of the same size, Exergy says the radial outflow turbine can achieve up to 22% higher efficiencies. This makes it ideal for sites where temperatures are lower and geothermal flows are limited and conventional designs would be uneconomic.

Turkish firm Akca Enerji is a subsidiary of Akca Holding that specializes in renewable energy. In 2013, it contracted with Exergy to build a small geothermal plant in the Denizli region of southwest Turkey. Geothermal temperatures at the site were low, at 105C, and the flow was fairly small, at 12 tons/hour of steam/brine mixture. The plant draws cooling water from a nearby river.

Exergy has since supplied several other larger geothermal plants in Turkey using the radial outflow turbine design. The 12-MW Denizli Umurlu I plant entered operations in November 2015; a second unit on the same site came online this fall, along with six others the company has supplied for Turkey so far. ■