Employees of Alabama Power, a Southern Company subsidiary, routinely work near energized wires, intense heat, nuclear fuel, heavy equipment, moving vehicles, and pressurized equipment, as well as under other conditions that require exceptional safety attitudes and measures. Though it is vitally important to provide electricity to customers, neither company believes that doing so is worth risking the safety of its workers.

In January 2005, safety figures for southern gencos compiled by the Southeastern Electric Exchange (a nonprofit trade association of more than 20 investor-owned utilities), indicated sub-par performance for Alabama Power the prior year. The figures were presented in a more-detailed version of the table produced here, which shows regional corporate safety numbers for 2006. As a consequence, early in 2005, Alabama Power sharpened its focus on worker health and safety through a program called Target Zero. 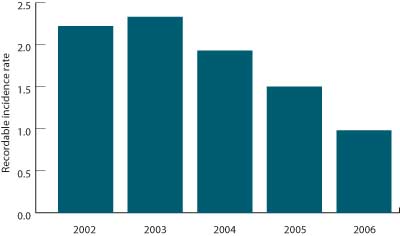 Although no one ever plans to get injured at work, some people feel that accidents are inevitable, so having one or two is acceptable. However, under Target Zero, the assumption is that all routine tasks can be accomplished safely. At first, zero accidents may seem like an unrealistic goal. But then again, most plant employees work their entire careers without sustaining an occupational injury, says Chris Hutzler of Alabama Power’s Generation Safety & Health department.

In other words, zero accidents is an achievable personal and organizational goal. Target Zero emphasizes starting any job with safety in mind. Before starting a job, staffers first identify any obvious hazards and determine how to avoid them. They then review safety procedures with all of the employees and contractors who will perform the work. When working on an assignment, everyone involved watches out for one another. If any unsafe conditions are observed, corrective action is immediately taken.

According to David Ratcliff, CEO of Southern Company, the main goal of Target Zero is to ensure that all employees return safely home to their families every single day. "Will we ever achieve that goal? Maybe not, but that is our goal," he says.

Future plans for Target Zero include integrating health and wellness into the program and promoting family safety 24/7. Alabama Power will continue to assess its implementation of the program and revise it, if necessary. Other important initiatives will include revising the company’s clearance procedures and developing a safety and health conference.

Another addition to the Target Zero program will be a "safety observation process" through which trained personnel will periodically observe the safe and at-risk behaviors of employees. Appropriate feedback will be given to everyone observed. All of the observation results will be tracked, trended, and communicated to the entire plant workforce.

Yet another goal is to implement a job safety briefings process. The safety briefings will be used to point out hazards and explain the protective measures that should be taken to protect employees from them. Going forward, the intent is to evaluate and update the process periodically, so that managers who conduct briefings can give the best and most current information to the personnel responsible for doing the work.

Along these lines, another planned initiative aims to better define and communicate the specific safety responsibilities of team leaders. This will be accomplished by documenting specific safety expectations in performance management plans and by periodically assessing if expectations are being met. For example, Alabama Power is developing, and plans to implement, a process to measure, track, and publicize safety program elements or activities related to injury prevention and attitudes toward safety.

The final addition to the Target Zero program will be a root-cause analysis for every recordable injury and significant non-injury safety event. The results will be used to guide the implementation of recommendations in a timely manner.

— This article is based on a paper presented by Chris Hutzler of Alabama Power’s Generation Safety & Health department at the 2007 meeting of the PRB Coal Users’ Group.