Integrated gasification combined-cycle (IGCC) technology, a process of gasifying coal that allows the capture of carbon dioxide emissions, has tremendous potential for meeting future baseload generation demand. Though it is one of the leading alternatives for producing clean power from coal, IGCC faces a precarious future due to rising capital costs and regulatory uncertainty.

We’re already seeing the effects of that uncertainty. Project momentum slowed dramatically in 2007, according to a new study (see sidebar, end of story) from Emerging Energy Research (EER). Despite delays or cancellations of several prominent IGCC projects in 2007, 48 projects with a combined capacity of over 25,000 MW remain in the global IGCC pipeline, according to EER.

"Natural gas price volatility, concerns over climate change, and heightened attention to damaging pollutants continue to drive interest in IGCC," says EER Senior Analyst Alex Klein. "It has become abundantly clear that if coal is to remain a staple of new build power generation, technologies that mitigate carbon dioxide emissions will be required. IGCC leads these technologies for its low cost potential to capture a significant percentage of its carbon dioxide emissions at commercial scale."

For IGCC to become a realistic option for widespread power generation, long-term stable carbon policies are needed to generate roll-out momentum for the technology. As climate change concerns have dramatically curtailed the building of new traditional coal power generation, the industry has shifted attention to clean coal alternatives such as IGCC that are able to capture CO 2. Without established legislative frameworks for carbon sequestration, however, or a clear view of how the additional costs of CO 2 capture can be recovered, IGCC development will continue to stagnate.

On balance, 2007 was a disappointing year for IGCC project developers. The 11 projects cancelled during the year represented some 7,000 MW of generating capacity, according to EER. The pace of development for projects already in the pipeline also slowed considerably.

"While overall confidence in IGCC as a commercial technology has improved considerably, the difficult market environment facing all new build coal use outside of China and India — including escalating capital costs and carbon policy uncertainty — has dampened IGCC market activity and competition," says Klein (Figure 1). 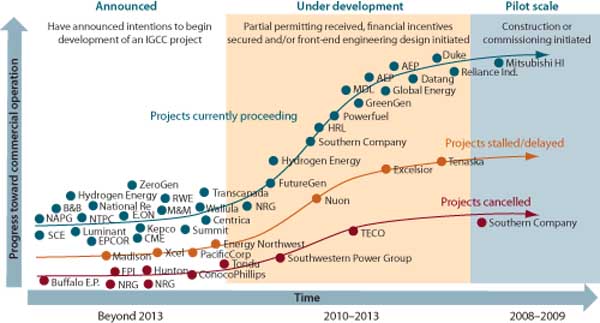 These new players are increasingly attracted to regions with viable enhanced oil recovery (EOR) opportunities, because CO 2 off-take prices are expected to increase, driven by escalating oil prices. Those economics would help to offset much of the additional costs of investment of carbon capture and transport.

Currently, 25,500 MW of IGCC projects in the global pipeline are under development in 10 countries. The overwhelming concentration of IGCC development is under way in the U.S., according to EER research. The U.S. accounts for nearly 60% of the current coal- and/or petcoke-based IGCC projects under consideration. On the back of significant financial support from federal and state governments, the U.S. is leading commercialization efforts of IGCC globally with 26 projects at some stage of development in 17 states with a combined capacity of just over 15,000 MW.

Though the U.S. will continue to be the most significant market in terms of IGCC activity, notable increases in project development can be expected from Canada, Australia, and China.

Australia is following in the footsteps of the U.S., boosted by strong state and federal policies targeting clean coal technologies. IGCC development is also growing in western Canada, driven by EOR opportunities. In China, as air quality becomes a greater threat to economic development and as gasification experience increases for chemicals and fuels production, confidence in IGCC technology is growing. Europe is expected to see rather slow development of IGCC at least until 2015 (Figure 2), according to EER’s study. 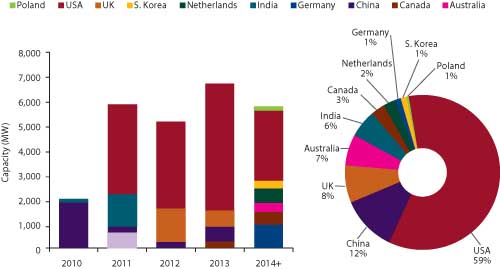 In the power generation market, IGCC development is being driven largely by major gas turbine vendors, such as Siemens, GE, and Mitsubishi. They’re looking to supplant the new construction of coal boilers and to target replacement of obsolete coal plant infrastructure. Major gas turbine vendors see the climate-challenged market environment as an opportunity to leverage their combined-cycle gas turbine (CCGT) technology to capture coal plant market share at a time when natural gas price volatility threatens long-term competitiveness of their traditional CCGT business.

"The entry of these established technology providers able to offer standardized turnkey IGCC power plants for the first time has simplified plant procurement and added significant credibility to the IGCC sector, broadening the potential customer base for commercial IGCC projects," says Klein.