A federal appeals court has rejected a National Mining Association (NMA) suit seeking to throw out new regulations issued by the Mine Safety and Health Administration (MSHA). The rules were to improve protection for miners in the wake of accidents at two West Virginia coal mines in January 2006 that killed 15. (See COAL POWER January/February 2007, p. 6.)

The industry group raised a number of procedural and substantive objections to the rules, issued by the MSHA in December 2006, but the U.S. Court of Appeals for the District of Columbia Circuit said the agency acted properly and within its authority in establishing the new safety requirements for miners.

Among other things, the rules require operators of underground coal mines to sharply increase the number of "self-contained self-rescuers" (SCSRs) — oxygen-giving devices for miners trapped underground — in tunnels excavated to provide escape routes in emergencies.

The rules also require mine operators to install additional gas-detection devices to alert miners when they need to use their SCSRs, to install additional directional lifelines in the escape tunnels, to hold quarterly emergency evacuation drills, and to beef up training in the use of SCSRs (Figure 4). 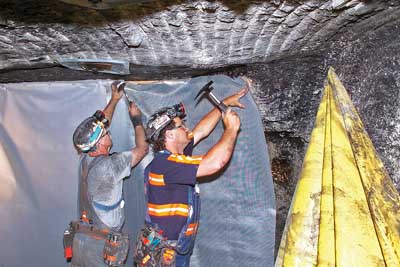 4. Miners hang a curtain for ventilation as part of a training exercise. Courtesy: Mine Safety and Health Administration

The new requirements came in response to separate accidents that occurred within a three-week period in January 2006 at the Sago and Aracoma Alma mines in West Virginia. The January 2 Sago accident, the industry’s worst since 2001, killed 13 miners when an explosion collapsed mine walls, blocking access to escape tunnels.

In the January 19 Aracoma Alma accident, two miners died when smoke from a conveyor belt flowed through gaps in a mine wall and into escape tunnels, obscuring the miners’ vision and preventing them from locating the tunnels.

The MSHA quickly issued temporary emergency rules requiring mine operators to install at least one SCSR for each miner in primary and emergency tunnels. The final rule at issue in the NMA suit expanded the SCSR requirement to give mine operators some flexibility in ensuring that each coal mine has more than enough of the oxygen devices to give trapped miners a fighting chance to survive.

The final rule gives mine operators the option either to provide one SCSR per miner in escape tunnels or to put one additional device (thereby doubling the number of required SCSRs) in a "hardened room" cache located between two adjacent escape tunnels that is accessible from both tunnels.

In comments on an earlier version of the rule, the NMA had suggested the use of a cache to store SCSRs in "cross cuts" connecting escape tunnels as an alternative to requiring mine operators to store SCSRs in escape tunnels. But the industry group did not suggest that the cross cut caches contain twice as many SCSRs as would be required if the devices were placed in the escape tunnels, nor did it propose that the central storage caches be "hardened" in the manner that the final rule requires.

In its petition to the court, the NMA challenged the ventilation shaft requirement as well as the stipulation that the optional cache be hardened to survive explosions. The NMA said that the MSHA never mentioned the latter requirement in its proposed rules and thus violated administrative procedure law requiring adequate public notice and opportunity for comment on regulatory proposals.

But the court rejected the NMA’s argument, noting that MSHA officials during public hearings on the proposed rule had mentioned the possibility of using hardened rooms as an alternative to putting SCSRs in escape tunnels. The court also noted that, although the NMA never responded to this suggestion, several of its member companies did respond.

The court also pointed out that the agency expanded the public comment period by 30 days to give the industry additional time to respond to all aspects of the proposed rule raised in the public hearings. "The hardened room option was thus a logical outgrowth of the proposed rule, or put differently, the mining association had adequate notice," the court said in its nine-page opinion.

The court similarly rejected the NMA’s assertion that the MSHA’s "hardened room" requirement was arbitrary and capricious because the agency did not sufficiently explain its decision to include the requirement.

NMA spokesman Luke Popovich said the court decision could have the perverse effect of reducing mine safety rather than enhancing it. "We don’t think that this ruling is going to advance the cause of mine safety one bit, because what we raised, and what the court overruled, were very practical objections to what the agency recommend," said Popovich.