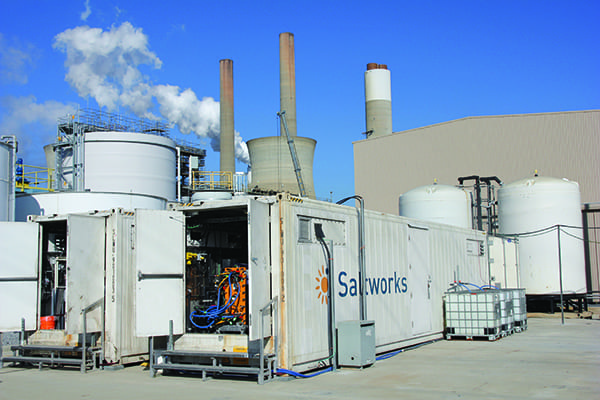 POWER’s 2020 Water Award goes to Saltworks Technologies for successfully piloting a novel application of a 50-year-old technology at a coal plant. The company’s solution promises to slash costs of treating flue gas desulfurization (FGD) wastewater by up to 50% by targeting chlorides and recycling the water.

Since its introduction in the 1960s, electrodialysis (ED) technology has been adopted for a wide range of industrial applications, and today it is the second-most widely used membrane desalination technology. The traditional technology involves applying a direct-current electric field to flux positive ions across cation exchange membranes in one direction, and negative ions through anion exchange membranes in the opposite direction. More recently, it has benefited from an innovation that helps to keep the membranes cleaner by allowing the polarity of electrodes and hydraulic channels to “reverse.”

But in 2010, Canadian water treatment solutions provider Saltworks Technologies Inc. set out to refine electrodialysis reversal (EDR) technology even further. As it told POWER in May, while initial developmental efforts yielded a new type of ion exchange polymeric membrane that was ductile and highly conductive, because it was looking to install it in its next-generation EDR plants, it further modified that membrane to make it selective to monovalent ions. Saltworks calls the resultant technology monovalent electrodialysis reversal (mEDR, Figure 1). “Under an electrical field, these membranes selectively allow monovalent anions—such as chloride—to pass through the membrane and concentrate up in the brine reject stream, while blocking multivalent ions, such as sulfate,” Malcolm Man, executive vice president of Business Development, explained.

While Saltworks’ first applications of the novel technology were centered on mining wastewater, its efforts lined up with research by the Electric Power Research Institute (EPRI), a nonprofit organization that brings together scientists and engineers from across academia and industry to help address challenges related to electric power. EPRI, which has explored a variety of flue gas desulfurization (FGD) wastewater issues since 1996, was looking at clarifying the factors that impact physical and chemical treatment costs of FGD wastewater. The research was timely given that the Obama administration had just put out final Effluent Limitations Guidelines and Standards for the Steam Electric Power Generating Point Source Category, technology-based guidelines that limited total dissolved solids (TDS) in FGD wastewater.

“Mining waters have similar chemistry to FGD wastewater, where both are highly scaling in gypsum,” Saltworks said. That’s why when EPRI introduced the FGD application to Saltworks, the company set out to tweak the process and begin small-scale testing with EPRI’s insight and support.

But rather than focusing on the whole gamut of TDS constituents, “The team focused on one bad actor that limits FGD cycles and results in the wastewater blowdown in the first place: chlorides,” Man said.

FGD systems in coal plants, which work to tamp down sulfur dioxide air emissions, produce wastewater, as chlorides accumulate in sulfur scrubber circulating water. Most FGD installations include some wastewater treatment to remove heavy metals and fluorides via moderate pH precipitation combined with polymer and coagulation, followed by a filter press. That process is known as “triple box.” However, it still releases a treated water that is replete with TDS, including chloride, selenium, and other constituents. (For an in-depth look at existing FGD wastewater treatment systems, see “Lowering Cost and Waste in Flue Gas Desulfurization Wastewater Treatment” in POWER‘s April 2017 issue.)

Because re-using the scrubber water in multiple cycles would result in accumulated chlorides, operators release—or “blow down”—FGD wastewater and typically add in cleaner, diluted water to keep chlorides below a set level. “Chloride blowdown levels range with operations from 10,000 milligrams per liter (mg/L) to as high as 30,000 mg/L,” said Saltworks, noting that increasing chloride concentrations can pose insidious problems, such as those related to corrosion, as well as hampered sulfur dioxide absorption.

However, if the chlorides can be removed by some sort of a “chloride kidney,” that opens up water re-use, less make-up water, and up to 90% less FGD wastewater blowdown, the company said. The minimal blowdown may also become more manageable. “EPRI has been working on exciting developments to solidify that wastewater directly without need for treatment, since the volume is so small,” Man noted. More importantly, “This method also avoids the complicated treatment systems required to treat the FGD wastewater, since a tight spec for discharge does not need to be met. Instead, an easier spec for ‘lower chlorides’ is met,” he said.

Under the mEDR process, “Because sulfates are rejected from the brine and not concentrated alongside calcium, expensive soda ash softening is avoided,” the company said. mEDR also requires less pretreatment due to its organic and suspended solids’ resilience (of less than 20 micrometers), while concentrating brines (in a single-membrane step) up to 180,000 mg/L.

Chlorides can technically be removed to less than 200 mg/L. However, reducing chlorides to 1,200 mg/L to 1,500 mg/L can prove more economical mainly because, at less than 1,200 mg/L chloride concentrations, the membrane flux is reduced and the electrical resistance increases, increasing membrane area (larger plant) and power requirements, the company said.

To assess the economics of the process, Saltworks said it reviewed and tested “multiple options to inform an appropriate path for development.” If compared to the traditional reverse osmosis and evaporator processes—which includes chemical softening, seawater reverse osmosis, and evaporation—and ultra-high-pressure reverse osmosis (UHPRO)—a newer process that involves chemical softening, seawater reverse osmosis at 80 bar, and UHPRO at 120 bar—mEDR “holds the greatest promise to provide a step change in FGD wastewater treatment cost reduction.” While the evaporator can produce more concentrated brine reject at 180,000 mg/L TDS than UHPRO (at 130,000 mg/L), the evaporator process costs more than UHPRO. But based on Saltworks’ testing on FGD waters, the chemical softening used in both processes accounts for almost 50% of the treatment total cost of ownership (which includes capital plus operating cost).

Saltworks said it has so far conducted two significant tests—and both have shown good potential. First, it tested the mEDR process on an off-site micro-pilot in 2017 to prove its feasibility and provide initial performance data. In early 2019, with the backing of the U.S. Department of Energy, it moved to a larger 3-cubic-meter-per-day field test with a full-scale sized stack system at a Southern Co. coal plant in Georgia.

That pilot, completed in June 2019, operated 24/7 for 60 days with 100% uptime. The larger pilot met treatment goals of “removing up to 85% of the chlorides to enable recycling of treated FGD wastewater back to the scrubber” via an internal power plant recycling process. As significantly, the pilot also showed the process can “produce a non-scaling concentrated brine that could be directly solidified with fly ash and other additives or go to an evaporator crystallizer without pretreatment for zero liquid discharge,” Man said. And, as expected, it also successfully treated the highly scaling FGD wastewater—without chemical softening—eliminating costs associated with chemical and sludge handling and disposal.

Now that the pilot is proven, the next step is to run a larger, longer-term demonstration, the company told POWER. “We need to ensure the chloride treated water can be recycled over the long term, characterize the new and lower in-situ blowdown volumes, and determine the management of these lower volume wastes,” it said.

If future testing is successful, the company envisions mEDR could be adopted by coal plants worldwide. Applications, meanwhile, could also be extended to the oil and gas industry for desalter wastewater recycling; in the mining industry, to remove chlorides from mine wastewater and process streams to prevent equipment corrosion; and in industry, for corrosion prevention. ■