With nearly 30 years of evolution — and three fundamental technology generations — since their initial introduction into power plant applications, distributed control systems (DCS) have improved considerably. Though specific release dates vary among vendors, the first generation of DCS appeared during the 1980s, the second generation during the 1990s, and third generation in the mid-2000s.

With each major system release, many new DCS capabilities and features have been added, resulting in new benefits for plant designers and owners.

Perhaps the most significant feature of the early DCS was the ability to geographically distribute control system processors and I/O components, thus influencing power plant designs by greatly reducing the amount of field wiring needed between control equipment and field instruments.

As the first-generation DCS evolved, advances in technology enabled PC-based engineering tools as well as function block programming, which greatly simplified the construction and flexibility of controller-based application code. As controller speed and memory increased, control system engineers quickly realized that control logic strategies truly would only be limited by the engineers’ imagination.

When compared to previous technologies — plant computers and electrical analog control systems — the first-generation DCS stands out as a tremendous leap in technology for its time.

One limiting factor of first-generation systems is that they were designed to use proprietary communication technologies. Consequently, connections to third-party systems were typically limited to custom-developed interfaces. This changed during the 1990s, and the DCS became recognized as the optimal vehicle for integrating process data from the various automation platforms used within a typical plant.

Additionally, the use of commercial off-the-shelf technology emerged during this period as standard Ethernet networking components and Microsoft Windows-based systems were applied at the DCS HMI layer.

As demand for more open systems grew — along with strong interest in integrating fieldbus technology and making full use of an integrated operations and engineering environment — the third-generation DCS emerged.

Aspect System Technology. Embedded within the 800xA DCS system’s platform core is a new object-oriented technology called an "aspect system." Aspect system technology provides an enterprise-wide data management tool within the DCS operator’s console. It allows plant O&M information to be directly linked to DCS graphical objects. This means users with secure access to the DCS screens (such as plant operators, maintenance personnel, and managers) can get personalized views of important plant information. Providing the right information to the right person at the right time for informed decision-making saves time and thereby improves operational efficiency. 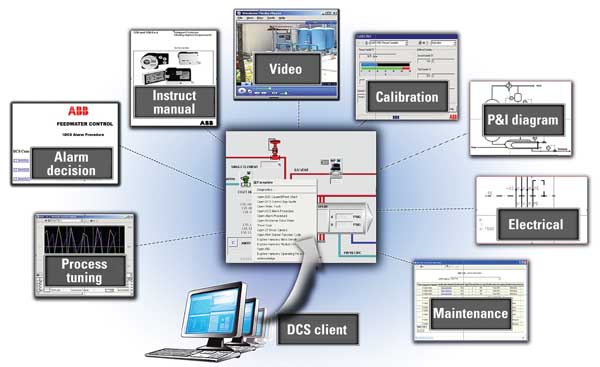 Permissions can be configured to manage individual views into the aspect links, thereby ensuring that system users can only view information relative to their specific job function.

Process Optimization and Asset Optimization. To support the goal of increased plant process efficiency, advanced control can be added to the DCS using model predictive controller (MPC) technology. The MPC approach provides a multi-variable algorithm that runs at a much higher frequency than earlier optimization techniques (typically, cycle times are measured in seconds, rather than minutes). The result is an accurate process model that can be added to base system controls to produce less variability and smoother transitions. Less variability typically enables processes to operate closer to equipment design limits, therefore enabling significant improvements in steam temperature, ramp rate, heat rate, situations with complex coordinated control, and reduced emissions.

By applying object-oriented technology, asset optimization is seamlessly integrated with commercially available computerized maintenance management systems (CMMS). From the DCS process graphics, plant maintenance staff can get an asset management view of the plant to access work orders, spare part inventories, and maintenance activities. They can also rely upon the DCS to identify problems and automatically generate a fault report for automated download back into the CMMS.

Expanded Connectivity for Process Control. Third-generation DCS controllers and I/O hardware occupy much smaller footprint than earlier systems. DIN rail components operate using 24VDC and can be routed via redundant fiber optic networks. This makes for a more scalable solution, as it is much easier and economical to physically distribute clusters of remote I/O throughout the plant. DCS controller technology has also evolved to support SIL 2 and 3 standards for safety as well as the traditional National Fire Protection Association 85 requirements applied to many utility applications.

IEC 61850 is a recent development that is used for electrical system integration into the plant DCS. With capabilities of integrating intelligent electrical devices (IED) for control and asset monitoring and device management, the IEC 61850 standard is emerging with connectivity options for protection relays, drives, medium- and high-voltage switchgear, and other equipment. Also, specifically for power plant applications, DCS controllers can integrate field-bussed specialty cards for turbine control (overspeed, auto synch, and valve position), vibration condition monitoring, and flame scanners.

Finally, thought they’re not classified as fieldbus protocols, the highway-addressable remote transducer (HART) and Modbus over Ethernet have also been more tightly integrated into the third-generation DCS controller level (Figure 2). 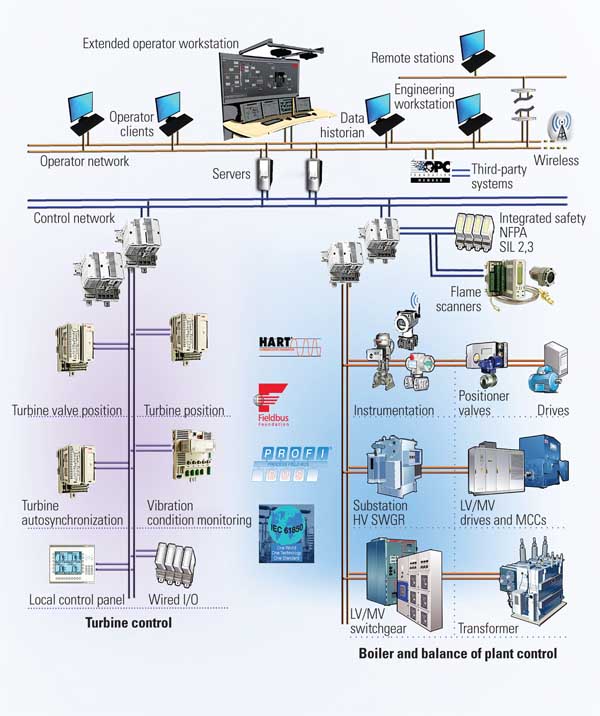 Engineering Tool Enhancements. The DCS software interface employs object-oriented technology to provide user-definable "library objects." This approach allows complete control strategies — such as motor-operated valve control, faceplate, graphic element, and aspect links — to be packaged into a single library object that is available as an element within the project library.

As an object is used repeatedly throughout a project, it maintains its reference "inheritance" to the original library object. This allows for a consistent design approach for all similar plant devices and also simplifies maintenance of control configurations when code modifications are required. Control programming methods are available to support function blocks from previous first- and second-generation DCS systems as well as IEC version function blocks, ladder logic, instruction list, structured text, and sequential flow charts.

The virtual controller is easier to maintain than the previous-generations’ hardware-based stimulated simulators. Furthermore, when combined with the OEM HMI and actual operator process graphics, the virtual controller approach provides the most realistic simulation system environment and can be easily coupled to a range of low- to high-fidelity simulation process models.

DCS system capacities and controller performance will continue to improve, therefore enabling even higher I/O quantities per controller from both hardwired and integrated fieldbus paths. Continued and more widespread use of DCS electrical system integration using the IEC 61850, Profibus, and Profinet industry standards is expected.

Regarding the physical layer of fieldbus technologies, one would expect that all standard protocols will evolve toward a redundant high-availability Ethernet for fieldbus trunk networks. This would allow a common industrial Ethernet field network to be run to all areas utilizing fieldbus instruments and electrical gear and would eliminate the need for multiple media types when various bus protocols are used. The need for less-protocol-specific cabling would result in a more cost-effective plantwide wiring scheme.

Also anticipate increased use of wireless technology for instrumentation using standard protocols and perhaps mesh networks for the integration of communication devices within the DCS for control as well as for asset optimization.

For the foreseeable future, DCS application software will continue to provide new strategies and features in support of plant goals to improve operations, process production, and reliability. The addition of information systems that enhance the retention of staff expertise (a necessity in plants with an aging workforce) will result in operational improvements and support efficient plant operations.

We also anticipate the increased deployment of asset management with process-related asset-monitoring objects that are specific to power plants. Computerized maintenance management strategies within plants will also improve reliability.

As business demands may pressure power plants for production increases, there also may be new motivations to apply advanced optimizing control applications. For example, as more electrons entering the electrical grid are produced by sometimes less-predicable sources, such as wind and solar energy, new operational requirements may be imposed upon existing generating units. Situations such as this can drive future plant adaptations that may benefit from optimized control or advanced control combined with electro-mechanical modifications to support variable-load optimization.
–Ralph Porfilio (ralph.porfilio@us.abb.com) is the director of technology and applications engineering with ABB’s Power Generation North America Division (www.abb.com), and ABB Inc. company.