Marine energy prototypes in the UK are sailing ahead of entries from the rest of the world, propelled by government backing and public support. According to a recent analysis from Carbon Trust, a government-funded but independent think tank set up to deal with climate change issues, 25% of the world’s technologies are already being developed in the UK—and that the country could be the “natural owner” of the global wave power market, generating revenues worth £2 billion per year by 2050.

The group has been tasked with assessing and managing bids to the latest round of funding, £22 million that will be granted to wave and tidal energy prototypes. The call follows Carbon Trust’s finding that extra support would be needed to take wave and tidal devices successfully from initial prototype development through to early-stage commercial generation. The group has worked with 60 different marine energy devices since 2003. Of those, two projects have so far made it out of prototype stage: the Pelamis Wave Power device—the Sea Snake—and Marine Current Turbines’ tidal stream device, SeaGen. Carbon Trust will now work with these companies to reduce costs associated with installation, operation, and maintenance.

Both devices have in recent months reached milestones. The scarlet second-generation Pelamis device, which just last year was inaugurated as part of the world’s first commercial-scale wave-power station at Aguçadoura, Portugal, is due to be installed next spring at the European Marine Energy Center in Orkney, northern Scotland. The device was ordered by Germany’s E.ON, which reflects a serious interest in the emerging—and expensive—technology. But it also signals that the prototype may float, despite the economic downturn, which left even established and ubiquitous renewable technologies hard-hit. In October, Pelamis Wave Power reported a £8.3 million loss, on top of a £9.7 deficit the previous year. Directors said the company would meet its “foreseeable obligations without further recourse to financial markets.”

In November, Marine Current Turbines (MCT) claimed that the 1.2-MW SeaGen—the world’s first commercial-scale tidal stream device—was in line to produce 7,000 MWh of marine energy per year, far exceeding original predictions of 5,000 MWh. MCT cofounder Peter Fraenkel said that the turbine installed in Strangford Lough in Northern Ireland was running in an extremely aggressive environment (see photo). “It should be remembered it is being driven by a wall of water 27 m deep, similar to the height of the Tower of London, that surges back and forth with every tide through the Strangford Narrows … at speeds of up to 10 miles per hour. We are getting more energy than expected mainly because the resource is more energetic than originally predicted during earlier surveys.” 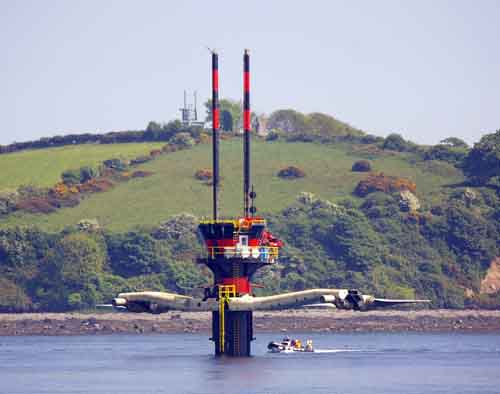 A power surge. The 1.2-MW SeaGen—the world’s first commercial-scale tidal stream device—produces 7,000 MWh of marine energy per year, exceeding predictions of 5,000 MWh. The increase was due to the “aggressive” conditions in Strangford Laugh, a shallow inlet in Northern Ireland where tides gush in at speeds of up to 9 mph. The 37-meter-long device with 16-meter-diameter twin rotors was installed in April 2008. Courtesy: Marine Current Turbines

Meanwhile, innovative prototypes like Aquamarine Power’s giant “Oyster” are gearing up to vie for the government’s developmental funding. Designed to harness kinetic wave energy and turn it into power, the Oyster is being installed on the seabed off the Atlantic shores of the Orkney Islands. This fall, it began demonstration trials to prove the viability of its technology.

In contrast to many other wave power devices, Oyster uses hydraulic technology to transfer wave power to shore, where it is then converted into electricity. “A key design feature is a 18-m-wide oscillator based on fundamental research at Queen’s University Belfast led by Professor Trevor Whittaker using their wave tanks,” explained Dr. Ronan Doherty, Aquamarine’s chief technical officer. The oscillator is fitted with pistons and, when activated by wave action, pumps high-pressure water through a subsea pipeline to the shore. Onshore, conventional hydroelectric generators then convert this high-pressure water into electrical energy (see photo). 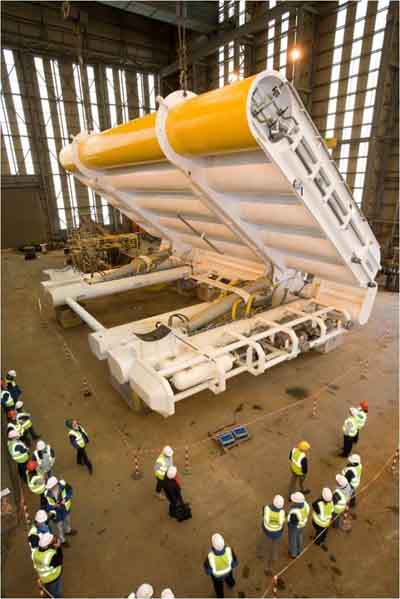 The world and one Oyster. Funding by the UK government to speed up marine energy prototype development through to early-stage commercial generation could spur demonstrations of innovative technologies like Edinburgh-based Aquamarine Power’s giant “Oyster.” Designed to be deployed at near-shore water depths of 12 m to 16 m, the device uses hydraulic technology to transfer wave power to shore. The 18-m-wide oscillator is fitted with pistons, which are activated by wave action and then pump high-pressure water through a subsea pipeline to shore. Conventional hydroelectric generators then convert the water energy to power. Courtesy: Aquamarine Power

Oyster is designed to be deployed at near-shore water depths of 12 m to 16 m to benefit from more consistent seas and narrower directional spread of the waves. The reduced wave height and load enhance survivability and allow a high percentage of annual average power and consistent power delivery. Any excess energy is spilled over the top of the flap, its rotational capacity, allowing it to literally duck under the waves.

Although at an early stage of development, the Oyster concept could have significant potential for use in many locations around the world, the company believes. “Our computer modeling of coastlines suitable for this technology shows that Spain, Portugal, Ireland, and the UK are ideal candidates in Europe,” Doherty said. “But globally there is huge scope in areas like the North West coast of the USA and coastlines off South Africa, Australia, and Chile. We estimate that the potential size of the market could be in excess of £50 billion.”