By the end of this year, U.S. power plants with coal ash surface impoundments could face new federal regulations related to the management of coal ash at their facilities. Currently, there are no federal requirements governing coal ash management because in 2000 the U.S. Environmental Protection Agency (EPA) determined it to be a nonhazardous waste under the federal Resource Conservation and Recovery Act.

Currently, the regulation of utilities’ management of coal ash ponds is left up to the states. Such regulations vary by state. Most states don’t require utilities with coal ash impoundments to have liners or monitors to check on whether any hazardous constituents from the coal ash are leaching into aquifers. Likewise, most states have no standards in place that mandate regular testing of the integrity of the dikes used to contain coal ash slurry in surface impoundments.

However, the December 2008 massive release of coal ash from Tennessee Valley Authority’s (TVA) facility in Kingston, Tenn., promises to move the federal government into a more active role in the management of coal ash. The TVA spill created national headlines and drew the attention of the public and elected officials to utilities’ current management practices related to coal ash. The breach in the TVA coal ash surface impoundment flooded more than 300 acres of land, damaging homes and property. Coal ash from the release flowed into the Emory and Clinch Rivers, filling large areas of the rivers and killing fish. TVA cost estimates for the clean-up range between $525 million and $825 million, which does not include long-term cleanup costs (Figures 1 to 4). 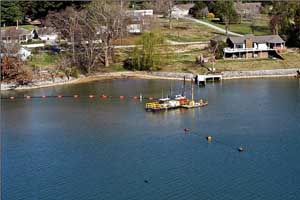 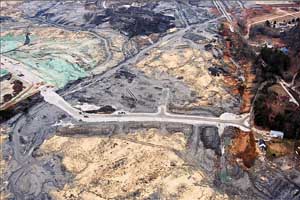 2. Collecting ash. Dike No. 2 construction was nearly complete when this photo was taken in late March. Courtesy: TVA 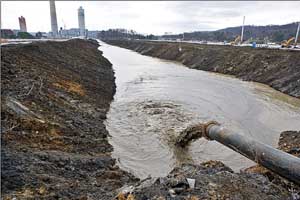 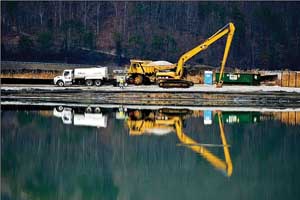 "Environmental disasters like the one last December in Kingston should never happen anywhere in this country," said new EPA Administrator Lisa P. Jackson. "That is why we are announcing several actions to help us properly protect the families who live near these facilities and the places where they live, work, play and learn."

On March 9, the EPA requested that electric utilities that have surface impoundments or similar units provide information about the structural integrity of their units to the agency. The EPA estimates there may be as many as 300 such units throughout the U.S. These information requests are legally enforceable and must be responded to fully. For more information about the letter the agency is sending to utilities, go to www.epa.gov/epawaste/nonhaz/industrial/special/fossil/coalashletter.htm.

The agency will require appropriate remedial action at any facility that is found to pose a risk for potential failure. The assessment and analysis of all such units located at electric utilities in the U.S. will be compiled in a report and made available to the public.

In addition, the EPA is moving forward quickly to develop regulations to address the management of coal combustion residuals. It anticipates having a proposed rule ready for public comment by the end of the year.

Sen. Barbara Boxer (D-Calif.), who chairs the Senate Environment and Public Works Committee, was quick to react to the EPA’s announcement. She has been chairing a committee that has been investigating the TVA spill and environmental issues related to current methods of coal ash management. "The plans EPA Administrator Jackson announced today reflect the measure we included in our Senate resolution last week, and are an important first step toward making sure our families and communities will be protected from toxic coal ash waste in the future," she said.

In March, POWER interviewed Christopher M. Hopkins, senior vice president of aggregates and mining at Saint Consulting. He is based in the company’s Franklin, Tenn., office. Hopkins told us that he recently gave a presentation to the American Coal Council in which he focused on the political issues related to the management of coal ash, especially in the wake of all the negative publicity that resulted from the TVA coal ash spill in December.

He gave his predictions concerning the likelihood that the EPA will enact some national standards in the near future to help prevent large accidental releases of coal ash slurry such as the TVA incident.

"My prediction is that there very well could be [standards]," Hopkins said. "Politics is a science of opportunity; elected officials often latch on to the issue of the day in order to garner publicity. As we saw with the congressional hearings that have already been held regarding the accident in East Tennessee, it would be a natural progression for a congressman or senator to introduce legislation that would place strict restrictions on the industry. The coal industry is a popular target for both environmental groups and anti-mining organizations."

"If there were going to be regulation regarding future ash containment ponds, it would be preferable that it be regulated on a state level," he said. "There is no cookie cutter answer to this issue, and attempting to have the federal government regulate the industry is saying that there is."

"My presentation and recommendations to the American Coal Council were directed towards the political side of the issue of the spill and the politics that surround the industry," he said. "The ramifications of the coal ash containment pond spill will be felt throughout the industry going forward into the future. We live in the Internet age, so opposition groups throughout the world will use the accident in East Tennessee to their advantage. The spill created headlines in newspapers from Knoxville, Tenn., to Seattle, Wash."

Hopkins also shared his opinion of the effect on the coal industry of recent changes in leadership in Washington.

"Overall, the choices could have been a lot worse," he said. "Carol Browner, the new ‘Energy Czar,’ is in a new position created by this administration. Her job is now to coordinate energy and environmental policy of all the other agencies. She is a former EPA administrator and served in that position from 1993 to 2001, which is the longest tenure in history. She has worked for former Vice President Albert Gore in the past and has been called a ‘Gore Protégé.’ This could be an issue for the coal industry if she exerts her wishes upon the other directors and environmental cabinet secretaries."

He pointed out that Jackson, the new head of the EPA, has a reputation in New Jersey as a consensus builder. However, she did encourage New Jersey to institute a moratorium on building coal power plants.

Of Steven Chu, the new energy secretary, Hopkins said: "He is an advocate of shifting away from fossil fuels. He is on record as saying in 2008, ‘my worst nightmare… [is] if the world continues to use coal in the way we’re using it today… that’s a pretty bad dream.’ He has no Washington experience and could be overwhelmed by the Washington culture."

He also addressed the contrast between Chu and Ken Salazar, the new secretary of the interior, concerning their attitudes toward the use of coal to generate energy.

"On January 22, Salazar said, ‘As we move forward into that energy future, it will be important for all of us to understand that our oil, gas, and coal resources are very much a part of the equation of the future,’" Hopkins said. "He is in favor of further expansion of clean coal technology."

The change in political leadership in Congress could also have a strong impact on the coal industry, he said.

"The most interesting recent development in Congress involves Congressman Harry Waxman of California wrestling the chairmanship of the House Energy and Oversight Committee away from former chairman John Dingall of Michigan," said Hopkins. "Waxman is a strong opponent of coal and uranium as fuel sources. He is a strong environmentalist and wants coal-fired power plants to capture and bury all of their ‘greenhouse gases.’ He filed a bill in 2008 that would require just that. He is the one person that should be watched closely by the industry."

Now more than ever, U.S. power plants need to ensure that they are handling their facilities’ coal ash storage properly in order to protect human health and the environment. The EPA’s recent announcement sends a strong signal that in the near future the new administration will probably require utilities to implement much stricter procedures related to the management of coal ash.
—Angela Neville, JD, is POWER’s senior editor.