The unfortunate coal ash spill at the Tennessee Valley Authority’s (TVA’s) Kingston Fossil Plant that occurred on December 22 has heightened national awareness of the problems associated with utilities’ coal ash surface impoundments if they are not properly maintained.

At this time there are no national standards governing the maintenance of coal ash surface impoundments and their retention dikes. The U.S. Environmental Protection Agency (EPA) does not consider the waste "hazardous." Some environmental groups, including the Environmental Integrity Project, argue that even though coal ash is characterized as nonhazardous waste by the EPA, the waste at some facilities has been found to contain harmful metals such as lead and arsenic. In contrast, industry groups have been quick to respond to complaints about the lack of appropriate regulation of coal ash surface impoundments (see sidebar, "Kingston’s King-size Mess").

The ash reservoir rupture that occurred in the early morning hours of December 22, 2008, at Tennessee Valley Authority’s (TVA’s) Kingston Plant released 5.4 million cubic yards of wet coal ash into two sloughs that flow into the Emory River (Figures 1 and 2). The dike rupture certainly qualifies as a terrible accident and a black eye for TVA’s reputation that will take years to heal. TVA’s maintenance and inspection practices will come under close scrutiny, and management will take some political heat. In the meantime, TVA has promised to remove the two million tons of ash waste and restore the affected areas. 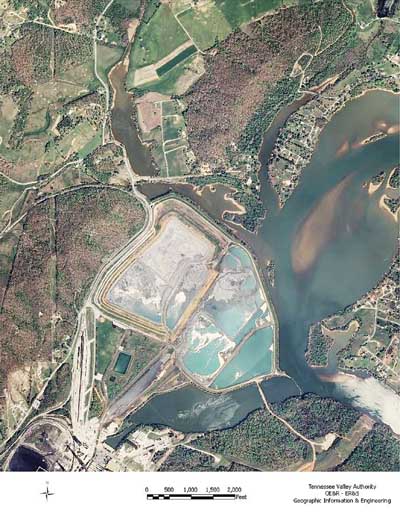 1.    Before. This aerial photograph of the Kingston Plant and surrounding areas was taken prior to the ash slide of December 22, 2008. Source: TVA 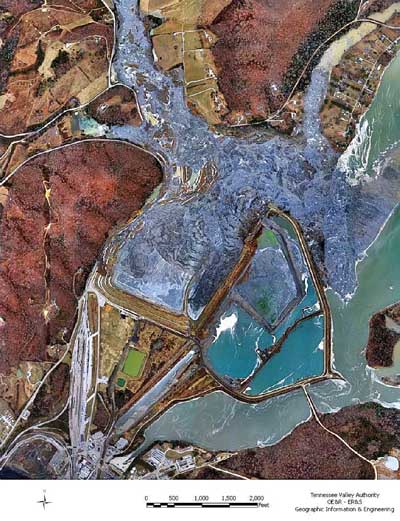 2.    After. This photograph of the same area was taken on December 23, 2008, the day after the earthen containment walls holding more than five million cubic yards fly ash and bottom ash sludge failed. Source: TVA

However, laboratory analysis of the ash wastes debunks the many media reports that were released after the accident that characterized the break as a huge environmental disaster.

The same day as the break, the EPA’s contractor, Tetra Tech, was mobilized. It was the first of several labs to conduct soil and ash sampling of the affected areas. Samples were collected from the surface, a depth of 30 inches, and a vertical core at 52 feet across the flood area.

In sum, laboratory analysis of all the test samples found that the constituents, with one exception, were well below the EPA Region 4 Removal Action Levels (RALs) for residential soil, which are much stricter than industrial limits. In fact, ash testing by a certified, independent laboratory found that the ash constituents were on the order of 10 to 100 times less than the limits that would cause it to be classified as a hazardous waste by the EPA.

Arsenic was the only constituent found in several samples to be at concentrations above residential RALs, but the levels remained well below industrial limits. To put the numbers into their proper perspective, the arsenic concentrations, though above residential RALs, are still within the range of naturally occurring levels in Tennessee soils. Specifically, the arsenic levels were found to range from 45.8 ppm to 81.3 ppm. The residential and industrial RALs are 39 ppm and 177 ppm, respectively. Scotts Winterizer Fall Lawn Fertilizer used to green your yard in the spring has an arsenic concentration of around 57ppm.

"What’s been interesting to me is this fiction that since coal ash is not regulated by EPA as hazardous waste, there’s no regulation at all," said Jim Roewer, executive director of the Utility Solid Waste Activities Group in a recent press release. "That’s simply not true. Many states have very tough programs."

Edison Electric Institute spokesman Dan Riedinger, whose association represents several major U.S. utilities, said in a statement made in January that his group opposes a hazardous waste designation for coal ash but added, "It’s too early to rule out other options that can help utilities improve their management practices and provide the public with the reassurance it needs in the wake of TVA."

Illinois is an example of a state with a regulatory program dealing with the maintenance of coal ash ponds. The Illinois Environmental Protection Agency has inspectors who scrutinize the ponds and landfills where coal ash waste is stored, according to an article published by The Southern Wire Services on January 15. However, despite the requirements, there are no regulations in place in Illinois that stipulate how frequently groundwater near the old, unlined ash ponds must be monitored. Instead, each site is monitored on a "case by case" basis, said Darin LeCrone, a manager in Illinois EPA’s bureau of water permit section.

Southern Company’s coal combustion product (CCP) management practices are in compliance with each state’s unique regulatory scheme, according to a written statement released on February 2 to POWER by Steve Higginbottom, a member of Southern Company’s media relations department. The company’s CCPs are collected as part of the processes to remove pollutants from air emissions so that power plants comply with air quality regulations.

"Southern Company realizes the seriousness of an ash surface impoundment failure and has a robust program in place to ensure the integrity of our containment systems," Higginbottom stated. "In addition to this program, Southern Company is taking action to confirm the integrity of our surface impoundments and to evaluate our CCP management practices.

In 2000, the EPA concluded, after nearly 20 years of study, that coal ash does not warrant hazardous waste regulation under Subtitle C of the Resource Conservation and Recovery Act and that states should continue to be the primary environmental regulators for coal ash management, he pointed out.

CCPs contain trace amounts of metals — such as arsenic, mercury, and lead — that occur naturally in the coal that Southern Company burns to produce electricity, but their concentrations in the ash are not comparable to levels in substances that are required to be regulated as hazardous.

"The states in which we operate have the authority to impose additional restrictions if necessary to protect human health or the environment," Higginbottom said. "Southern Company works closely with each of its state regulatory agencies to ensure that we meet the requirements for environmental protection that the agencies establish. In situations where site specific issues have been a concern, state regulatory agencies assess the site to determine what, if any, additional actions or requirements are needed."

Southern Company will continue to comply with all existing and future state and federal regulatory requirements and is continually seeking to increase beneficial use of CCP that it generates, he emphasized.

Coal ash surface impoundments have successfully been in operation at many of his company’s coal-fired plants for decades, Higginbottom noted. Ash surface impoundments provide a controlled means for containing the solid remains of coal burned to produce electricity, and they represent standard practice across the coal-fired power plant industry. Any discharges from an ash surface impoundment are subject to wastewater permit limits under the Clean Water Act’s National Pollutant Discharge Elimination System, including pollutant limits and monitoring and reporting requirements, which are submitted to the appropriate regulatory agency, typically monthly.

Looking at the Example of SMCRA Practices

If enacted by Congress, the proposed Coal Ash Reclamation and Environmental Safety Act of 2009 (H.R. 493) would impose uniform federal design, engineering, and performance standards on coal ash impoundments to avoid a repeat of the damage done by the Kingston pond breach. The legislation, which requires minimum design and stability standards for all surface impoundments constructed to hold coal ash, draws upon the regulatory model for impoundments that is used for coal slurry management under the Surface Mining Control and Reclamation Act of 1977 (SMCRA).

The majority of coal ash, which is a by-product of the combustion of coal at electric utility power plants, is deposited in impoundments, landfills, or mines. By comparison, coal slurry is one of the main refuse streams from the treatment of raw coal when it is mined.

"For those states that do not already have careful standards for coal ash disposal, my legislation will require immediate attention to the shocking gaps in coal ash management. The American public and our environment simply cannot afford to wait any longer to rein in the hazards posed by the shoddy and irresponsible coal ash disposal practices that currently exist," Rahall said in a press release issued by his office.

Rahall has a long history of working to regulate coal ash waste. In 1980, Rahall and former Representative Tom Bevill of Alabama successfully offered an amendment to what became the Solid Waste Disposal Act of 1980 requiring the EPA to determine how to regulate coal ash. Yet, 29 years later, the agency has chosen not to control how coal ash is stored or used or to classify coal ash waste as hazardous.

A 2006 National Academy of Sciences study initiated at Rahall’s request, along with a 2007 Subcommittee on Energy and Mineral Resources oversight hearing, pointed to the pressing need for a federal regulatory regime governing the disposal of coal ash, whether in impoundments, landfills, or mines.

There is a growing possibility that the EPA will begin regulating coal ash surface impoundments in the near future.

Matthew Hale, who directs the EPA’s solid waste office, said in a statement released in January that, although the agency has yet to issue formal coal ash regulations, "We will be bringing this forward very quickly to reach a decision on the path forward, and that’s the time when we’ll be able to have a timetable. Clearly, the dam failure at TVA puts a sense of urgency on the issue of addressing the stability of the dams."

On Jan. 14, U.S. Sen. Barbara Boxer (D-Calif.), who chairs the Environment and Public Works Committee, asked new EPA Administrator Lisa P. Jackson during her confirmation hearing what she would do to police coal ash ponds and other storage sites that have gone unregulated. During the hearing, Jackson pledged to conduct an immediate inventory of the deposits, if confirmed, and added, "The EPA currently has, and has in the past, assessed its regulatory options, and I think it is time to re-ask those questions."

Whether operating in states with existing coal ash regulations or in states without standards, personnel at U.S. power plants that have coal ash ponds need to ensure that they are properly managing their facilities’ surface impoundments, maintaining the integrity of the retention dikes, and taking strong measures to prevent accidental releases of coal ash waste.