Responding to Democratic calls to bring coal ash impoundments under federal oversight, the Environmental Protection Agency (EPA) has ordered a review of some 300 U.S. utility coal combustion waste sites and said it will develop new regulations to ensure that incidents like December’s colossal coal ash spill in Kingston, Tenn., are not repeated (see photo). 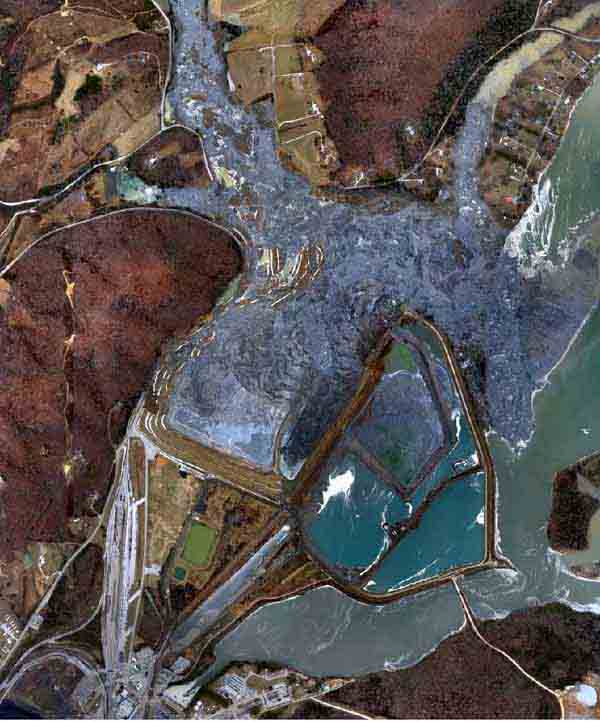 Though the agency declined to say whether its regulations would set national minimum standards for managing such sites, it raised the possibility in February that it might consider regulating coal ash as a hazardous waste—a move that would sharply increase utilities’ costs of managing coal combustion residuals.

The EPA announcement follows the collapse of a retaining wall at an unlined, 40-acre ash pond at the Tennessee Valley Authority’s (TVA’s) Kingston plant December 22, which let loose more than 1 billion gallons of sludge across 300 acres of surrounding land and water, destroying three homes and despoiling nearby streams.

In a statement, EPA Administrator Lisa Jackson said her agency sent letters to relevant utilities requesting information about the structural integrity of their coal ash impoundments; the agency also will review previous assessments of those facilities by state and federal regulators. The EPA said it “will require appropriate remedial action at any facility that is found to pose a risk for potential failure.”

The agency also said it will issue a detailed assessment of U.S. coal ash impoundments and develop a proposed rule for public comment on the matter by the end of the year.

Since the Kingston accident, key congressional Democrats have questioned the efficacy of the existing patchwork of varying state regulations currently governing coal ash impoundments and have urged that such sites be brought under uniform federal management.

In particular, Democrats have challenged previous EPA rulings that toxic residues in coal ash are too small to warrant classifying it as hazardous waste, which would make it subject to the stringent management and disposal requirements set by the Resource Conservation and Recovery Act (RCRA).

Congress directed the EPA in 1980 to make a regulatory determination on whether coal ash was RCRA waste, and the agency ultimately ruled in May 2000 that it was not.

But in a January 13 letter to then-EPA Administrator Stephen Johnson, House Energy and Environment Subcommittee Chairman Edward Markey (D-Mass.) requested Johnson square the agency’s 2000 conclusion with the EPA’s 2007 finding that 63 sites in 23 states were found to have water bodies contaminated by heavy metals found in coal ash.

In a February 18 response to Markey, Acting Assistant EPA Administrator Barry Breen said the agency plans to draw on new data that may change the EPA’s conclusion that coal ash not be regulated as a hazardous waste.

“Since the May 2000 regulatory determination, additional information and data became available, which EPA believed should be noticed for public comment as part of the agency’s evaluation” of coal ash, Breen said.

Breen said that EPA released a draft risk assessment of coal ash that also was subject to peer review and completed in September. That assessment was done under the Bush administration, which was generally opposed to increased environmental regulation.

“EPA is carefully analyzing the approximately 400 comments and recommendations we received . . . and will consider this information as we continue to follow up on the regulatory determination on the management of coal combustion waste in surface impoundments and landfills,” he added.

The latest information from TVA on the Kingston ash slide recovery is available here.