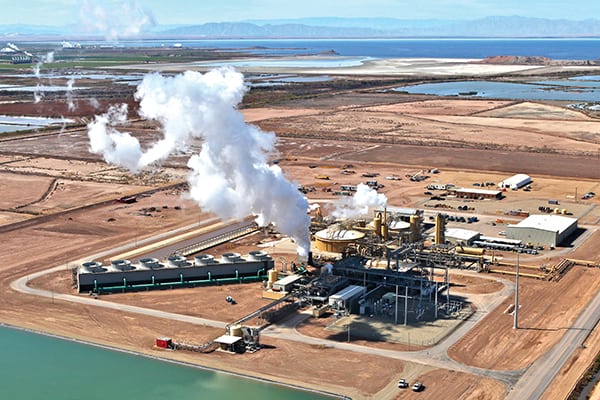 Brine, the waste stream of the geothermal power production cycle, is usually considered a nuisance. High in corrosive minerals, even when reinjected, it’s challenging to manage. So when Simbol Inc. showed it had a way to turn this waste stream into a revenue stream by mining it for high-value minerals like lithium, a lot of people got excited. However, just as this article was going to press, a lot of people got laid off.

Worldwide, the U.S. is the largest producer of geothermal power; however, geothermal energy provides less than 0.5% of total generation in the U.S. Given geothermal’s small piece of the U.S. electricity pie, it may surprise you to learn that the nation is leading the way with breakthrough technology to capitalize on the economical use of valuable constituents found in geothermal wastewater.

From Brine to Mine

Worldwide, geothermal wastewater, the “produced water” or brine, is either disposed of by release to waterways (which may cause adverse environmental effects due to both its constituents and higher temperature) or return to the geothermal reservoir via reinjection wells. Use of this wastewater, when that is an option, falls into two main categories: using the brine’s energy value for a variety of heating purposes and using the brine’s constituent elements. The former is technically simpler. The latter is often called a “cascade” use and has been challenging to commercialize.

In the U.S., federal government funding for geothermal research increased in 2014 and 2015 after a decline in previous years. Though the bulk of those funds (well below what is provided for wind and solar) is directed toward power production, byproduct uses are also considered. They include support for Surprise Valley Electrification Corp., a nonprofit Oregon rural cooperative that has plans for a 3-MW geothermal power plant that will send its waste heat for use by aquaculture, greenhouse heating, and district heating. The Department of Energy (DOE) Geothermal Technologies Office “Vision Study” also includes consideration of low-temperature mineral recovery as an “additive value” proposition. A previous DOE grant (among others) went to a company that has demonstrated such a value-added use of the geothermal process.

In 2010, Simbol Mining Corp. received $3 million from the DOE for a $9.6 million project that was to produce battery chemicals lithium, manganese, and zinc from California’s Salton Sea geothermal reservoir. The company, formed in 2008, licensed technology from Lawrence Livermore National Laboratory. Simbol said, in a presentation for the DOE, that its business model “puts mineral extraction into a separate company, shielding the geothermal operator from risk and letting each company focus on its core competencies.”

Former President and CEO Dr. John Burba was previously technology director at FMC Lithium, where he pioneered selective extraction of lithium from saturated salt brines. (A Simbol representative told POWER on Feb. 5 that Burba was no longer with the company.) By 2013 the Pleasanton, Calif.–based company had demonstrated production of a high-purity lithium hydroxide through the electrolysis method, produced the world’s first battery-grade lithium carbonate from a geothermal brine, and achieved more than 9,000 hours of demonstration plant operation.

Simbol says its proprietary process “eliminates traditional methods of invasive mining or evaporation ponds that require significant land, water, and energy use.” The process is said to produce “virtually zero waste, while consuming CO2, waste water, and other emissions from the geothermal power plant.”

Although the company does not provide details about its process, a January 2013 U.S. Geological Survey (USGS) report on lithium says that it involves utilizing “a unique reverse-osmosis process,” which “eliminates the need for solar evaporation, a crucial and lengthy procedure in common brine operations.”

Commercialization of Simbol’s technology began with a demonstration facility in 2010 and was followed by the opening of what it says is the world’s highest purity lithium carbonate plant in September 2011. At the beginning of this year, the company said it was preparing to break ground on its first commercial lithium plant, which at full capacity, is expected to produce “enough lithium for about 1.6 million plug-in hybrid electric vehicles per year.”

The materials Simbol is extracting from geothermal brine are high-value minerals used in everything from the batteries used to power electronic devices and electric cars to military applications. As worldwide demand grows for these materials, supplies and prices have become a concern, and more countries have begun development of their resources. Worldwide lithium resources, for example, are approximately 39.5 million tons, with 5.5 million tons of that total in the U.S.

According to the USGS, in 2012, Chile and Australia both produced the largest volume of the super-light metal (13,000 metric tons). From 2008 to 2011, the U.S. imported 96% of its lithium from Argentina and Chile. As of 2012, the U.S. had only one commercially active lithium mine, in Nevada, and only 68 people were employed by mine and mill operations.

The Salton Sea area is believed to be the most prolific mineral-rich brine source in the world, which explains why it is an ideal place to commercialize this technology. Other locations may be more restricted to using other geothermal reservoir minerals and gases, depending on market needs for those constituents. (See the web exclusive “New Zealand Strives to Maximize the Value of Geothermal Wastewater,” associated with this issue online, for a look at how New Zealand is exploring these opportunities.)

When Tesla Motors opens what will be the world’s largest battery factory in 2017, in Nevada, it will need lots of battery-grade lithium from a reliable source. Even though Nevada is said to have large lithium deposits, the cost of production is lower in other countries.

The Desert Sun reported on Jan. 15 that Simbol expects full-scale production to begin in 2018; if the first plant finds success, the company said it could eventually build 10 more in the valley, which would have a productive life of 600 years, according to Tracy Sizemore, the company’s vice president of business development. The promise of a high-demand value-added product could boost prospects for additional geothermal energy development in the area.

Simbol believes it can produce these materials at a competitive price, in part because its raw materials source is “a secure, scalable, and sustainable resource base.” The company expects the Salton Sea “will yield many decades of lithium, manganese, and zinc materials securing our critical materials future.”

The Simbol pilot plant is co-located with the John L. Featherstone Geothermal Power Plant shown in the header photo (formerly known as Hudson Ranch 1) in California’s Imperial Valley. When the 49-MW plant, owned and operated by EnergySource, went into commercial operation in March 2012, it was the first stand-alone geothermal plant to go online in the Salton Sea area in 20 years. Power from Featherstone is sold to Salt River Project, an Arizona public power and irrigation district.

The Simbol Minerals extraction plant will use Featherstone’s spent, but still warm brine as a feedstock, before it is reinjected into the reservoir. By extracting the corrosive minerals that are the bane of geothermal plants everywhere, before the brine is reinjected into the reservoir, Simbol would help the power plant minimize pipe damage. (This article was written Feb. 1. When I contacted several Simbol executives over the following week, they did not respond to POWER’ s requests for information about any leasing, revenue share, or other financial details of the partnership with EnergySource.)

To support the Simbol plant’s expected demand for about 200,000 MWh per year, the Imperial Irrigation District has said it is considering plans to build a natural gas–fired plant next to the lithium plant. The minerals plant is also expected to use roughly 2,400 acre-feet of water each year, which would come from the Colorado River via the All-American Canal.

The New York Times reported last spring that from 2011 to March 2014, Simbol’s pilot plant had extracted about 100 metric tons of lithium from the Featherstone plant’s brine. As the Times noted, another benefit of colocation is that geothermal companies have an exemption from water laws that allows them to pump their brine back into the ground. That exempts Simbol from any future potential cleanup or environmental mitigation costs.

More recently, on Jan. 15, The Desert Sun reported that construction of the large-scale, commercial plant is expected to employ “400 people during an 18-month construction period and between 120 and 150 people once finished. Many of those high-wage jobs could go to residents of the Imperial Valley, one of the state’s most impoverished areas.”

From Boon to Bust

Then, on Feb. 3, local news sources started reporting that Simbol had fired the majority of its employees the previous week. Chief Financial Officer Pete Sunada told The Desert Sun that the company can produce the high-quality lithium, as advertised, but that there wasn’t enough funding to build the full-scale extraction plant, so it didn’t make sense to keep so many employees on the payroll. When I spoke very briefly with Sunada on Feb. 4, he sounded flustered but did not share information about the layoffs.

The local paper said Sunada “insisted the company still plans to build the full-scale plant” and that executives are “actively in talks” with a group interested in purchasing a majority stake. Others, including EnergySource CEO Dave Watston, are more skeptical. Watson told the paper that even though the two companies had settled on terms for brine use in 2014, he hadn’t heard from Simbol since December.

Nevertheless, EnergySource isn’t writing off the technology. Watson was quoted as saying, “We do feel very confident that this technology will be picked back up at some point in the not-very-distant future. It really needs good management, and the focus was on all the wrong things (at Simbol).”

Developing game-changing technologies, especially in the energy space, is just the first step. Taking the much bigger leap of securing sufficient start-up capital to prove the technology’s commercial feasibility has been the downfall of many enterprises. Whether Simbol’s name is added to that list remains to be seen. ■