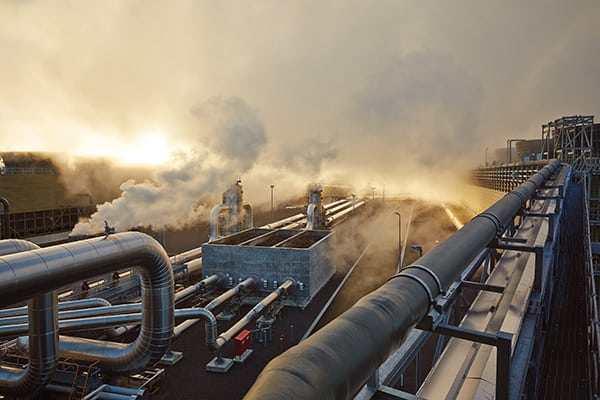 Using the heat from geothermal discharge water, or brine, is just one way to maximize the value of this “waste” stream. New Zealand, a geothermal energy leader, also is pursuing mineral extraction from brine to increase overall profitability of the sector.

Geothermal resources have important strategic value for New Zealand, as they are able to directly supply both heat and electricity (see “New Zealand Geothermal Industry Is Poised for the Future” in this issue). But the lifeblood of the process, water, while not entirely ignored in the commercial equation, may have more to offer in the end game. The composition and volume of geothermal fluids—aside from their role in supplying heat and/or electricity—offer considerable potential for the extraction of various metals and minerals. But developers face some tough obstacles along the way.

Among them is the question of legal ownership of such resources, which are heated as they travel through deep geological formations, interacting with the rocks and becoming increasingly saturated with various minerals and metals that could be saleable products.

This is the subject of an in-depth study by University of Waikato law professor Barry Barton who has been looking at the rights to ownership of minerals found in geothermal fluids. New Zealand law on the matter is unclear, and various claims can be made to the minerals under different legislation and different rules of law. Barton has been examining the different possibilities under the current law, and part of his brief is to consider desirable law reform in order to provide clarification. The New Zealand Ministry of Business, Innovation and Employment has commissioned the academic as part of a two-year NZ$400,000 (US$290,000) GNS Science project, “From Waste to Wealth: Commercial Recovery of Products from Geothermal Fluids.”

“New ways of looking at our resources may improve the efficiency of our use of them, and improve the environmental outcomes,” says Barton. But the issue has sparked controversy among various stakeholders.

The two-year GNS study, headed by Dr. Ed Mroczek, aims to develop practical ways to extract high-value constituents from geothermal fluids and will consider the viability of extracting gases and dissolved minerals (such as lithium, silver, and gold) from geothermal brine and steam. Mroczek says one of the areas with great potential is the extraction of lithium from thermal waters, which has application for use in batteries, glass products, and lightweight alloys.

Rather than injecting “waste” fluids from geothermal power stations back into the ground, the project team hopes to support the realization of commercial value from these waste products and make geothermal energy generation and related industries more sustainable.

Researchers are assessing opportunities and barriers to investment, and attempting to identify simple, cost-effective processing technologies for mineral extraction. It is hoped the outcomes will provide greater understanding of the economic viability, market drivers, and regulatory framework likely to influence the successful implementation of the technologies needed to add value to geothermal industry processes. The interdisciplinary team has expertise in chemistry, process engineering, materials, law, marketing, economics, and financial modeling. The program is supported by geothermal production companies, regional councils, Maori trusts, regional development groups, and other industries.

Mroczek explains that recent industry- and government-funded research in New Zealand has been directed at remediation and treatment of geothermal waters. This has included testing and development of processes for:

One of the challenges facing GNS researchers is that there is no sufficiently detailed body of knowledge concerning the chemical composition of New Zealand’s production geothermal fluids to inform an estimate of the economic mineral recovery potential. Their research project is primarily focused on a technology review that includes silica and lithium, as well as other compounds present in the geothermal fluid: boron, precious metals, iodine, carbon dioxide, and helium.

In New Zealand, mineral and metal recovery is most feasible either by, or in partnership with, geothermal energy development, for both practical and economic reasons, says Mroczek. Geothermal plants are already permitted and are experienced in pumping, processing, handling, and disposing of geothermal fluids. “Mineral extraction would most likely consist of an additional treatment step added to existing plant facilities,” he told POWER.

Silica is one of the potentially most valuable minerals, being a marketable commodity with a wide range of uses, including glass manufacture, foundries, building products, and chemicals. However, the value and price for silica varies widely. Precipitated and colloidal silicas, which could be produced from geothermal fluids, are part of the specialty silica market, worth US$1.3 billion and growing over 5% annually, according to market research firm Freedonia. This market includes cosmetics and toiletries, chemicals, rubber, coatings and inks, plus electrical and electronic equipment. The revenue stream from silica from a 50-MWe geothermal plant could provide US$10 million to $12 million per year, according to one estimate.

Lithium is the other primary mineral of interest. Internationally, earlier investigations into the recoverability of lithium faltered and were mostly dropped. More recently, lithium has increased in economic value. The expected annual growth rate between 2011 and 2025 from existing market applications is put at 7%, with an annual maximum rate as high as 10%, depending on the demand of the electronic and transportation industries. Recently, a U.S. company, Simbol Inc., developed a process for extracting lithium, manganese, and zinc from brine (see “Mining for Lithium in Geothermal Brine: Promising but Pricey” in the March 2015 issue).

Aside from any possible commercial exploitation of silica from process streams, there are additional benefits to the plant from silica removal. “Silica is one of the biggest ‘problem’ minerals in geothermal energy production,” explained Mroczek. Removing silica would lower operating and maintenance (O&M) costs, through reduced scaling of pipes, and would increase energy extraction, thus enabling more cost-competitive electricity. This alone could lead to millions of saved dollars for fewer production and injection wells, plus increased production efficiency.

Mineral extraction from geothermal brines in New Zealand and many other areas faces a number of barriers, including:

In New Zealand, geothermal resources are treated as water and are covered by broad environmental management legislation, in particular the Resource Management Act 1991. So the New Zealand geothermal community believes it is imperative to explore the legitimacy of minerals extraction and any ownership issues.

Although mineral extraction presents tantalizing but complicated prospects for the future, New Zealand already has made successful use of waste streams.

Water Reuse. When it was built, in 1958, Wairakei Power Station (Figure 1) used a cooling system that relied on drawing water from the Waikato River, mixing it with steam condensate that had been used to power the turbines, and then discharging that stream of cooling water back to the river. This resulted in some adverse effects for the Waikato River, including the discharge of warmer water and geothermal trace elements.

Contact Energy’s Wairakei plant manager explains that a more recent, adjacent binary plant provides greater output from the same amount of geothermal energy. “The plant utilises ‘waste’ geothermal energy to generate electricity. Geothermal fluid from the resource is separated at surface into dry steam at various pressures, and this powers the main plants using condensing turbines and separated geothermal water [SGW]. The SGW is still at about 130 degrees C. This heat is used to drive the binary plant, generating on average an extra 12 MW from SGW that would have been discharged in the past.”

Contact Energy owns the Wairakei Geothermal Power Station situated adjacent to the park, and the prawn farm has an arrangement to make use of discharge water from the station. Discharge from the Ormat binary plant sits between 96C and 98C with a flow rate of 450 metric tons per hour in winter, when nighttime ambient temperatures may fall to –2C. Wastewater from the plant provides sufficient low-cost and environmentally friendly heated water to the plant all year round.

The geothermal fluid is passed through a heat exchanger to heat water for grow-out ponds and tanks in the hatchery and nursery as part of the process of growing prawns for the onsite restaurant.

The park has 11 prawn production ponds and two dedicated prawn fishing ponds that remain between 27C and 31C. The design for the park was completed in-house, with engineers only required for the initial stages of building the system. A small staff maintains the system, which supplies a sustainable and eco-friendly 7.8 metric tons per year of prawns to the park’s restaurant from 2.75 hectares of ponds.

With resource consent to use discharge water from Contact Energy until 2026, the Huka Prawn Park looks set to continue to supply prawns to its busy restaurant for years to come, and low-temperature geothermal earth energy will prolong the attraction’s cost-effective energy supply. ■

— Chris Webb (www.bluegnumediasolutions.com) is a freelance journalist based in Auckland, New Zealand.