On January 8, 2007, a hydrogen explosion at the Muskingum River Power Plant’s 585-MW coal-fired supercritical Unit 5 caused one fatality, injuries to 10 other people, and significant damage to several buildings. The explosion occurred during a routine delivery of hydrogen when a hydrogen relief device failed, which allowed the contents of the hydrogen tank to escape and be ignited by an unknown source. This article covers the findings of the incident investigation and the actions the plant has taken to prevent a reoccurrence.

The explosion at Muskingum River Power Plant underscores the importance of implementing safe equipment design and construction as well as proper procedures for handling hydrogen in order to prevent the loss of life and property at power plants.

The plant, owned by Ohio Power Co., a subsidiary of American Electric Power Co. Inc. (AEP), is located on the west bank of the Muskingum River near Beverly, Ohio. The plant’s Unit 5 has been in service since 1968. Prior to this incident, the plant had a long history of strong safety compliance.

In March, POWER interviewed Kenny McCullough, director of safety and health in AEP’s generation division. He discussed the findings of the company’s investigation into the explosion and the actions the company has taken to ensure that hydrogen will be handled safely at the plant in the future (Figure 1). 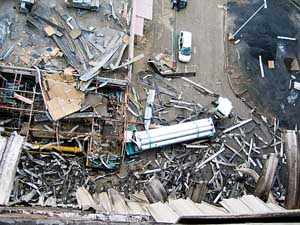 1.    A somber scene. A hydrogen delivery truck is surrounded by debris from the explosion at Muskingum River Power Plant’s Unit 5. During delivery, a hydrogen relief device failed, permitting the contents of the hydrogen tank in question to relieve and be ignited by an unknown source. Courtesy: American Electric Power

Background to the Explosion

Hydrogen is used at the Muskingum River plant to cool the unit generators, McCullough explained. He described the standard operating procedures for the delivery of hydrogen to Unit 5.

"After checking in with the plant security, the vendor’s driver had sole responsibility for the task of unloading the hydrogen," he said. "The vendor delivered hydrogen approximately once or twice a week and had a blanket contract for hydrogen at the plant for many years." McCullough characterized the vendor as "a self-described ‘expert at designing, building and safely operating gaseous hydrogen plants,’ [that] provided its own procedures for unloading hydrogen."

Despite the routine use of hydrogen at the plant, plant personnel still had to use caution handling the substance because of its inherently hazardous properties (see sidebar). Hydrogen is the lightest element and is highly flammable.

Hydrogen is no more or less dangerous than other flammable materials, including gasoline and natural gas, according to a fact sheet about hydrogen safety jointly published by the Hydrogen Association and the U.S. Department of Energy’s Office of Energy Efficiency and Renewable Energy. In fact, some of hydrogen’s differences actually provide safety benefits compared with gasoline or other fuels. However, all flammable materials must be handled responsibly. Like gasoline and natural gas, hydrogen is flammable and can behave dangerously under specific conditions. Nonetheless, hydrogen can be handled safely when simple guidelines are observed and the user has an understanding of its behavior.

Comparison with Other Flammable Materials

Hydrogen is lighter than air and diffuses rapidly — 3.8 times faster than natural gas — which means that when released, it dilutes quickly into a nonflammable concentration.

Hydrogen rises two times faster than helium and six times faster than natural gas at a speed of almost 45 mph (65.6 feet/second). Therefore, unless a roof, a poorly ventilated room, or some other structure contains the rising gas, the laws of physics prevent hydrogen from lingering near a leak (or near people using hydrogen-filled equipment). Simply stated, to become a fire hazard, hydrogen must first be confined; however, because hydrogen is the lightest element in the universe, it is very difficult to confine. Industry takes these properties into account when designing structures in which hydrogen will be used. The designs help hydrogen escape up and away from the user in case of an unexpected release.

Hydrogen is odorless, colorless, and tasteless, so human senses won’t detect a leak. However, given hydrogen’s tendency to rise quickly, a hydrogen leak indoors would briefly collect on the ceiling and eventually move toward the corners. For that and other reasons, industry often uses hydrogen sensors to help detect hydrogen leaks and has maintained a high safety record using them for decades.

Hydrogen combustion primarily produces heat and water. Due to the absence of carbon and the presence of heat-absorbing water vapor created when hydrogen burns, a hydrogen fire has significantly less radiant heat compared with a hydrocarbon fire. Because a hydrogen fire emits low levels of heat near the flame (the flame itself is just as hot), the risk of secondary fires is lower.

Like any flammable substance, hydrogen can combust. But hydrogen’s buoyancy, diffusivity, and small molecular size make it difficult to contain and create a combustible situation. In order for a hydrogen fire to occur, an adequate concentration of hydrogen, the presence of an ignition source, and the right amount of oxidizer (like oxygen) must be present at the same time.

An explosion cannot occur in a tank or any contained location that contains only hydrogen. An oxidizer such as oxygen must be present in a concentration of at least 10% pure oxygen or 41% air. Hydrogen can be explosive at concentrations of 18.3% to 59%. Although this range is wide, it is important to remember that gasoline can present a greater danger than hydrogen because the potential for explosion occurs with gasoline at much lower concentrations: 1.1% to 3.3%. Furthermore, there is very little likelihood that hydrogen will explode in open air due to its tendency to rise quickly. This is the opposite of what we find for heavier gases such as propane or gasoline fumes, which hover near the ground, creating a greater danger for explosion.

With the exception of oxygen, any gas can cause asphyxiation. In most scenarios, hydrogen’s buoyancy and diffusivity make hydrogen unlikely to be confined where asphyxiation might occur.

Hydrogen is nontoxic and nonpoisonous. It will not contaminate groundwater (it’s a gas under normal atmospheric conditions), nor will a release of hydrogen contribute to atmospheric pollution. Hydrogen does not create "fumes."

More safety information about hydrogen can be found at the following websites: www.hydrogensafety.info and www.hydrogenassociation.org.

McCullough explained what happened when the explosion occurred on January 8, 2007.

"A hydrogen relief device failed, permitting the contents of the hydrogen tank in question to be relieved and be ignited by an unknown source," he said. "The explosion fatally injured the vendor’s driver and also injured 10 others who had been working nearby. The explosion caused significant damage to the unit’s service building, turbine room, and steam generator building" (Figure 2). 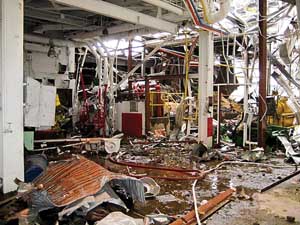 2.    Amid the wreckage. The building housing Muskingum River Power Plant’s Unit 5 was significantly damaged by the explosion that occurred when hydrogen, used to cool generating units at the plant, was being delivered. Courtesy: American Electric Power

McCullough noted that "Ohio Power Co. accident responders and first aid workers responded immediately to the scene to fight the fire and attend to the injured." Local fire department and emergency medical technicians also quickly responded to the incident and assisted with emergency response and evacuation actions (Figures 3 and 4). 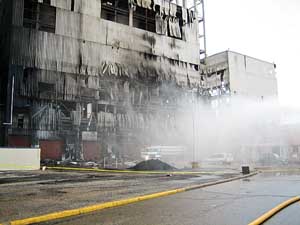 3.    Cooling things down. Water from fire hoses sprays on a hydrogen delivery truck and the surrounding area to keep the area cool after the explosion. Courtesy: American Electric Power 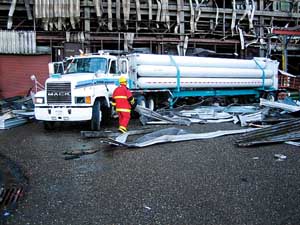 4.    A prompt response. A fireman walks through debris near a hydrogen delivery truck after the explosion. The local fire department arrived quickly on the scene to assist the other emergency response teams in fighting the fire and aiding injured workers. Courtesy: American Electric Power

Investigation of the Incident

In the aftermath of the incident at the Muskingum River Power Plant, AEP personnel conducted their own examination into the cause of the explosion. Due to the fatality and the injuries sustained by workers at the facility, the U.S. Occupational Safety and Health Administration (OSHA) also conducted an investigation that included all parties involved in the incident.

"The investigation into this event showed that the relief device was a rupture disc that normally would have been built to relieve pressure to prevent catastrophic failure of the hydrogen tanks," McCullough said. "Normally, the device has a fusible bismuth plug that holds the coin-shaped disc in place until temperatures exceed 180 degrees. The device had been replaced by the hydrogen vendor several months prior, when the vendor was on-site to make repairs related to an apparent leak. The replacement relief device assembly did not have a fusible plug to support the disc."

When the rupture disc failed, the disc, or a piece of fusible plug left in the vent pipe during the replacement several months prior to the explosion, penetrated a bend in the piping, permitting the hydrogen to vent lower down in the area of the tanks as well as up the normal vent path, McCullough explained.

OSHA brought enforcement actions against the involved entities as a result of the findings from its investigation of the incident. Those actions initially consisted of 18 citations, nine each against the hydrogen vendor and Ohio Power Co. After an informal conference, the number of citations against each company was reduced to eight. Most of the citations were directed at the design and construction of the hydrogen system.

After the incident, AEP took corrective actions to guard against future problems related to the handling of hydrogen at the plant.

The hydrogen vendor was restricted to delivering only 2,100-psi hydrogen to the site (versus the typical 2,400 psi), and the vendors’ employees are now under observation by AEP employees using a defined procedure, the Job Hazard Analysis and Job Safety Assessment Checklist, McCullough explained.

AEP has made other changes in plant operations to further ensure that no more hazardous incidents occur at the facility. "In addition to the procedure changes, the hydrogen system was redesigned and rebuilt to eliminate the use of rupture disc – style relief devices," he said. "Now a relief valve system is used that will reset once pressures have been reduced. The cylinders have been moved away from spaces occupied by people, and the structure is protected from vehicle encroachment and ignition sources."

In September 2005, a working group with CIGRE (International Council on Large Electric Systems) estimated that there may be more than 40,000 hydrogen-cooled generators in service around the world. Despite the large number of systems that use pressurized hydrogen to cool generators, for the most part, few incidents or problems occur. However, given the inherently hazardous properties of hydrogen, plant staff working with this flammable material need to regularly review both the equipment and handling procedures to verify that there are no problems.

This case history is intended to be helpful to personnel who deal with hydrogen used to cool the generators at their power plants. Proper management, including safe equipment design and construction and correct procedures for handling hazardous materials, can ensure safe results in dealing with this useful substance.
—Angela Neville, JD, is POWER’s senior editor.