About two years ago, Jeff Gremelspacher —then chief chemist at Cardinal Generating Station in Brilliant, Ohio—was asked to evaluate potential replacements for the chlorine gas disinfectant system serving Units 1 and 2. The system was used to prevent the formation of microorganisms in the Ohio River water pumped through thousands of 1-inch-diameter cooling tubes in the 600-MW unit’s steam condensers. Unit 1 (Figure 1) is owned by American Electric Power (AEP); Units 2 and 3 are owned by Buckeye Power, a generation and transmission cooperative established by Ohio’s rural electric co-ops. Cardinal Operating Co., co-owned by AEP and Buckeye Power, operates all three units of Cardinal Generating Station. 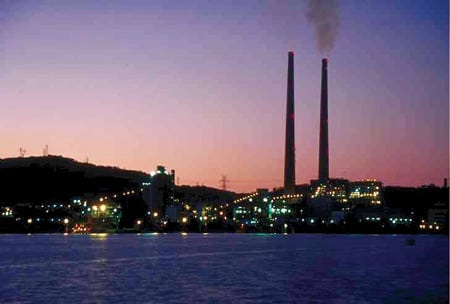 Chlorinating cooling water improves the efficiency of the cooling process. Without chlorination, microorganisms introduced with the water source would accumulate rapidly on the inner surfaces of condenser tubes. They excrete a sticky organic material that can coat the tubes, trapping inorganic matter such as dirt or sand particles and leading to the formation of slime. Gremelspacher explained that slime can reduce the efficiency of heat transfer and steam condensation in as few as 10 days, with potentially costly consequences.

"When condensation efficiency is reduced," said Gremelspacher, "the result is a slight increase in backpressure from the turbines. An increase in backpressure of, say, 0.1 inches Hg or a fraction of a psi may not seem like much, but any loss of condenser vacuum means that more Btus of fuel are needed to produce the same output. Because compensating for every 0.1 inch loss in condenser vacuum requires an additional 25 Btus, we’ve calculated that operating our unit with that pressure differential would raise our annual fuel bill by $250,000."

Although the chlorination system was working properly for Units 1 and 2, "Everyone was aware of increasing concerns about using gaseous chlorine," said Gremelspacher. This included "everything from hazardous materials planning and storage to personnel safety and the rising costs of routine maintenance."

Power plants and factories worldwide have found chlorination a very effective and inexpensive way to disinfect cooling water. However, safety concerns have led to tighter regulation of the storage and use of chlorine gas (see box) and have created demand for alternative liquid chlorinating agents, such as sodium hypochlorite (NaOCl).

Power plants and other industrial facilities have used chlorine as a disinfectant for decades. However, according to Tony Callery, U.S. manager for Portacel Inc., growing concerns about the safety of storing the compound in gaseous or liquid form have driven governments to regulate its use more tightly and users to demand lower-risk but equally effective disinfection alternatives.

If chlorine leaks to the atmosphere, it can expand rapidly into a low-lying cloud that crowds out oxygen. If exposed to moisture from the atmosphere or from the membranes that protect the eyes, lungs, and throats of mammals, chlorine can be converted to hydrochloric acid, a dangerous and destructive tissue irritant.

At AEP, a single regulatory requirement ultimately tipped the scale in favor of a new system. "The trigger for our decision was a new Ohio state rule that chlorine gas users have to create a hazard management and communications program," Gremelspacher explained. "While we certainly have the ability to develop such a program, doing so wouldn’t be our first choice. Public discussions of worst-case scenarios and gas clouds would be too time-consuming and fraught with image problems."

With a background in chemistry and experience in plant operations, Gremelspacher was already aware of the availability of systems designed to chlorinate water using dilute liquid NaOCl, or "hypo," rather than chlorine gas. These systems, pioneered in the UK and now being adopted in the U.S., first proved their worth in the disinfection of municipal drinking water systems.

An aqueous solution, NaOCl is less hazardous and easier to store and handle than chlorine gas, though it requires a larger overall storage space. Although commercial-grade NaOCl is sometimes mistakenly compared to household bleach, it is not. Hypo is a corrosive, caustic, and unstable material that requires careful handling and storage. If the special requirements of this compound are considered during the early design of a plant cooling water system, the result can be a disinfection system that is safer and that costs as much as 50% less than a traditional system.

There are two types of sodium hypochlorite dosing systems: pump-driven and vacuum-driven. Regardless of which type he chose, Gremelspacher knew that making the switch on Units 1 and 2 would require buying and installing the following new hardware:

On the "software" side of the project, Gremelspacher realized that he also would need to develop a monitoring strategy to ensure that chlorination complies with State of Ohio requirements. As he compared the pros and cons of pump-driven and vacuum-driven dosing, Gremelspacher’s decision took shape.

"A pump-driven system can be very accurate, but only if it is located close to the storage tank," he explained. "For our application, that would have meant placing a 6,000-gallon NaOCl storage tank inside an operating power plant. The potential for problems with odors and spills during loading or unloading the liquid would have been too great. What’s more, because a pump-based system requires the hypo solution to be under pressure, leaks would be both more frequent and more troublesome."

Gremelspacher found that the vacuum dosing schemes favored by vendors were similar to the one used by the gaseous chlorine system to be replaced (Figure 2). An induction mixer, or inductor, exposed to water flow produces a vacuum via the Venturi effect, drawing NaOCl solution through the dosing system. Aided by this vacuum, the slight head pressure provided by the hypo storage tank can move the hypo relatively long distances to the point of use. The amount of hypo delivered is governed by the position of a variable-flow valve, with a vacuum regulator controlling the inductor’s open and close cycles. In the event of a downstream failure, the vacuum regulator automatically closes the inductor, cutting off the vacuum and halting the flow of NaOCl solution.

2. Simple process. The storage tank in the upper left holds "neat" (12% to 15%) liquid sodium hypochlorite (hypo). When the feedwater solenoid valve opens, the flow of carrier water opens a vacuum inductor that draws NaOCl into the system. A precise amount of hypo is injected by Portacel Trent vacuum dosers. At the induction point, the NaOCl is mixed with the carrier water, forming a solution that is piped hundreds of feet through existing plastic-lined metal piping to the suction of each unit’s 400,000-gpm circulating water pumps. At the end of each chlorination cycle, the system is purged with fresh water. Source: American Electric Power

The importance of this "fail-soft" safety aspect wasn’t lost on Gremelspacher. "The beauty of the vacuum system is that you’re operating under very low pressure. Basically, you’ve only got head pressure from the hypo storage tank on the suction side of the injector. You’re also under vacuum, so, if something breaks, you aren’t going to see the kind of leakage problems you would see in a pressurized system."

By following a few design rules suggested by Portacel Inc. (www.portacel.co.uk), the maker of the system, "we found that we could put a lot of the process outside," said Gremelspacher. Placing the sodium hypochlorite storage tank (Figure 3), water feed lines, and injector (Figure 4) outside eliminated any risk of exposure to "neat" hypo within the plant. Only dilute solution would flow through the unit’s circulating water pumps. The feed lines are purged with fresh water after each treatment. 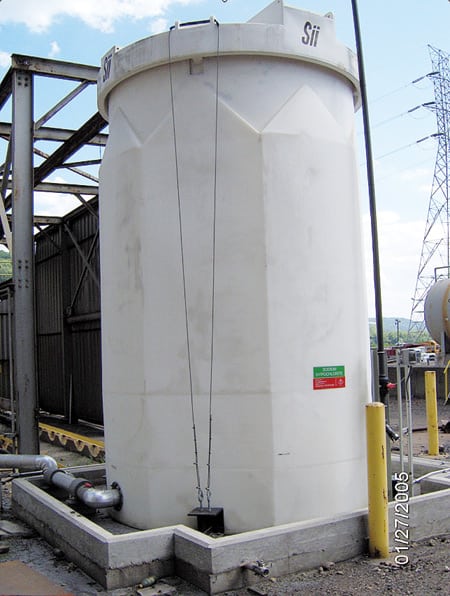 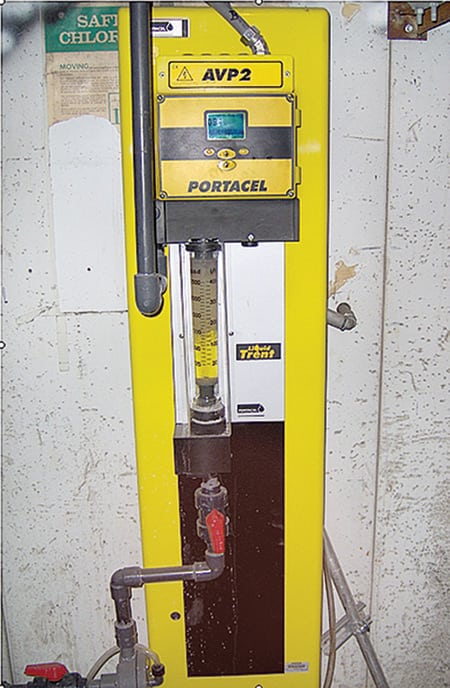 4. Metering to the max. This Portacel Trent automatic vacuum feeder (one of two that serve Units 1 and 2) dispenses and precisely meters dosages of dilute sodium hypochlorite into the unit’s cooling water. Flow of the disinfectant is triggered by the flow of carrier water at the beginning of a treatment cycle. Courtesy: American Electric Power

Major cost savings were achieved when Gremelspacher determined that he could reuse much of the existing system’s piping. "I didn’t want to run PVC pipe through the plant, because I was afraid someone would hit it and break it open. I realized that the original plastic-lined metal pipes could provide the level of corrosion resistance required. Fortunately, we found that there was plenty of life left in them," he said. "Mixing pure water with the hypo, right before the injector, enabled us to use the entire existing downstream piping system, and that really cut our costs."

In the nine months since installation, the system has worked flawlessly, Gremelspacher reports. By law, Cardinal Generating Station can chlorinate its cooling water no more than one hour per day per generating unit, and the total residual chlorine level returned to the Ohio River must be 0.2 ppm or less. In practice, Units 1 and 2 conduct three 20-minute chlorination treatments each day. At day’s end, about 50 gallons of neat hypo have been diluted and injected into about 1,200 gallons of carrier water.

Maintenance of the new NaOCl system is easy and fast, requiring about 10 minutes per day. "After we dose at the required rate, we check the inlet legs, as well as the pumps’ discharge to the river, to make sure that the chlorine residuals are where they need to be," said Gremelspacher. "We may dial it up or back a bit to ensure that we get the chlorination we need, yet stay within our [National Pollutant Discharge Elimination System] limits."

—Tony Callery is U.S. manager for Portacel Inc., Advanced Water Technologies, ITT Industries. He can be reached at 281-363-2091 or tony.callery@ITT.com.