That clearly indicates that developers in New England’s wholesale market “are looking to take advantage of state incentives, declining technology costs, and revenues from wholesale markets,” ISO-NE President and CEO Gordon van Welie said at a press briefing on March 6.

At the briefing, which focused on the grid operator’s recently released 2020 Regional Electricity Outlook, van Welie noted that though “most of these projects are some years away,” the bulk of the proposals—about 14.3 GW—were for wind projects, and about 13.5 GW of these alone were for offshore proposals in Massachusetts, Rhode Island, Connecticut, and Maine.

Solar and battery storage ranked second and third in the queue, surpassing natural gas, driven by technological advances, falling costs, support from the states, and changes to the markets that he said have enabled storage participation. Since 2015, he noted, about 20 MW of grid-scale battery storage projects have come online, but the queue has more than 2.3 GW of new stand-alone storage projects. 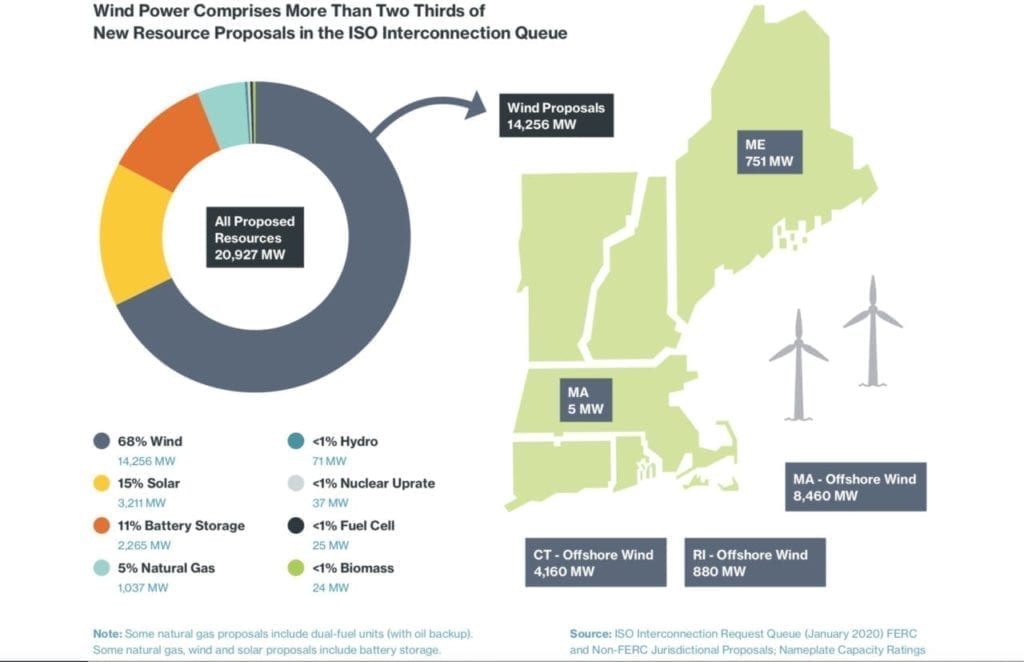 In contrast, since 2013, about 7 GW of mostly coal, oil, and nuclear generation in New England have retired or announced retirement. Today another 5 GW of oil and coal only durn during peak demand or periods of gas pipeline constraints—and are “likely to retire soon,” the report says. Only two nuclear plants—Millstone and Seabrook, both propped up with state efforts—remain open, supplying about a quarter of the region’s power.

Van Welie lauded the competitive market’s impact on the New England’s reliability since the region restructured its power sector in the late 1990s, noting that it thrives on the “principle that a reliable supply of competitively priced electricity is fundamental to a thriving society and economy.” The overarching policy goals of introducing wholesale competitive markets “were to lower costs, encourage innovation, and shield consumers from unwise investments,” and by all measures, the 1997-established ISO-NE had achieved these measures, he said. “The result has been lower wholesale electricity prices, reduced carbon emissions, and a grid and marketplace ready to transition to an even lower-carbon system.”

To accommodate the evolving market, ISO-NE has worked “steadily and intensively” to integrate “high levels of energy efficiency, demand-response resources, energy storage, wind, and solar into our system operations, wholesale electricity market design, and power system planning.” Among efforts it has launched are the introduction of negative market pricing, full integration of demand-response in the electric energy and reserve market—becoming “the first grid operator in the nation to do so,” van Welie noted—and introducing enhanced rules for energy storage, both for charging and discharging.

But recognizing state initiatives, ISO-NE has also sought to establish a route for subsidized renewable resources to enter the capacity market. “These resources are compensated largely through contracts and are less dependent on wholesale market revenues,” he said. “This has created an inherent market design tension because other needed resources rely only on market revenue.”

While ISO-NE “respects the environmental policy objectives of the New England states,” the entity is convinced that a “strong, competitive wholesale market provides the best structure for achieving those objectives,” he said. “It is cost-effective, ensures system reliability, and does not expose consumers to the risks of long-term contracts.”

Echoing representatives of other organized markets besieged by state mandates, van Welie suggested that the “simplest, easiest, and most efficient way” to ease this tension is to introduce carbon pricing through state or federal policy, including through the existing Regional Greenhouse Gas Initiative (RGGI) structure.

“In general, putting a realistic price on carbon emissions would raise energy market revenues,” he said. “It will favor the operation of resources that reduce carbon emissions, and drive the clean energy transition desired by the states. At the same time, it would improve the overall efficacy of the existing market structure. Carbon pricing has the potential to be a solution that is relatively seamless in implementation, yet effective in helping states meet their renewable energy and carbon reduction goals.”

Yet, to date, no “regional consensus” has been reached on that approach. RGGI, for example, “hasn’t really produced a material carbon price in terms of the clean energy transition,” he said.

That’s why ISO-NE will “continue to work with the states and industry stakeholders to determine if there are other adjustments to the current markets, or other market design solutions, that will achieve the same policy objectives.”

The issue is growing more urgent, van Welie suggested, noting that last year, the New England States Committee on Electricity, the New England Power Generators Association, and other participants asked the grid entity to dedicate time and staffing to “discuss potential future market frameworks in light of state decarbonization goals.” The stakeholder-led discussion “seeks to determine how best to harmonize the achievement of three objectives: carbon reduction, reliability, and using markets to select the lowest-priced resources,” he said.

The issue has also garnered attention on a federal level. In February, for example, Democrats in the U.S. House tasked the federal International Trade Commission (ITC) with investigating how how New England’s increasing renewable targets are economically affecting the region, and what role renewable imports play in meeting those commitments. In his letter to the ITC, Richard Neal (D-Mass.), chair of the House Ways and Means Committee, noted that over the past three decades, Massachusetts “has seen the retirement of both nuclear and coal-generated power plants across the Commonwealth.” He added: “With these facilities offline, there has been a growing strain on the ability of New England’s bulk power generation and transmission system to meet the demands of consumers. High electricity rates undermine the competitiveness of Massachusetts businesses and make it difficult for residents, particularly low-income households to afford their utility bills.”

During the briefing, van Welie also addressed concerns that the region was leaning too heavily on natural gas generation to offset coal and nuclear closures. Some stakeholders have voiced concerns about reliability, especially as it relates to the constrained natural gas supply during the winter, and indeterminate liquefied natural gas (LNG) and fuel oil deliveries. In its latest long-term reliability report, the North American Electric Reliability Corp. (NERC) said the region’s reliability risks are compounded by infrastructure and operational pressure from a surge in intermittent wind, solar, and hydro resources, as well as environmental permitting difficulties for new dual-fuel capability gas units.

Van Welie said that ISO-NE and regional stakeholders have been working on a market enhancement, the Energy Security Improvements (ESI) initiative, that is designed to keep the system reliable during energy-limited conditions, such as extreme cold weather. The mechanism, which is expected to be in place by mid-2024, may also help the grid to transition away from fossil fuel to intermittent renewables, because it will introduce stronger, market-based compensation for energy and reserve services, and it will select the least-cost resources to provide electrical energy when called on by the ISO, he said.

“For example, a solar facility with battery storage has the same opportunity to provide these reliability services as a natural gas plant with a contract for liquefied natural gas, or an offshore wind farm that operates at a high capacity factor during winter. All may participate and be paid under the ESI design,” he said.

For now, ISO-NE plans to file the mechanism with the Federal Energy Regulatory Commission (FERC) this April, calling first for an option-based services in the day-ahead markets that compensate for the flexibility of energy “on demand” to manage uncertainties each operating day. The ESI design will seek to “firm up and formalize” the option to call on 3,500 to 5,000 MW of potential energy “in reserve” each day through generation contingency reserves, replacement energy reserves, and energy imbalance reserves. Over the coming year, ISO-NE then plans to develop a new, seasonal forward market auction that it says “awards competitive, resource-neutral forward contracts to reduce both investors’ and consumers’ risks of achieving any combination of more reliable energy supplies or longer-term (multi-month) energy-storage arrangements.”

Meanwhile, the need for the Competitive Auctions for Sponsored Policy Resources (CASPR), a mechanism the ISO introduced in 2019 to help bring more state-sponsored renewable resources onto the grid, should “diminish” in the coming years as renewables become more cost-competitive, said van Welie.

Still, according to ISO-NE’s 2020 Regional Electricity Outlook, the fix for the region’s dependence on “just-in-time” delivery of natural gas won’t likely dissipate until storage technologies can supply much more energy for extended periods. Noting that it has no authority over pipelines or other fuel infrastructure that supply New England’s power plants, the ISO will continue to rely on its “ability to develop market rules that result in accurate pricing signals that incentivize power suppliers to make investments in their generation facilities and fuel-supply arrangements to operate reliably and profitably.”

Over the past year, for example, it sought to temporarily keep Units 8 and 9—a total capacity of 1,700 MW—at Exelon’s natural gas-fired Mystic Generation Station in Everett, Massachusetts, from retiring using a special cost-of-service contract that covers a two-year term, from June 2022 to May 2024. FERC gave ISO New England its approval to retain the resources from retiring for a limited period based on the region’s fuel-security reliability challenges in winter.

The measure, however, garnered much interest from competitive market participants and observers, and some experts noted, it could substantially impact the future of the restructured administrative market model, which has been besieged by “extra-market” interventions.

On March 9, notably, FERC rejected a proposal from ISO-NE that sought to prioritize competitive processes—including long-term market design changes to address fuel security and the expected competitive transmission solutions— over out-of-market resource retention. Exelon filed a protest in the case, arguing, among other things, that the proposal was premature and ignored the likelihood that neither the Boston-area transmission upgrades nor the long-term fuel security market mechanism would be completed and implemented by the time the cost-of-service agreement expires. “While we favor limiting the scope and length of out-of-market actions, we seek to balance that objective against the ability to address reliability concerns,” FERC said.

For its part, ISO-NE is now looking at developing a temporary “Inventoried Energy Program”— a short-term, stop-gap program that will go into effect for the winters of 2023/2024 and 2024/2025. “This mechanism provides revenues to resources with inventoried energy that contribute to reliable operations during cold winter conditions and reduce the potential for these resources to retire prematurely for uneconomic reasons,” ISO-NE said.