In the U.S., where electricity service is so reliable that it is taken for granted, one catastrophic failure can overshadow decades of flawless performance. Such was the case on August 14, 2003, when a blackout spanning several northeastern states spawned moving and still images of food spoiling in dark refrigerators, darkened streets with disabled traffic lights, and thousands of commuters who had been stranded by stalled subways fleeing the island of Manhattan on foot over bridges. In the blink of an eye, the blackout reminded Americans how vulnerable their interconnected electricity and distribution grids are to cascading outages.

The consequences of the Great Northeast Blackout, which affected 50 million people and over 61,000 MW of load, remain etched in the collective mind of the U.S. electric utility industry. Following is a breakdown of the reasons why 531 generating units at 263 power plants had to be shut down temporarily:

The cost of the outage (Figure 1) has been estimated at between $4 billion and $10 billion. In addition to taking tolls on the economy and human health and safety, the blackout made clear that national security is compromised when our electrical grids are disabled. 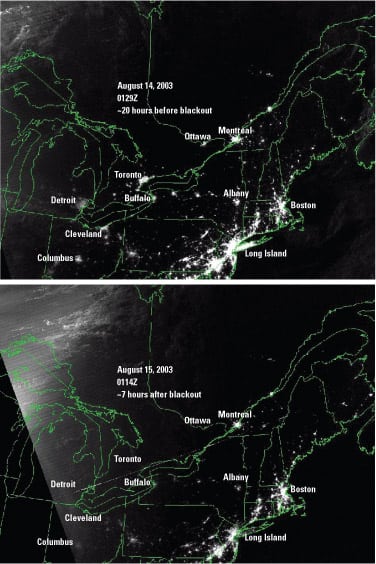 1. Lights out. The U.S. Northeast before (top) and after (bottom) the blackout of August 14, 2003. Since then, the North American Electric Reliability Corp. has been charged with promulgating and enforcing mandatory reliability rules to prevent recurrences of such blackouts. Courtesy: National Oceanographic & Atmospheric Administration/Defense Meteorological Satellite Program

Following the widespread outage, the industry characterized its revitalized commitment to service excellence as a "culture of compliance." To prepare for the June 4 deadline for mandatory compliance with reliability standards devised by the North American Electric Reliability Corp. (NERC), some large utilities reorganized their executive management teams to enable devotion of the proper attention and resources to compliance issues. Others have sadly taken the position that their compliance responsibilities are limited to periodically filling out GADS (generating availability data system) or EIA (environmental impact assessment) reporting forms. Some have assigned the reporting duty to low-level managers—many of whom have never heard of NERC and who know nothing about the content, structure, or intent of the new reliability standards.

Utilities in the latter camp either have made a very risky strategic decision or do not understand the true risks of noncompliance. Congress and the Federal Energy Regulatory Commission (FERC) have done their part to highlight them. The maximum FERC sanction of $1 million per day per violation, once thought an unlikely level, is now expected by many to become common as the reliability regime is implemented. However, within some companies, the consequences of the sanctions pale in comparison with the other risks inherent in a poor service record.

A confirmed violator of the reliability standards will endure withering scrutiny. Publicly held companies can expect downward pressure on their equity valuation if Wall Street were to glance at NERC’s web site and discover the utility’s sin(s)—a move that will likely be encouraged by competitors. Such a finding will reflect poorly on the company’s corporate management ability, its commitment to operational excellence, and its expertise operating its own equipment.

Confirmed violations may also strain relationships between utilities and their state regulators. Billions of dollars in rate recovery have been granted over the years in the name of "reliability." Now, the results of those investments will be vetted in a bright public light. State utility commissions will expect their regulated entities to comply with and, in fact, excel at complying with the new, mandatory standards. Failure to do so will undermine future requests for favorable rate treatment or facility expansions.

Independent power producers (IPPs) and unaffiliated merchant generators will find compliance a major issue as well, but for different reasons. Although their rates or transactions aren’t regulated, this class of power producers needs to respond to requests for proposals for capacity issued by load-serving entities. Some believe that within the first year of the mandatory compliance regime, a satisfactory (if not blemish-free) record of compliance will become a prerequisite for bidder selection. With public disclosure of violations, there will be nowhere to hide major or minor indiscretions. What level of risk will a buyer be willing to accept from a supplier that cannot, or will not, take basic reliability measures?

Banks and equity lenders that finance acquisitions and greenfield projects will bring their own perspective to scrutiny of reliability records. If they question the operational acumen and management ability of a repeat violator, they may devalue all of its generating assets, even those with excellent forced outage rating, low heat rates, and superior environmental performance. Due diligence will surely include compliance records in coming months and years. A flawless corporate track record will be prized by both sellers and buyers of assets.

Encompassing all of these concerns will be the new reality of what it means to be a contributor to the interconnected U.S. electric system (Figure 2). In terms of national security, it means each operating entity is responsible for a link in the chain of protection for critical components of the economy. Failure to proactively commit to a program of compliance with the reliability standards will be viewed in public forums as an abdication of that responsibility.

The June 4 date for mandatory enforcement of NERC’s reliability standards has already passed. If the responsible entities at utilities, IPPs, and unaffiliated merchant generators are still uncertain which standards apply to them, they should find out quickly. Ignorance of the law is no defense against allegations of infractions.

Even IPPs, if they look at the fine print of their contracts and interconnection agreements, will likely find passages that mandate their compliance with all regional reliability requirements. They should realize that the past focus of regional electric reliability organizations (EROs) on utilities has already begun to broaden. Through delegation agreements with the EROs, regional entities now must monitor all parties responsible for complying with reliability standards.

The set of standards devoted to critical infrastructure protection (CIP) has captured the attention of stakeholders and service providers as mandatory compliance has drawn nearer. FERC has decided to process the CIP Standards through separate notices of proposed rulemaking devoted to them. In the interim, responsible entities will be expected to comply with the standards in their existing form.

Although compliance with the CIP standards will require huge investments of time and resources by responsible entities, CIP standards are only a subset of a larger group of standards that will become enforceable. If a responsible entity has fulfilled his or her company’s type-specific implementation plan requirements by the date specified, and has either completed or documented plans to make risk-based assessments of facilities, he or she should be in good shape for June 4.

A well-conceived compliance program should include a change management feature that will not only enable awareness of changes but also flag opportunities for participation in the revision process. Active participation is essential to ensuring that the particular concerns and operational realties of every stakeholder are addressed and made public in the posting, response, and balloting process for changing standards. Ignoring this part of the process by simply waiting to see what it produces would be a risky strategy, indeed.

—By Jim Stanton, POWER contributing editor and project manager at ICF International. He can be reached at jstanton@icfi.com.

Synthetic-base oils are designed to provide specific performance benefits over traditional lubricants based on mineral oils. Synthetics are produced by chemically reacting pure compounds (a process called chemical synthesis) or by severely hydroprocessing petroleum-derived mineral oils. Each process creates a carefully controlled, uniform molecular structure that gives a synthetic oil a more predictable performance and tailors it for specific applications.

Mineral oils, by contrast, are produced by refining crude petroleum oils. By its nature, the chemical makeup of mineral oil is inconsistent and widely variable, making it less than ideal for certain applications (Figure 3).

3. Consistency is key. Because the size, shape, and weight of synthetic oil molecules are more uniform those of mineral oils, they have more predictable properties. Source: ConocoPhillips Lubricants

Many synthetics to choose from

The advantages of synthetic lubricants over mineral-based lubricants vary as a function of operating conditions and application. But it is safe to say that synthetics are the logical choice for a wide variety of industrial needs. One of the greatest assets of synthetic oil is its ability to be custom-tailored to predetermined specifications. This customization produces specific performance benefits that are greater than those of traditional mineral oil lubricants.

The high level of saturates found in synthetic oils is another plus because it raises their viscosity index and, in turn, extends their range of service temperatures. Synthetics also have better flow characteristics than conventional oils at extremely low temperatures and enhanced thermal and oxidative stability at extremely high temperatures. This makes them great problem-solvers, especially in arctic operating environments.

Finally, using synthetics in industrial applications has proven to reduce energy costs—typically the largest expense of operating equipment and machinery. Studies have shown that use of synthetic oils can lower energy consumption; reduce friction, corrosion, and deposits; and ultimately help extend the life of industrial equipment. The minimal maintenance and energy consumption of equipment lubricated by synthetics drastically reduces a plant’s costs and improves its overall bottom line.

With a little understanding of how synthetics differ from traditional mineral oils, and the potential benefits of using them in industrial equipment, making the switch from mineral to synthetic oils could benefit your plant from both an operational and financial standpoint.