To supplement domestic natural gas supplies, the U.S. is expected to increase its dependence on offshore liquefied natural gas suppliers in the coming years. However, the composition and hydrocarbon content of imported LNG may significantly vary from those of North American sources. Variation in fuel composition may lead to plants using fuel that violates their combustion turbine fuel specifications and may cause operational problems.

Offshore liquefied natural gas (LNG) suppliers are satisfying the difference between rising demand and declining U.S. domestic production of natural gas and Canadian imports. For example, Gazprom and Shell announced in April that LNG from the Sakhalin-2 project, located off Russia’s eastern coast, will enter the U.S. market through the Energia Costa Azul import terminal in Baja California, Mexico, and eventually make its way into Southern California. The Sakhalin-2 project is expected to produce about 5% of the world’s LNG next year (Figure 1). Although access to new supplies is a good development, Siemens’ research has indicated that the composition and hydrocarbon content of imported LNG can significantly vary from current domestic sources and may cause operational problems.

1.    East meets West. The first Russian LNG plant on Sakhalin Island consists of two process trains, each having an annual production capacity of 4.8 million tons. The plant is projected to reach its design capacity (9.6 million tons per year) in 2010. Courtesy: Gazprom

The process of importing LNG begins with liquefying gaseous natural gas at the source to cryogenic temperatures on the order of – 260F. The liquefied gas is then loaded into well-insulated ship-mounted storage tanks for transport to one of several U.S. receiving terminals (currently, there are reportedly eight in operation). When the LNG arrives, the liquefied gas is regasified before entering the gas distribution pipelines. The fact that the Federal Energy Regulatory Commission is tracking 28 new approved LNG terminal projects or expansion projects indicates the expected growth in LNG imports in the coming years.

The liquefaction and regasification processes also enable removal of some of the inert components — such as nitrogen gas (N2), carbon dioxide (CO2), and higher hydrocarbons (C6+) — while retaining all of the original amounts of ethane, propane, and butane. The result can be an LNG-derived gas that can have a wide range of Wobbe Index (defined as higher heating value divided by the square root of specific gravity) and variable energy content per cubic foot when compared with domestic natural gas.

The rate of variation of constituents (fuel composition) in LNG-based gaseous fuels can adversely impact the operation of power generation turbines. The nature of LNG is such that the composition of the fuel may significantly change even from shipment to shipment over a matter of days or even several times in a given day. The rate of change in fuel constituents also depends on the location of the unit on the gas supply pipeline network. For example, a unit that is close to a pipeline node and receives gas from two or more sources could be more susceptible to fuel composition variation.

Combustion turbine fuel flexibility is strongly related to the type of combustion system design used in a given turbine. Conventional diffusion flame combustion systems are more tolerant of wide variations in fuel composition but may not always be appropriate where lower turbine NOx emissions are sought. The more advanced premixed flame combustors, the dry low-NOx (DLN) and ultra-low-NOx (ULN) combustion systems, typically perform better in terms of lower NOx emissions, but both demand tighter control over the variability of the gaseous fuel constituents.

LNG users may expect some variation in fuel composition if their turbine fuel supply contains a percentage of LNG, and they will need to assess that variation in light of applicable original equipment manufacturer fuel specifications. Apart from the potential effect of voiding warranties, operational issues — such as combustion dynamics, flashback, increased emissions, or decreased component life — can occur. Another potential issue that may arise from a sudden change in fuel composition is substantial and unexpected load swings. Luckily, there is a solution.

We believe a combustion turbine with properly matched fuel system hardware can be capable of operating on many LNG-type fuels while maintaining emissions and other operational parameters. The key to success is selecting the right equipment for a particular application and a firm understanding of equipment performance under a wide range of fuel characteristics.

The initial step for the fuel flexibility development project was a careful evaluation of most of our commercially available combustion system configurations and then down-selecting the most robust configurations of combustion hardware capable of handling wide changes in fuel composition.

The selection process came after many hours of rig and field testing to confirm the equipment selections. Siemens has completed multiple LNG test campaigns for the SGT6-5000F (W501F) engine, both in test rigs and in operating engines. Rig tests for the SGT6-3000E (W501D5A) and the SGT6-6000G (W501G) also have been completed. These tests have added substantial operating information to our extensive knowledge base of combustion system design practices, especially the challenges presented with burning LNG and high – Wobbe Index fuels.

Siemens has also reviewed information regarding U.S. and global gas reserves. Our review showed that U.S. domestic natural gas reserves have had a Wobbe Index value in the range of approximately 1,315 to 1,370 Btu/scf (Figure 2). However, in our review of information on global gas reserves, the Wobbe Indices of the fuels from the international sources showed more variation, with reported values ranging from 1,366 to 1,441 Btu/scf.

Our research also concluded that, in addition to the variation in heat content, individual components in the LNG varied widely among sources. However, it was observed that the maximum percentages of the higher hydrocarbons was about 14% ethane, 4% propane, and 2.5% butane, but these maximum percentages were not all found in a particular fuel gas at the same time. Considering the wide range in fuel constituents and heat content, Siemens opted to use three representative fuels for its testing regimen (Table 1).

We expect interest in DLN- and ULN-equipped turbines will continue to increase in the future because the regulatory drive to reduce NOx emissions remains strong. We also expect that the fraction of LNG in our pipelines will rise even if the levels are typically small today. Lacking LNG in the fuel gas pipeline that met our testing specifications at our test facility, our challenge was to find the means to test the impact of various LNG fuels on combustion tuning. Mixing skids were installed to blend the different fuel components to simulate LNG blends. Figure 3 shows the combustor test rig and mixing skid used during our simulated LNG tests. 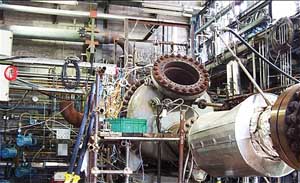 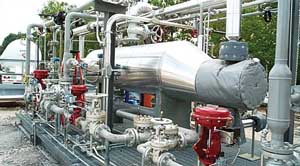 The objective of these rig tests was to determine the operating and emissions characteristics of the combustion system on a range of fuels, from typical natural gas through LNG fuels. These tests were conducted at the normal steady state operating range and from partial load to baseload for all fuel compositions mentioned above. Ignition tests were also performed to confirm successful gas ignition in the combustor using both natural gas and LNG fuels.

At the conclusion of this series of tests, we found that typically NOx output increased with an increase in the Wobbe Index of the three test fuels (Figure 4). We also found that an increase in Wobbe Index increased the propensity of flashback (the progression of flame in the reverse direction of flow and possible attachment to combustor hardware). Flashback can be a significant issue during combustion turbine operation, as it can reduce combustor life and, in extreme cases, cause combustor damage and extensive repairs. 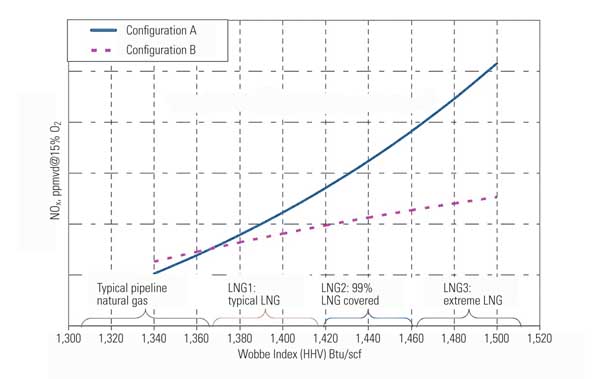 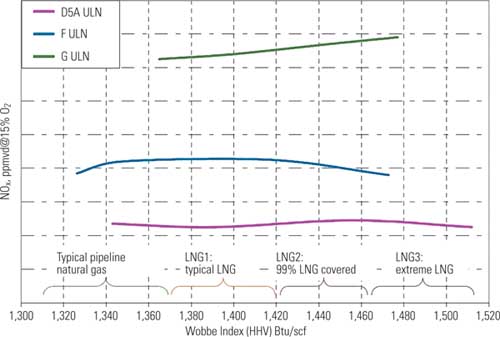 5.    ULN fuel flexibility testing. This graph shows the typical response of the ultra-low-NOx combustion system for different gas turbine frames for NOx emissions. A ULN system is much less susceptible to wider constituent variations that may be present in LNG. Source: Siemens Energy Inc.

Overall, we found that many LNG-type fuels can be considered for use in Siemens combustion turbines if certain modifications are made to those turbines. These modifications can include either the installation of the preferred combustion hardware identified from the rig and engine tests described above or the combustion hardware along with the Integrated Fuel Gas Characterization (IFGC) system designed to tune the combustor in real time within defined changes in fuel composition. Site-specific evaluation is required to determine required system modifications for the unit based on current configuration, expected fuels, and desired emission levels.

The typical combustion turbine must be manually tuned, if possible, to operate efficiently across its design load range when a new gas fuel is introduced. Manual tuning is out of the question when the composition of fuel is found to change rapidly. 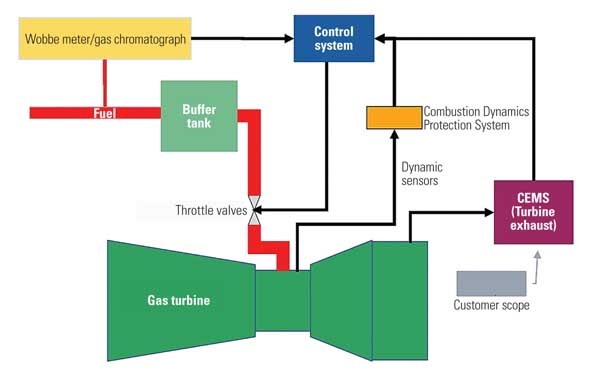 The IFGC also addresses the possibility of poor light-off events associated with fuel quality. The IFGC, with its feed-forward control, can accommodate many fuel quality variations and help ensure adequate fuel flow for light-off. Flashback, another issue for LNG fuels, is also dependent on fuel composition. The IFGC feed-forward system using the buffer tank is intended to adjust the control settings to minimize flashback.

The CDPS system can help mitigate potentially destructive combustion dynamics and out-of-specification emissions. The CDPS is an active control dynamics monitoring and control system. The CDPS receives signals from the plant’s continuous emissions monitoring system, located at the turbine exhaust, and compares this information with the unit-specific emissions permit. Depending on the variation between the two numbers, the CDPS is designed to adjust the control settings to maintain emissions and acceptable levels of combustion dynamics. The IFGC and CDPS together adjust real-time fuel settings based on operational conditions like fuel gas variability, combustion dynamics, and the like.

Subsequent to the engine and rig tests, Siemens prepared a fuel specification that allows a wider range of fuels for the SGT6-5000F, which can be implemented on units that have installed the appropriate combustion and IFGC hardware. A site-specific evaluation is required to assess the hardware, control systems, and other equipment that may be necessary to safely burn LNG.

Note that unless and until all of these upgades are installed, and Siemens has issued a revised fuel specification for each specific unit, operators must continue to follow the fuel specifications in their contracts.

Table 2.    Add more fuel flexibility. Siemens has developed a more flexible combustion turbine fuel specification to accommodate a wider range of LNG content in commercial natural gas supplies. The specification can be implemented on certain units on a case-by-case basis. Installation of specific component upgrades and a modified fuel specification may be required by Siemens. Source: Siemens Energy Inc.

The authors would like to acknowledge the core team that has made this development a success. In alphabetical order, they are Khalil Abou-Jaoude, Richard Bunce, Jacqueline Engel, Matthew LaGrow, Steve Mumford, Bruce Rising, Fred Shoemaker, Damien Teehan, and Jianfan Wu.